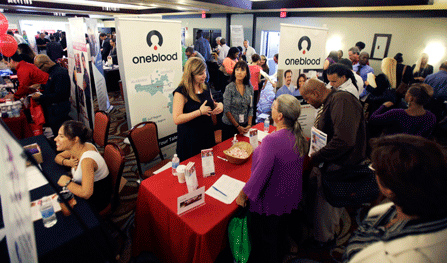 Caption Job seekers at this Florida job fair in Miami Lakes check out companies offering more than 2,000 employment opportunities. Florida added the most jobs in the last month. (AP)

Nevada once again leads the nation with the highest unemployment rate, but its 9.3 percent rate in October is the lowest in five years.

Nationwide, nine states and the District of Columbia had measurably higher unemployment rates than the national rate of 7.3 percent, the U.S. Bureau of Labor Statistics said in the first state-by-state unemployment report since the federal government shutdown ended.

Nevada's rate is the lowest jobless there rate since December 2008.  “Overall, the state is moving in a positive direction, with the unemployment rate continuing to fall and employers continuing to add jobs,” Bill Anderson, chief economist for Nevada's Department of Employment, said in a statement.

In Illinois, Jay Rowell, director of the state's Department of Employment Security, called the state's 8.9 percent unemployment rate “encouraging,” particularly because of job growth in manufacturing and retail trade. “Manufacturing numbers show continued growth in Illinois and retail trade growth anticipates shoppers willing to spend with the potential for additional hires in November," he said.

Florida's unemployment rate is down 4.4 percentage points since December 2010 and has remained below the national average since March of this year.  The Tampa-St. Petersburg-Clearwater area led all Florida metro areas in job creation in the last year, the state announced, with a gain of more than 39,800 new jobs.

Georgia has seen its rate decline to 8.1 for October, from 8.7 percent in August and 8.3 in September. “We've seen Georgia gain almost 30,000 jobs over the last two months,” State Labor Commissioner Mark Butler said. “And, the good thing about the job creation is that it's pretty much through all sectors.”

Meanwhile, Connecticut hit a milestone with its lowest unemployment rate since the recovery began in in February 2010, dipping to 7.9 percent in both October and September from 8.1 percent in August. That marks the first time the state's jobless rate was below 8 percent since April 2009.

Seventeen states had jobless rates significantly lower than the U.S. average of 7.3 percent and 24 states had rates that were not appreciably different from that of the nation, BLS said.

North Dakota continued to have the lowest jobless rate at 2.7 percent.