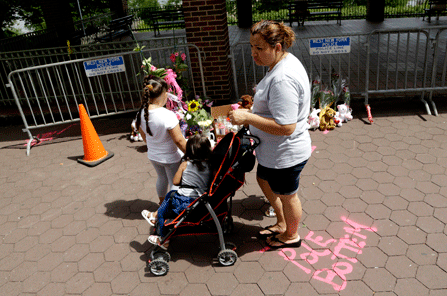 A makeshift memorial in New Jersey marks the spot where an 8-month-old girl died in an accident caused by a distracted bus driver in July. High-profile accidents have prompted regulators and transit agencies to crack down on distracted driving by bus and train operators. (AP)

An 8-month old girl in a stroller was killed when a bus driver talking on a cell phone jumped the curb and toppled a light pole in a New Jersey suburb last July. Seven bystanders were injured in the accident.

The accident focused the public's attention on the tragic consequences of distracted driving, especially among the operators of large passenger vehicles such as buses and trains.

Data on how often distracted bus and train drivers cause accidents are scant. But the incidents draw outsized attention because of how many passengers are potentially in danger, the size of the vehicles and the public nature of the drivers' jobs.

California high-speed rail officials had to reassure the public their trains were safe, after a Spanish train crashed this summer killing 79 people. The driver of the Spanish train was talking on the phone and traveling at 95 mph — twice the speed limit — when the train derailed.

More minor incidents have sparked uproars, too. For example, a school bus driver near Tampa, Fla., was suspended after an eighth-grade student shot a video of the driver texting while driving. In Kansas City, a bus driver reaching down to grab something hit an 86-year-old woman in a crosswalk, dragging her half a block. The woman suffered several broken bones.

Regulators are cracking down on distracted driving among all drivers, and that includes the professional operators of large vehicles. The industry standards for transit systems, for example, say drivers should turn off mobile phones and stow them while they drive.

The American Public Transportation Association, a group of public transit agencies, set the standards in 2009. The group also agreed to promote reducing interruptions caused by transit agencies from fare boxes, on-board alerts and dispatchers. The measures are voluntary, but they are almost universally adopted, said Bill Grizard, APTA's safety director.

Cutting down on distractions for bus drivers is especially important, because these drivers already have many other things to do besides driving, Grizard said, including customer service and taking fares. Transit agencies routinely test drivers on all of those tasks.

“If they are good drivers, they might not pass those tests because there are all of these other responsibilities they assume and have to deal well with,” Grizard said.

Train operators also cannot afford to be distracted since they have to follow signals and keep an eye out for obstacles or signals that are missing or misaligned, Grizard said.

Rail and bus drivers are subject to different laws and regulations on distracted driving. The federal government regulates rail more heavily. Buses that cross state lines are subject to federal rules, while local buses can sometimes escape most regulation.

Two years ago, the U.S. Department of Transportation banned the roughly 4 million drivers of trucks and interstate buses from using hand-held phones while they are driving.

States are following suit, said Stephen Keppler, executive director of the Commercial Vehicle Safety Alliance, a group of regulators who oversee private trucks and buses. About half of states automatically incorporate changes in federal rules into their own regulations, he said, while the rest go through a rule-making process or through the legislature.

Some believe the focus on distracted driving is misplaced. Larry Hanley, president of the Amalgamated Transit Union, called the surge in rules “distracted legislating,” because what little data is available show only a small number of fatal bus crashes are caused by driver distractions. Driver “inattention” caused 13 percent of fatal motor coach accidents (and 6 percent of fatalities), according to a U.S. Department of Transportation review of fatal accidents between 2001 and 2010.

Regulators ought to focus their attention on more significant issues, he said, especially driver fatigue, a factor in more than a third of fatal bus crashes.

In the end, many regulations, including those addressing distracted driving, are not well-enforced by the federal or state governments, Hanley said.

Large operators — such as transit systems or big bus companies — can more easily handle safety standards, such as testing drivers for illegal drugs or keeping buses well-maintained, he said.

But he said smaller operations and their drivers often do not keep up with those rules, because they do not have the economic incentives to do so. The small companies face little chance of getting caught if they cut corners, but they must still compete with larger carriers on cost, Hanley said.

One way they save money is by paying drivers low wages, but that means the drivers must work long hours or multiple jobs to make a living — raising the risk of driver fatigue, he said.

“Enforcement and regulations tend to follow tombstones. As people die, and as newspapers cover it, politicians snap into action and do some things,” Hanley said. “The trouble is they have to have the guts to say there has to be a change in work rules.”

Transit agencies have tried many approaches to combat distracted driving, said Grizard, the APTA safety director. Boston transit drivers are not allowed to bring their phones on board, while bus drivers in Nashville lock away their phones in boxes while they are on the road, he said.

Dallas Area Rapid Transit highlighted one of its own drivers in a flier sent to its bus drivers. It showed a photo taken by a member of the public of a DART driver reading a book laid across the steering wheel at a stoplight. It included several reminders about the dangers of distracted driving.

But it was only one piece in a broad effort to combat distractions on the road. The agency has incorporated lessons on distracted driving in its regular training process. It has also required bus drivers to turn off their phones and stow them before getting on the road. If bus drivers need to make a call as part of their job, they must get off the bus and make the call outside.

“If you have (a phone) on your person, you're much more likely to want to—or feel the need to—respond to that,” said Tim Newby, the agency's vice president of transportation.

Over the last three years, the agency has seen a 48 percent reduction in complaints from riders about distracted drivers, Newby said.

The agency is also getting a better handle on being able to see what role distracted driving plays in bus crashes. DART is in the process of rolling out new buses that carry cameras. They can record what happens shortly before a bus stops suddenly, accelerates rapidly or makes a sharp turn. The agency can review footage later to see why a driver made such sudden changes.

Keppler, from the regulators group, said the proliferation of cell phones among passengers has helped crack down on distracted driving among drivers, since it is easier than ever to take pictures or videos of distracted drivers.

“You can look at the passengers being a distraction, but you can also look at them as their own enforcers,” Keppler said. “They're watching the driver.”