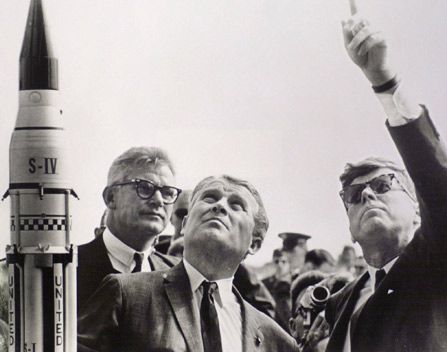 As the Minotaur 1 rocket launched from Virginia and Maryland's spaceport Tuesday night, it provided a subtle reminder of President John F. Kennedy's legacy. It was his commitment to getting a man on the moon that launched American space exploration and transformed rural Southern economies with high-paying science jobs.

Looking back on Kennedy's presidency after 50 years, states can be thankful for the space program, which brought jobs and investment to states including Florida, Texas, Mississippi and California, and swelled the ranks of NASA contractors nationwide.

Making the moon mission a top priority came with hefty funding for NASA -- $5.2 billion at its peak in 1965, which then amounted to 5 percent of the federal budget.

At the beginning of 1966, at least 420,000 people were working directly or indirectly for NASA. More than 18,000 of those employees worked at the John F. Kennedy Space Center in Cape Canaveral, Fla. That's roughly the same size of NASA's entire workforce in 2013.

Kennedy's signature domestic policy challenge to America was as much a tactic of the Cold War as it was an interest in space.

Getting to the moon, Kennedy told NASA administrator James Webb in an Oval Office meeting in 1962, “is important for political reasons, international political reasons. This is, whether we like it or not, in a sense a race,” Kennedy said.

“If we get second to the moon, it's nice, but it's like being second any time,” said Kennedy. “So that if we're second by six months, because we didn't give it the kind of priority, then of course that would be very serious. So I think we have to take the view that this is the top priority with us.”

The aerospace industry is still a major force in the Southern economy, even as NASA budgets have steadily declined since astronauts Neil Armstrong and Buzz Aldrin walked on the moon in 1969. Private companies, including Boeing, have pledged to build spacecraft in Florida and Alabama in the coming years.