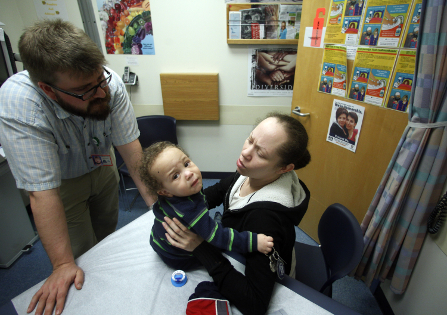 A nurse practitioner examines a child at the Mid-County Health Center in Portland, Ore. Oregon is one of six states that is using grants under the ACA to experiment with new ways to pay for health care. (AP)

The primary aim of the Affordable Care Act is to reduce the number of uninsured Americans.  Even if the new federal health law accomplishes that goal, states still must grapple with the relatively high cost and low quality of U.S. health care.

Per person, the U.S. spends far more than any other country on health care—and yet it gets relatively poor results for its money. It lags behind other countries on many health measures, and according to a recent report by the U.S. Institute of Medicine, about one-third of the $2.6 trillion Americans spent on health care last year paid for unnecessary procedures and avoidable hospital admissions.

Under the current “fee-for-service” system, health care providers are paid per office visit or procedure performed. The key to cutting costs and improving quality, many experts believe, is to reward health care providers for keeping their patients healthy and keeping costs down, instead of giving them a financial incentive to provide as many services and procedures as possible.

Out of the $1.8 trillion the ACA is projected to cost over the next decade, $10 billion is dedicated to innovation programs.  A unit of the U.S. Department of Health and Human Services known as the Center for Medicare and Medicaid Innovation reviews applications and approves the grants.

“The idea is to take governors up on their claim that states are the laboratories of democracy where meaningful innovations can occur,” said Susan Dentzer of the Robert Wood Johnson Foundation, a nonprofit group that promotes improvements in the U.S. health care system.

A common theme is connecting more people to “patient-centered medical homes” where “care coordinators” ensure they receive cancer screenings and other preventive care. For those with chronic illnesses such as diabetes, high blood pressure and heart disease, the goal is to avoid expensive hospitalizations by managing their conditions with medicine and lifestyle changes.

Some states are using ACA money to engage in other experiments. Vermont, for example, is examining whether it can save money on health care by spending more on its schools, since people who attain higher education levels tend to be healthier.

Under the innovation grant program, states must convince private insurers, major employers and Medicare to join their experiments, in the hope that their combined market power will force even the most prestigious health care providers to pay attention, said Sharon Silow-Carroll, a health care consultant with Health Management Associates. In addition, standardizing quality measures and payment policies among all payers should make it easier for health care providers to comply, she said.

Following is a rundown of what each state plans to do with its ACA grant:

Arkansas' plan is to include nearly all residents in patient-centered medical homes by 2016. In addition, the state will use its $42 million grant to expand an existing care delivery model that rewards Medicaid health care providers who deliver high-quality, cost-effective care for specific conditions such as pregnancy, the common cold, and attention deficit and hyperactivity disorder (ADHD). The state's two major private insurance carriers, one of which insures state workers, have agreed to use similar payment methods for costly procedures such as knee replacements. Over time, Arkansas plans to add additional conditions to its cost-cutting “episodes of care” model.

Maine's largest health care providers have already joined accountable care organizations to better serve Medicare patients. Building on that success, the state is asking providers to set up similar arrangements for patients covered by Medicaid and private insurance. The state will use its $33 million grant to help physician practices and hospitals develop these new entities.

Massachusetts, with an uninsured rate of less than 4 percent, is ahead of most states in attacking health care cost and quality issues. Its $44 million innovation grant builds on a number of initiatives included in a broad cost containment law passed in 2012.  The overall goal is to expand and improve patient-centered medical homes for Medicaid enrollees, and help extend them to patients covered by private insurance.

Minnesota will use its $45 million grant to build on existing Medicaid accountable care organizations that providers began voluntarily forming last January. About 100,000 Medicaid patients are already being served under the new financing model. The plan is to expand it statewide within three years. Minnesota has a head start in aligning payment policies across payers because commercial insurers in the states have been using similar financing arrangements for the past five years.

Oregon is building on a model it calls “coordinated care organizations,” which began serving Medicaid patients last year. These groups, which have agreed to an annual limit on costs, include physicians, hospitals, community health centers and other social services organizations. The plan is to use its $45 million grant to expand the model to state employees in 2014 and then to people covered by health plans purchased on the exchange.

Vermont will use its $45 million grant to improve existing patient-centered medical homes it launched in 2007.  Nearly all primary care practices, all hospitals and most community health centers in the state already are using similar quality measures and payment schemes for Medicare, Medicaid and privately insured patients.