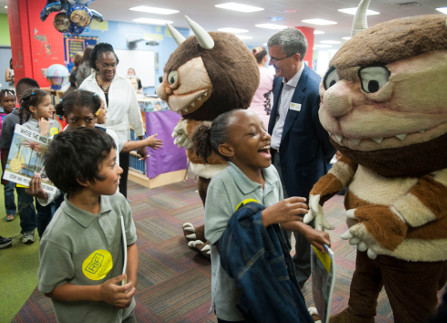 Students say goodbye to the monsters after a recent reading of "Where the Wild Things Are" at Amidon-Bowen Elementary School in Washington, D.C. A number of states have adopted policies to try to ensure students are reading proficiently by the third grade, which researchers say is a critical milestone for learning. (AP)

One recent study found that students who don't read well by the third grade are four times more likely to drop out of high school.

Despite progress in some states, only 35 percent of fourth graders across the country are proficient in reading, according to the most recent National Assessment of Educational Progress (NAEP), released earlier this month.

“I think it's an outrage,” said Carol Rasco, chief executive officer of Reading is Fundamental, a children's literacy nonprofit organization that distributes millions of books to needy children every year. “To me, that's an emergency. It's a crisis.”

States across the country appear to agree. About 30 states have adopted measures to try to meet the reading milestone, according to Ralph Smith, managing director of the Campaign for Grade-Level Reading, a collaboration of nonprofits, foundations and communities. Last month, the National Governors Association released a report urging governors to take five policy actions to improve reading by the third grade.

The strategies vary widely, including working with parents of young children and improving access to pre-kindergarten.

Retention policies, which typically require third graders to pass reading benchmarks before being promoted to fourth grade, are among the most controversial approaches.

Fifteen states and the District of Columbia have strict retention policies on third grade reading, which often call for schools to help students who are struggling before they reach third grade, according to Emily Workman, a policy analyst for the Education Commission of the States.

Many of the states followed the path of Florida, where reading scores jumped after 2003, when the state started requiring third graders who did not meet reading benchmarks to be held back.

This year, Mississippi adopted a law requiring third graders who can't read proficiently to be retained, and third graders in Ohio and Arizona are facing similar reading mandates for the first time. In Arizona, officials estimate 1,500 third graders could be held back if they do not pass the new reading requirement, the Arizona Republic reported.

A handful of states this year have adopted other kinds of laws aimed at improving early reading, Workman said, including:

“It is the transition point between learning to read and reading to learn,” said Susan Neuman, an expert on early literacy at the University of Michigan. “If these children don't have the (reading) skills, they are really going to fall behind not only in reading but in all the other subject areas.”

But reading scores are notoriously difficult to improve. While math scores on tests such as NAEP have improved substantially since testing began in the early 1990s, reading scores have  increased only by slim margins. Experts believe that's because children learn math mostly at school, while they learn most of their language skills at home, much of it before they even enter school.

Neuman said that means states wanting to make significant improvements in early reading need to target parents before their children reach school, or even preschool.

“Universal pre-k is terrific, but it starts at age four,” Neuman said. “We know these disparities begin as early as 12 months. What we need are parent engagement policies that work with parents very early on to promote what we know are really good language strategies.”

Despite Florida's apparent success, the research on retention policies is mixed. Smith, of the Campaign for Grade-Level Reading, said the intermediate steps before either promotion or retention, including intervention for struggling readers and providing incentives and instruction to teachers, may prove most useful.

“We'll start very early with a hug and a smile and a focus on getting that parent to do eye-to-eye contact with the child, to talk to them, to sing to them,” Neuman said. “There are things we can do very early on that can promote and really change the trajectory of learning.”