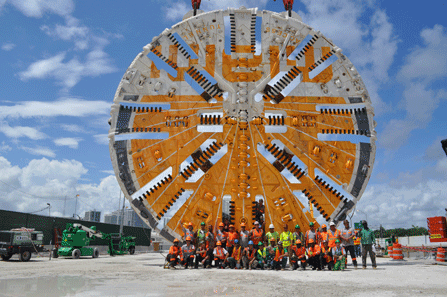 A construction crew poses with one of the massive boring units for the Port of Miami tunnel project, which is being constructed under a public-private partnership between Florida and private firms. Florida and many states are relying more frequently on such partnerships to build, operate and maintain prisons, water facilities, tunnels and even hospitals and schools. (AP)

Still strapped for cash in the aftermath of the recession, states increasingly are partnering with private companies to build and maintain highways, prisons, water facilities, tunnels and even hospitals and schools.

Since these partnerships began two decades ago, their popularity has increased to the point where today, two-thirds of the states have laws authorizing so-called “P3s,” and 24 states recently have considered legislation related to the partnerships, according to the National Conference of State Legislatures.

Under the P3 strategy, private companies typically cover the upfront costs of projects, in exchange for the right to run the facilities and to collect tolls or other payments. Privately-run toll roads have been around for a while, but now other types of P3s are drawing interest, in large part because states are running out of bonding authority and other public revenue-raising methods.

Take the $663 million Port of Miami tunnel, which is designed to funnel port traffic directly to the waterfront from an interstate highway, thereby avoiding downtown Miami's traffic lights and narrow streets. The project began in 2009 with a “design-build, finance, operation and maintenance” contract with Bouygues Civil Works Florida, which is constructing the tunnel.

Under the agreement, Florida officials paid only a portion of the construction costs upfront, pledging to pay the rest in “milestone payments” as specific parts of the tunnel were completed. Bouygues Civil Works, rather than the state, assumed the upfront financing risk, allowing Florida to avoid a potentially controversial bond issue. The state will pay Bouygues in installments, after each “milestone” in construction is reached: $20 million for completing the design, $40 million for the first bore; $25 million for the second bore; $15 million for completion of a causeway, and $350 million at the end of the project.

Once the tunnel is complete, Florida will pay another private company, Transfield Services Infrastructure, to operate the tunnel and to maintain it. The tunnel is scheduled to open in May 2014, and the agreement is to last until 2044. Once construction is complete and the operating and maintenance period for the tunnel begins, the state will make so-called “availability payments,” no more than $32.5 million a year (adjusted for inflation) to Transfield Services for operating and maintaining the tunnel.

“By doing a P3, it allowed us to deliver this project today and take advantage of the prices we're seeing today, and giving the project to the public today rather than some time far beyond today,” said Brian Blanchard of the Florida Department of Transportation. “I don't think we would have been able to set a day when this could have been done (without the P3).”

Virginia pioneered the P3 concept two decades ago with a prison that was privately designed and built. The prison, which ended up costing $42 million to construct, had to be built to state specifications, but the private company had its own design ideas that arguably were more efficient and less expensive, according to Michael Maul, associate director of the Virginia Department of Planning and Budget.  “The point they made was they could build it cheaper,” Maul said. “It was built more quickly and for less cost.”

In 1998, Virginia officials estimated that using a P3 to build and operate the prison would generate savings of between 15 percent and 20 percent.

Maul said the bottom line for states is that the P3s allow state more flexibility to do “things that they might otherwise not have had the political will or the upfront money to do.”

However, Maul cautions other states considering P3s to examine them closely.  “It's like any deal, go in with your eyes open, and if you can find a mutually acceptable deal, it's great,” he said. “Otherwise, be willing to walk away.”

Flush from the success of the P3 prison project, Virginia lawmakers six years later approved the Public-Private Education Act, which was intended to build K-12 schools. Before long, the state had expanded the law to include water systems, parking lots and hospitals. Since then, Virginia has used P3s to build a geriatric hospital in Williamsburg, dormitories and classroom space at state colleges, and many other things.

Other states, including Florida, have used Virginia's legislation as a model, according to Richard Norment, executive director of the National Council of Public-Private Partnerships. Florida expanded its P3 law this year to cover housing, water, and transportation projects, and to allow the use of P3s by other governmental entities, including counties, municipalities, school board and regional governments.

“Anything you can think of that's a public infrastructure is eligible for a public-private partnership,” Norment said.

According to Florida attorney S. Elysha Luken, who writes a blog on the subject, the new law will allow many Florida projects that have been sitting on the shelf for years to move forward.

Corey Boock, a partner in a national law firm known for negotiating P3 deals, said they ”incentivize higher quality on the front end,” because the private entity knows it is going to have to take care of the facility over the long term. If maintenance issues arise, it will be more costly to the firm and jeopardize their return on investment, he said.

Boock acknowledged that the non-traditional process is off-putting to some government officials. In addition, he said, some people “key on the fact that because investors get a return on equity, the cost of capital is higher than the traditional municipal tax-exempt market. That's generally an accurate statement. But they don't appreciate the tradeoffs in terms of transferring risk and lifecycle cost.”

The biggest skeptics of the state public-private partnerships have in many cases been public labor unions, who see jobs going away, particularly as the result of private companies owning and operating public facilities. For example, the state engineers union in California sued to try to stop the rebuilding of the road that leads to the Golden Gate Bridge to make it more earthquake resistant, but lost in the courts.

And Chicago's proposal to privatize Chicago Midway International Airport ran into trouble when all but one bidder dropped out of the process. That lack of interest was traced to a private parking meter deal the city cut for $1 billion five years ago, which resulted in skyrocketing parking-meter rates and irate citizens.

Despite those missteps, Boock argued that more P3s are inevitable as the country's infrastructure needs outstrip its ability to pay for them. He pointed to  Project Neon in Las Vegas, an interstate highway widening project,  and a 30-year, $86 million deal that Rialto, Calif., recently struck with a private firm to improve water and wastewater facilities as examples.

“The need to have private capital come in is so persuasive that we're going to see this more and more,” he said.