Statistics on commuting get a lot more interesting at the state level. 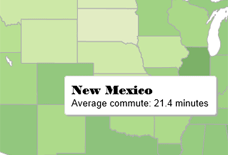 See Stateline Interactive: Commute Times and Methods by State How do you get to work each day and how long does it take?

By 2012, Marylanders logged the longest commutes, taking an average of 31.9 minutes to get to work. South Dakotans now spend less time commuting than their neighbors to the north, with the shortest average commute in the country at 16.7 minutes.