Tucson has built four-mile-long streetcar tracks that will run between the University of Arizona campus and downtown. Only two of the eight cars that will be used to ferry passengers every 10 minutes have arrived, and operations will not start until next year.

But local business leaders say the streetcar has already revived the center of this sprawling, artsy city of 524,000. Roughly 150 businesses have opened their doors along the route in the last five years, and the once-dormant area is in the middle of a $230 million construction boom, according to the Downtown Tucson Partnership. The group estimates that 2,000 jobs have been created or relocated to the area.

“The fact that Tucson could reinvent itself in the middle of the worst recession to hit the state since 1928 is astonishing,” said Michael Keith, CEO of the downtown group.

It is a common theme among city planners from Fort Lauderdale, Fla., to Seattle, as younger workers flock to areas where cars are not needed for daily living. Cities as big as Los Angeles and as small as Norfolk, Va., are turning to streetcars and light rail lines to tie together neighborhoods, attract businesses and lure residents.

“They help drive development. They help create a sense of place. They help shape your community… and bring a vitality to your community. It's a combination of all of those factors,” said Art Guzzetti, vice president for policy for the nonprofit American Public Transportation Association, which advocates for public transportation.

Two dozen cities already operate light rail and streetcars. Many are considering expansions, while dozens more are studying proposals to build their own.

In fact, light rail (including streetcars) is by far the fastest-growing mode of transit, carrying 2.5 times as many passengers as they did in 1990, according to the association.

For the first time in 2009, light rail was more popular than commuter rail, which links cities to their suburbs. Buses and heavy rail systems such as subways still dwarf both in terms of passenger trips, however. 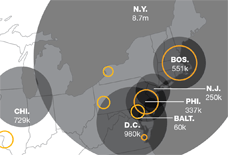 Streetcars are generally smaller than other light rail cars. They tend to run for shorter distances and make more stops than light rail. They also operate in local traffic.

The light rail that opened in Phoenix in 2008, for example, travels 20 miles to connect the city to nearby Tempe and Mesa. Tucson's streetcar, on the other hand, will travel only four miles to connect neighborhoods near the center of the city.

Streetcars certainly have detractors, especially because they are far more expensive than normal bus routes. A single streetcar carriage can cost between $3.5 million and $5 million. The Tucson project is expected to cost $196 million, which will be paid for with local taxes and federal stimulus funds.

Cincinnati voters on Tuesday (Nov. 5) elected anti-streetcar candidate John Cranley as mayor. The mayor-elect made canceling the city's $133 million plan to connect downtown with the Over-the-Rhine neighborhood a central plank in his platform. Streetcar proponents say halting construction would cost the city about $30 million and mire it in lawsuits.

“We're going to get out of the streetcar project, which is too expensive,” he told supporters after his election, according to TV station WCPO.

Cincinnati's streetcar has been a lightning rod for controversy for years. One of Ohio Republican Gov. John Kasich's first acts in office was to eliminate state funding for the project promised by his Democratic predecessor.

The project still depends on federal money, and canceling it would mean the city would have to send back the federal money it has already spent.

The price tag for the projects — and who picks up the bill — vary from city to city. The federal government can help defray costs with grants. In some areas, tax increases or assessments on businesses along the routes can help fund the improvements.

While streetcars can be more expensive than buses, they also bring greater economic benefits, said Kevin Clark, president of manufacturer United Streetcar. When a city lays down tracks for a streetcar line, he said, it is committing to providing customers to businesses and transportation to residents for decades.

In Tucson, he said, the streetcar is expected to attract more than four times as much economic investment as the project cost. The location is particularly favorable: The university and its 40,000 students are nearby; rents are cheap; and there are enough historical buildings to give it an authentic feel.

United Streetcar, based in Oregon, is building streetcars for Tucson, Portland, Ore., and Washington, D.C. When its first car rolled out of its factory this June, it became the first American company to produce streetcars since the 1950s. Clark said the company relies as much as it can on American suppliers. Three hundred companies in 32 states contribute to the vehicles.

But United Streetcar has fallen behind schedule in providing cars to Tucson and Washington (expecting two more for its five-car fleet), pushing back the date both cities can begin service. Clark said the company underestimated the difficulties of managing its complex supply chain, which led to the delays.

Even with the delays, Tucson officials are excited for the streetcar's debut, now scheduled for next July.

Shellie Ginn, the streetcar's project manager with Tucson's Department of Transportation, said the train would bridge both “mental and physical” divides between neighborhoods.

An interstate highway isolates the Mercado district, a largely empty area west of downtown targeted for development. Railroad tracks separate the Fourth Avenue shopping district and the University of Arizona campus from the heart of downtown.

“The streetcars have been able to obliterate those barriers by providing that direct connectivity between all of these areas,” she said. The university is building student housing closer to downtown along the streetcar line. The train will also connect medical facilities on opposite sides of the route.

In the meantime, restaurants and boutique shops are now opening where tattoo parlors and abandoned storefronts once stood.

“You're starting to see that diversity, that density that pulls people in,” Ginn said. “And with all of these (college) kids living here, it brings a lot of liveliness to the downtown that it frankly hasn't seen in a long time.”