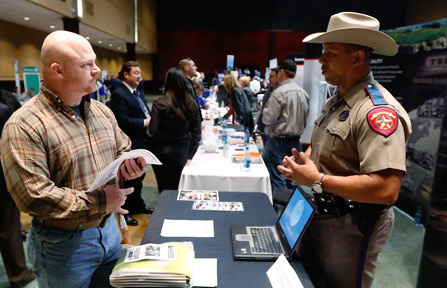 The overall unemployment rate for veterans is steadily declining, but veterans are having better luck landing work in Virginia and Texas than they are in California and New Jersey. The jobless rate for the youngest veterans remains stubbornly high.

Amid a national campaign to hire veterans – championed by the White House, governors, private businesses and celebrities such as actor Gary Sinise –the overall unemployment rate for veterans stands at 6.5 percent, compared to a rate of 7.2 percent for the country as a whole.

However, the jobless rate for the youngest veterans —those between 18 and 24—was 19.5 percent in the third quarter of 2013. That's down from 30 percent in 2011, according to Bureau of Labor Statistics (BLS), but still higher than the rate for any other age group.

Experts stress that only 214,000 of the nation's 21 million veterans of all ages are in that youngest age bracket. And of that number, 57,000 young veterans say they aren't actively looking for work. Given the 19.5 percent unemployment rate, that means 31,000 young vets actively sought jobs but couldn't find them in the third quarter. 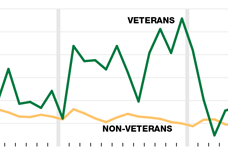 See Stateline Infographic: Young Veterans Have the Hardest Time Finding Work. In 2012, the unemployment rate for Gulf War-era II veterans age 18 to 24 was 20.4 percent, higher than the rate for nonveterans of the same age group (15 percent).

The government's quarterly and yearly surveys are the most accurate snapshots of the job picture for veterans because troop deployments and draw-downs can cause wild swings in the monthly figures. Plus, monthly surveys typically involve a small number of veterans, only 9,000-10,000.

BLS doesn't publish state-by-state data because the sample size is too small in some states other than these.

California, Texas and Florida each have more than 1 million veterans, but their numbers have been declining. For example, between 2000 and 2012, the number of veterans living in California decreased by nearly 30 percent, according to the U.S. Department of Veterans Affairs. Nationwide, the total veteran population decreased 16.5 percent during that period, with the deaths of older veterans who served in World War I, World War II and Korea. (See 50-state map).

Even with the deaths of older veterans, Virginia's veteran population increased 7 percent between 2000 and 2012, to 837,000. One reason the unemployment rate among them is so low is because the state has numerous military facilities—including the Pentagon, Langley Air Force Base, Marine Corps Base Quantico, and the Naval Station at Norfolk—where veterans can segue from being active duty to civilian employees.

But the state also is making a big push to hire veterans.  Republican Gov. Robert McDonnell has vowed to make Virginia the “most veteran- and military-friendly state in America.” The state has ramped up efforts to reach out to employers who may not be familiar with the military to consider hiring veterans. Only about one half of 1 percent of the U.S. population has been on active military duty at any given time during the past decade.

“Many people don't realize how hard these soldiers, sailors and Marines are screened even before they put the uniform on,” said Paul E. Galanti, commissioner of Virginia's Department of Veterans Services. Only 20 percent of today's youth is qualified to get into the armed services, he said.

“Uncle Sam is doing the heavy lifting by screening your employees,” said Galanti, a former fighter jet pilot during Vietnam who was a prisoner of war for nearly seven years. He has been promoting the state's “Virginia Values Veterans” program, which teams employers with veterans. The program  provided jobs to 3,000 veterans in the first year and employers have promised to hire another 1,800.

McDonnell's Democratic counterpart in neighboring Maryland, Gov. Martin O'Malley, has set a goal to have all veterans in his state employed by the end of 2015.

Last spring, O'Malley signed legislation that aims to make it easier for veterans to use their military skills to get civilian jobs. Among other things, the law allows military training and experience to be used toward licensing requirements for more than 70 state licenses and certifications, and requires public universities to award academic credit for military experience.

James R. Reed of the National Conference of State Legislatures said  34 states have acted in recent years to allow military training, education and experience to count toward occupational licenses.  (Click here for a map showing status of state legislation from the White House.) As Stateline has reported, more than a dozen states have taken action to make it easier for veterans to translate military skills and experience into college credit.

Among the other programs states offer veterans:

Tax Credits: Illinois employers can get a tax credit of up to a $5,000 a year for hiring veterans, while Alabama and New Mexico offer employers $1,000 tax credits. Idaho's Hire One Vet program  gives a sliding-scale income tax credit to employers who pay $12 to $15 an hour or more plus benefits. Missouri  reimburses 50 percent of wages while the veteran is being trained.