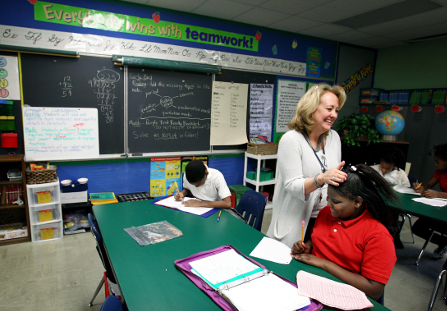 Fourth-grade teacher Angela Gaia pats a student on the head during math class in a Memphis elementary school. Only Tennessee and the District of Columbia showed improvement in both reading and math scores for both fourth- and eighth-graders on the Nation's Report Card. (AP Photo/The Commercial Appeal, Mike Brown)

Reading and math scores remained flat or squeaked up by less than a percentage point from 2011 to 2013 on the National Assessment of Educational Progress, commonly known as The Nation's Report Card.

Students in Tennessee and the District of Columbia were the only ones who improved reading and math scores for both grade levels compared to 2011. In both places, the largest gain was in fourth-grade math scores, which improved by seven points. California experienced a notable rise in its eighth-grade reading score, up seven points.

In five states—Massachusetts, Montana, North Dakota, Oklahoma and South Dakota—scores dropped between 2011 and 2013 in at least one grade level or subject area.

NAEP is given to fourth- and eighth-graders every two years and is widely considered the best measure of academic progress over time and from state to state. Although scores have risen since NAEP was first administered in the early 1990s, progress has slowed in recent years. Math scores have climbed more than reading scores since the NAEP tests were first given.

Jack Buckley, commissioner of the National Center for Education Statistics, which administers NAEP, said that while the gains between tests tend to be small, “we're happy to see incremental progress.”

The NAEP also measures the so-called “achievement gap” between white students and black or Hispanic students. The gap remained largely unchanged between 2011 and 2013:

Paul Peterson, who directs the Program on Education Policy and Governance at Harvard's Kennedy School of Government, said the data show the country is making less progress now than it did in the previous decade.

“We're now moving forward by inches,” said Peterson. “We've abandoned the accountability system that was put in place in No Child Left Behind,” the 2001 law intended to improve achievement and hold schools accountable for student performance.

“Instead of abandoning accountability, we need to improve it, revise it, enhance it,” Peterson said.