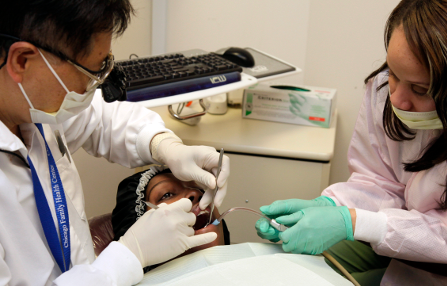 Dr. Francis Tham and dental assistant Latasha Johnson attend to Medicaid patient Pamela Scott at the Chicago Family Health Center. Illinois and 24 other states have opted to expand Medicaid to low-income adults under the Affordable Care Act. Enrollment for the expansion has been skyrocketing. (AP)

States are reporting far higher enrollment in Medicaid than in private insurance since the Affordable Care Act exchanges opened Oct. 1. In Maryland, for example, the number of newly eligible Medicaid enrollees is more than 25 times the number of people signed up for private coverage.

Even some Medicaid experts say they are surprised at the early numbers.

A Stateline survey of the 25 expansion states and the District of Columbia provides clear explanations for the strong Medicaid rollout so far.

The biggest reason for the initial jump in Medicaid enrollment is that hundreds of thousands of people in the expansion states have been pre-qualified for expanded Medicaid because they are already enrolled in low-income state health care. Illinois, for example, will roll over 100,000 Cook County residents who have received expanded Medicaid benefits since 2011.

Another reason for the big numbers is aggressive outreach campaigns in many states, including mailings to residents enrolled in other safety net programs. Oregon, for example, signed up 70,000 enrollees in October by contacting residents who receive food stamps.

A much smaller number of people in expansion states are also signing up on state exchanges and Medicaid websites. The federal government has not yet released the number of Medicaid applications filed on federally-operated exchange sites in the 34 states that are not running their own exchanges.

To be sure, the rush to enroll in Medicaid indicates a strong demand for health care coverage.  But the early spike is more a function of states' proven ability to find, educate and enroll low-income residents than an indication of an imbalance with healthier people who can afford insurance, as has been suggested.

It is important to note that early enrollment numbers reflect so-called “low hanging fruit,” said Matt Salo, director of the National Association of Medicaid Directors. Future increases are expected to be smaller.

The states that chose to expand Medicaid, Salo said, are predisposed to aggressively reach out to potential beneficiaries. “Most have been more committed to Medicaid than the other states,” he said.

After the U.S. Supreme Court ruled last year that Medicaid expansion was up to states, the Congressional Budget Office downgraded its original projection that 13 million people would qualify for expanded Medicaid in 2014 and 17 million by 2020.  Now, the federal estimate is 7 million by the end of 2014 and 11 million by 2020.

Stateline's survey indicates at least 1.5 million people have already signed up or have been pre-qualified for expanded Medicaid in the 19 states that provided counts. Expected total enrollment in those states is 3.7 million.

Following are the details available as of Nov. 5:

Arizona: The number of new applications is not available at this time. In total, Arizona expects 57,000 people to qualify for its expanded Medicaid program. In addition, the state expects 240,000 more individuals to enroll in its existing Medicaid program for childless adults with incomes at or below the federal poverty level ($11,490).  Enrollment in that program was frozen in 2012 and currently totals 70,000.

Arkansas: Arkansas has received 70,595 applications for its expanded Medicaid program. Of those, 3,672 came through the state's existing Medicaid website, 1,785 were paper or phone applications, and the rest were positive responses to a mailing to 132,000 households that receive food stamps. Ultimately, the state expects about 250,000 uninsured residents to qualify.

California:  California plans to release enrollment numbers from its state-run website in mid-November. Newly eligible enrollment in expanded Medicaid is expected to total about 1.4 million. Of that number, 600,000 people will come from the state's early expansion program approved by the federal government in 2011.

District of Columbia: D.C. began expanding its Medicaid program in June 2010. By June 2013, nearly 50,000 new people were enrolled. The District has not estimated how many people will ultimately enroll in expanded Medicaid.

Hawaii: Hawaii has approved 6,100 applications for expanded Medicaid. By 2014, the state expects a total of 54,000 enrollees.

Illinois: The Illinois Medicaid agency has received 30,124 applications for expanded Medicaid through its existing website. Illinois has an exchange partnership with the federal government so applications are also being filed on the federally-run exchange. In addition to online applications, 46,000 people responded to an August mailing to 123,000 food stamp recipients. Illinois has enrolled 26,000 of those respondents and is processing the balance. In addition, 100,000 people in Cook County who participate in a limited early Medicaid expansion enrollment group will automatically be rolled over to the expansion program on Jan. 1. Projected enrollment is 342,000.

Iowa: No new numbers are available on Medicaid applications. In all, 150,000 uninsured Iowans are expected to qualify under the proposed expansion. About 63,000 residents with incomes up to 200 percent of the federal poverty level ($22,980) are currently enrolled in a Medicaid health plan with limited benefits. Most are expected to qualify for expanded Medicaid. Iowa has not yet received federal approval for its Medicaid expansion plan, which is similar to Arkansas' so-called private option.

Kentucky: Kentucky has received 25,654 applications for expanded Medicaid through its state-run exchange. Ultimately, the state expects 308,000 low-income individuals to qualify.

Maryland: The number of applications from its state-run website is not yet available. However, Maryland has an existing, limited-benefit health plan known as Primary Adult Care (PAC) available to all adults with incomes up to 123 percent of the federal poverty level ($14,133).  As of Sept. 30, enrollment in the plan was 82,423. Maryland expects enrollment in PAC to expand to 88,000 by Jan. 1, 2014, when the entire population will automatically convert to full Medicaid benefits. In addition, residents in a narrow income band (124 percent to 138 percent of poverty) can sign up for expanded Medicaid on the state exchange. Overall, Maryland expects 110,000 people to be enrolled by the end of 2014.

Massachusetts: No enrollment numbers are available at this time. As a result of its own health care reforms launched in 2006, Massachusetts has a 97 percent insured rate. Still, the state expects about 45,000 people to obtain Medicaid coverage as a result of the expansion.

Minnesota: The federal government granted Minnesota special permission to enroll 84,000 individuals in the expanded Medicaid program in 2011. Another 2,496 newly eligible Medicaid beneficiaries completed applications on the state-run exchange in the first two weeks of October. Ultimately, Minnesota expects to cover 265,000 adults in its expansion. In addition, it is the only state that has opted to provide a so-called “Basic Health Plan” for people with incomes up to 200 percent of the federal poverty line ($22,980).  Under the ACA, the federal government will pay 85 percent of the costs starting in 2015. That program is expected to grow to 160,000.

Nevada: No information is available at this time.

New Jersey: No information is available at this time.

Ohio: The most recent state to expand Medicaid, Ohio expects to sign up 275,000 newly eligible Medicaid enrollees. Republican Gov. John Kasich sidestepped the state legislature and won approval for expansion Oct. 21 from a legislative Controlling Board. The state has not yet begun enrollment. The Medicaid agency says it will announce soon when enrollment will begin.

Oregon: Oregon has approved 70,000 applications for expanded Medicaid. Its state-run website had some initial technical difficulties, but new applications were filed over the phone, in person and through the mail. The vast majority of enrollments came from a mailing in late September that went to 260,000 residents who either receive food stamps or have children enrolled in Medicaid. The state expects roughly 223,000 adults to be enrolled in its expanded Medicaid program by 2015.

Rhode Island: Rhode Island has approved 3,213 new applications for its expanded Medicaid program. Another 835 are in progress. Projected enrollment is 23,428.

Vermont: About 1,000 individuals have signed up for Medicaid on Vermont's exchange or by submitting paper applications. In addition, 30,000 adults enrolled in two state-run low-income health plans will be rolled into the expanded Medicaid program. By 2015, Vermont expects enrollment to reach 160,000.

Washington: Through its state-run exchange and Medicaid sites, Washington has signed up 26,336 people. Another 30,000 people enrolled in a low-income health program will be automatically enrolled in expanded Medicaid, bringing the total to 56,336. The state expects 270,000 people to qualify by the end of 2014.