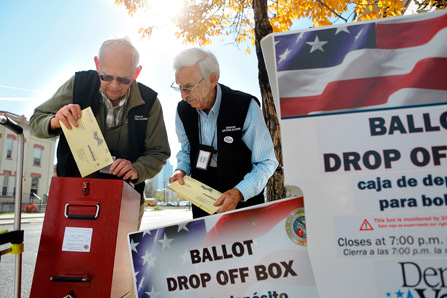 Election judges William Moeller, left, and Harry Sabin transfer ballots from an early-voting drop box outside of a library in Denver. Colorado is one of many states with issues before voters Tuesday. (Getty)

In six states on Tuesday, voters considered 31 ballot questions that saw fierce campaigns and demanded voter attention, and in at least one case, broke spending records.

In New Jersey, voters approved raising the minimum wage to $8.25 an hour and linking future increases to inflation, a practice already in place in 10 other states. New York voters, meanwhile, approved a large expansion in gambling in their state, giving their approval for as many as seven new casinos that supporters said would benefit upstate economies and local governments.

Splitting on a pair of tax questions, Colorado voters approved a 25 percent tax on marijuana sales, with much of the revenue earmarked for education or public safety spending, fulfilling a promise that dominated the campaign in favor of recreational marijuana that was decided in 2012.

But the failed vote on education funding, which would have raised nearly $1 billion for schools, was a blow to Democrats looking to replace the state's flat income levy in historically tax-averse Colorado. The effort had drawn support from education reform advocates such as Bill and Melinda Gates and New York City Mayor Michael Bloomberg.

Hard-fought contests for legislative seats in a few states were also decided, as well as several congressional races to fill vacancies and judicial elections in New York.

The most expensive ballot-question effort waged was in Washington over a measure that would have made the state the first to require genetically modified food (known as GMOs) to be labeled as such. The effort drew millions in campaign funds from food activists and agri-business interests nationwide. Campaign spending topped $40 million, making it the most expensive ballot-question campaign in state history, outspending earlier fights over gay marriage and the state's liquor business.

While supporters of the measure were optimistic heading into Tuesday's vote, the results ended up being the second blow to efforts to label GMO foods. California voters rejected a similar measure in 2012.

Voters in Virginia delivered the governor's mansion to Democrat Terry McAullife. And while there was relatively less drama for Virginia legislative elections, the results could have implications for party control in Richmond, especially with Democrats re-taking the lieutenant governor from the Republicans. The parties are split evenly in the Senate, and the outgoing lieutenant governor – Republican Bill Bolling – serves as tiebreaker when necessary. Three state senators were running for higher office, including Lt. Gov.-elect Ralph Northam, and their fortunes could create domino effects.

Republican Gov. Chris Christie cruised to re-election New Jersey. But Democrats retained their control of majorities in Trenton, despite Christie's landslide victory at the top of the ticket.

Here are some of the highest-profile ballot questions and results from Tuesday.

Two revenue measures could have amounted to the largest tax hike in state history.

A proposed constitutional amendment would allow up to seven new casinos to be built in the state, something that Gov. Andrew Cuomo and business interests have backed as a way to boost revenues and drive economic activity in upstate New York. The amendment doesn't specify whether the state will tax privately run casinos or open its own. APPROVED