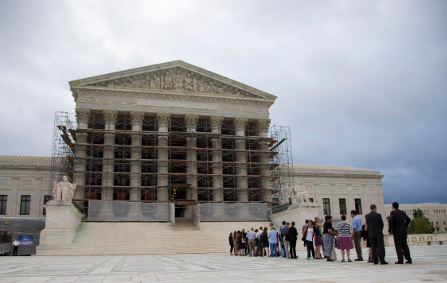 People wait in line for the beginning of the Supreme Court term last month. The justices will consider a government-sanctioned prayer case Wednesday. (AP)

The Supreme Court will consider the limits of government-sanctioned prayer on Wednesday, as the justices wade into an area of American history and law that one expert called “a mess.”

The case – Town of Greece v. Galloway – began as a challenge against the practices of Greece, N.Y., a small town outside Rochester, where official city government meetings included a prayer. For a time, that prayer was exclusively Christian, a specific practice that the town's opponents said violated the constitutional ban on government-sanctioned prayer. A lower federal court agreed.

But in reaching the Supreme Court, the case has since turned into a potential opening for a broader ruling on government-backed prayer.

While government meetings and practices of all kinds – including sessions in state legislatures, the U.S. Congress and indeed the Supreme Court itself – often include prayers or invocations of God of some kind, the limits for what could and could not pass constitutional muster have been vague for years.

“It's one of those things that there are endless variations of what can happen on the ground,” said Jessie Hill, a law professor at Case Western Reserve University, who wrote a preview of the court's arguments on the influential website SCOTUSblog. “The court has really struggled with what to do with government speech that is religious in nature.”

“Anyone will tell you that the law in this area is just a mess,” she added.

The U.S. Constitution bans the establishment of an official state religion. Yet over the years, some kinds of religious speech and symbolism have been allowed to permeate certain practices – from the use of “God” in the Pledge of Allegiance and U.S. currency to opening prayers before government meetings.

There are limits – but the problem is in defining what those are.

In most cases, lower courts have found the Supreme Court's 1983 ruling in Marsh v. Chambers to generally allow prayer before government hearings. In that ruling, the court cited the historical prayer practice of legislative bodies as trumping the Constitution's ban on government-sanctioned religion, allowing the practice to continue.

But there was no test or limit laid out, and since then, countless government bodies have used the ruling to employ nondenominational, multi-faith and even sectarian prayers, mostly without running afoul of the courts. Courts have found some practices overly sectarian or said they aligned a government too closely with one religion, but the limits were never clearly defined.

Over the years, courts also adopted the “endorsement test” to limit government prayer, a stronger approach which critics often called too restrictive. The test says government-sanctioned prayer violates the Constitution when it signals official sanction or disapproval of certain faiths, or even makes those not of a given faith feel like outsiders.

It was the endorsement test that the 2nd Circuit Federal Court cited in ruling against the New York town in the case now before the justices, rather than a narrow ruling citing the Marsh precedent.

That means that, in a sense, the test itself is at issue before the court. And in choosing to review that ruling, the Supreme Court has given an opening to those who have argued for a more permissive approach, one that would allow prayer as long as it's not “coercive” or proselytizing, for example, rather than sectarian. That's the argument adopted by the Obama administration, which weighed in with a brief of its own in the case.

Thanks to the lower court's use of the endorsement test, the Supreme Court justices now have an opportunity to revisit – and potentially end – the endorsement test's limit on prayer once and for all. While it might seem like a slight change in the legal landscape, Hill said such a ruling would be a “bombshell.”

“A lot of folks have thought for a long time there are five votes to replace that,” she said, referring to the conservative justices on the court. “People have expecting that for seven years since [Justice Sandra Day] O'Connor left the court.”

Whether the court will go that far is unclear. There are many other options, Hill and others say, including some that would rule against the town and still save the endorsement test. The justices could order the lower court to take another look at the case under the Marsh precedent, for example.

The facts of the case also leave some room for a narrow ruling. The fact that the town featured exclusively Christian prayer could bolster the argument that the town went too far, even by more permissive standards, and therefore isn't a case that should involve the broader issue of government prayer.

Others have said because it's a municipal government – where citizens could be required to appear for permitting or other issues, unlike a legislative floor session – the case is a special test of prayer allowance.

The fact that the U.S. Supreme Court took the case at all has left some to predict an interest among some justices for a more sweeping ruling, one that would clear up ambiguities in the law and, potentially, open the door for more prayer in government.

But how far to open that door could be a difficult question.

“This case is just another example of the difficulty we get into when the court starts sanctioning government religious speech,” Hill said. “[This case is] clearly that problem coming home to roost.”