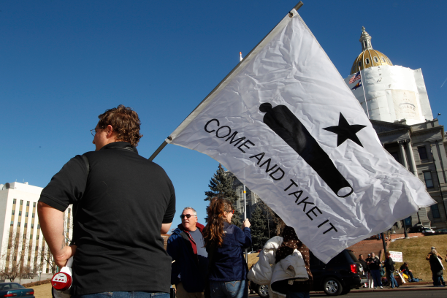 A protester holds a flag during a pro-gun rally at the Colorado State Capitol in Denver. Angered by gun control measures and other actions taken by the Democrat-dominated legislature, 11 northern Colorado counties are voting Tuesday on whether to secede from the state. (AP)

No matter the outcome of Tuesday's secession vote, the 11 northern Colorado counties that want to form their own state may have already scored a measure of success, thanks to what might be called the “squeaky wheel” principle of politics.

Many initially viewed the secession drive, sparked by rural conservatives' anger over the actions of liberal lawmakers in Denver, as a novelty. But it has gained a measure of legitimacy for one simple reason: Colorado's leaders are taking it seriously.

Democratic Gov. John Hickenlooper recently traveled to the restive region to promise residents that Denver would listen more carefully to their concerns. U.S. Rep. Cory Gardner, a Republican who represents most of the area, has pointedly declined to disavow the secession effort. And no matter how unlikely it is to result in a 51st state, those backing it have attracted national attention.

“It's like if you have five kids, and one of them starts crying, you're going to run over and see what's wrong,” said Michael Trinklein, who wrote a book on state secession history. “That's exactly what they want, and it sounds like they're getting it.”

The Colorado secessionists cite a laundry list of liberal actions for their desire to break away. The Democrat-dominated legislature has legalized civil unions for same-sex couples, for example, circumventing a voter-approved constitutional ban on gay marriage. It also has tightened gun laws, loosened voting restrictions, and legalized marijuana.

"It really started with the last legislative session being the straw that broke the camel's back between the rural and urban divide," Jeffrey Hare, who's leading the so-called 51st State Initiative, told ABCNews.com. "It stems back to years and years of neglect and, in some cases, outright hostility towards the rural parts of the state."

Under the U.S. Constitution, a section of a state may secede with the approval of the state legislature and Congress. If the secessionists in Colorado triumph in Tuesday's vote, their next step will be to petition the Colorado legislature.

No state or portion of a state has successfully seceded since pro-Union western Virginia split from the rest of the state when it joined the Confederacy in 1861, forming the new state of West Virginia. But in numerous instances, the secession option has been on the table.

During the 1930s, there were serious discussions about separating Northern California and Southern California, but World War II quashed the idea. The eastern parts of Washington and Oregon have long flirted with splitting off from the liberal coastal areas of those states to combine with Idaho. And as recently as the 1970s, there were serious efforts to divide New York City from the rest of the state of New York.

“These things have been going on since we first had states,” Trinklein said.

The secession option has attracted more attention in recent years, as more states have become dominated by a single party. The idea is bandied about most often in states where a liberal urban core is out of step with more conservative rural areas.

Rather than viewing such efforts as quixotic or impractical, Trinklein sees value in them.

“It's a beautiful thing that when people are disaffected they have this mechanism, and it usually gets them what they want, and we're not fighting wars,” he said.

Americans tend to view the current alignment of 50 states as static, but Trinklein notes that President Barack Obama is the first U.S. president who hasn't seen a state added to the Union in his lifetime.

Secession remains a long shot, but those voicing complaints do tend to get at least a portion of what they're looking for.

“What typically happens is you raise enough of a stink and then there is some compromise generally,” Trinklein said. “That's the beauty of the American system of government.”