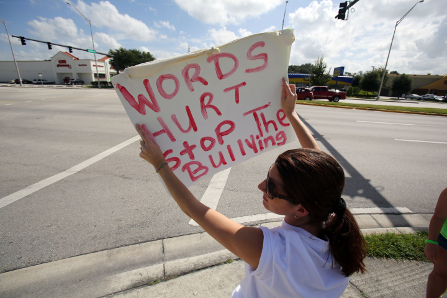 Aimee Galassi holds a sign during a carwash fundraiser for 12-year-old Rebecca Ann Sedwick in Lakeland, Fla. Sedwick, who had been bullied online and at school, committed suicide in September. (AP)

Once considered a teenage rite of passage, bullying is now the subject of hundreds of state laws and a rallying cry for pundits, parents and celebrities.

The stakes are high — many teens who commit suicide experienced at least some bullying. Bullying by itself does not cause suicide, according to a research review conducted by the Centers for Disease Control and Prevention. But researchers found that youth who are bullied are more likely to be depressed, think about suicide and actually attempt suicide.

Coming up with a workable plan to stop bullying has proven difficult. The approaches are all over the map. For instance, Illinois requires schools to do social-emotional learning exercises to prevent bullying. During the exercises, students describe their emotions during a stressful event or recognize the emotional reactions to stress.

On the punishment side, five states don't have any sanctions for bullying in their anti-bullying laws, while 12 states include a criminal sanction for bullies, ranging from school suspension to jail time, according to an analysis of state bullying laws from the Cyberbullying Research Center.

Montana is the only state with no law to address bullying.

Sedwick received text messages and online messages from the two teens telling her to kill herself and that she should “drink bleach and die.” Sedwick was also physically attacked by the two girls, according to the sheriff's department.

“Bullying shouldn't be a law enforcement issue… but when it becomes a crime, we have to become involved,” Judd said in an interview with WBUR's “Here and Now” radio show. Sedwick had been hospitalized after a suicide attempt in 2012 and also changed schools, but the bullying continued online.

Using the criminal justice system to stop bullying should be the last resort, but it isn't unprecedented, said Justin Patchin, co-director of the Cyberbullying Research Center and professor of criminal justice at University of Wisconsin-Eau Claire.

After two other high profile teen suicides in 2010—Tyler Clementi , a Rutgers University freshman and Phoebe Prince, a high school sophomore from South Hadley, Mass.—criminal  charges were brought against students who bullied them. Clementi's bully, Dharun Ravi, served 20 days in jail for using a webcam to spy on Clementi having sex with another male student and sharing the video with friends. The judge ruled it a hate crime.

Five students received probation for bullying Prince, both online and in person. Both Clementi and Prince were struggling with mental health issues separate from being bullied.

Typically, bullying is handled at the school level, either by working with the victim to move them away from the bully or getting the bully into school counseling. All 49 state bullying laws require schools to set up a school policy to stop bullying.

The state laws have set the floor, but haven't gone beyond that, said Nancy Willard, who has worked with states to develop anti-bullying programs and directs the advocacy group Embrace Civility in the Digital Age. “The laws are a necessary foundation because they say we will do something,” said Willard, “but just ‘doing something' isn't sufficient.”

Reported rates of bullying have remained stable since the first anti-bullying laws took effect in 2005. Each year since then, about 28 percent of students, ages 12-18, reported some kind of bullying, according to the National Crime Victimization Survey conducted by the U.S. Department of Justice.

Persistent bullying affects a relatively small number of students. Of the more than 24 million students who participated in the survey in 2011 (the most recent year available), just over 625,000 students reported being bullied once or twice per week. The vast majority of students who said they'd been bullied said it had only happened once or twice during the school year, which does not fit the general definition of bullying—hurtful acts that are persistent and frequent.

Online bullying was reported less frequently than in-person bullying, but the rates have increased since 2007, from 3.7 percent to 9 percent of students reporting some kind of online bullying.

Only 18 states include cyberbullying in their anti-bullying legislation. While it makes up a small portion of the overall incidents of bullying, it's the place where adults have the least influence, although schools do have the legal right to intervene in cases where online bullying threatens a student's civil right to an education.

As pervasive as these laws are, it's unclear what effect they've had beyond simply raising awareness. In some cases, said Patchin, lawmakers are simply passing legislation for the sake of showing their communities that they're concerned about bullying.

“None of the state laws offer the resources to implement effective bullying prevention programs,” said Patchin. “Making a statement (that bullying in unacceptable) is good, but the schools need money to make the programs work.”

What Works To Prevent Bullying

To really stop bullying, schools need to focus on changing their school climate, i.e. the social norms and values of the school, so that bullying is no longer acceptable to staff or to students, said Willard. That means getting the kids involved.

One option is setting up focus groups of students who can come up with recommendations for what administrators, teachers and other students can do to change the climate of the school so it no longer tolerates bullying.

The focus groups are having an effect in the Anoka-Hennepin school district near Minneapolis, which, as the result of a lawsuit settlement, is operating under a five-year consent decree between the U.S. Department of Justice and the Department of Education to change its school climate.

The district had a policy requiring staff to remain neutral when discussions of sexual orientation came up in the classroom, which the students argued this was essentially a gag order preventing teachers from stopping anti-gay bullying.

Now, under direction from the federal agencies, teachers and administrators are being trained to stop bullying and get feedback from students on how well they're doing. The climate's definitely changed, said Ann Lindsey, a teacher at Jackson Middle School who initially reported the discrimination facing gay students in the district.

"I'm thrilled to say students can walk through the halls and feel safe,” Lindsey said in an interview with the Pioneer Press in St. Paul. “The mood is much brighter; the (gay) slurs have decreased."