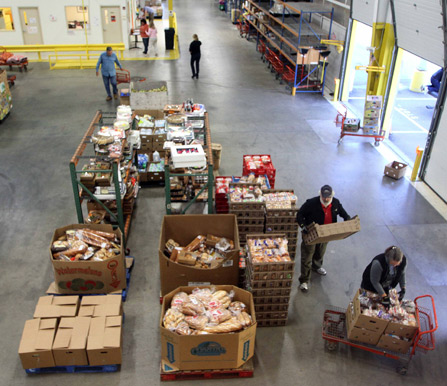 Volunteers gather food at the New Hampshire Food Bank in Manchester, N.H. to be delivered to the needy in preparation of the Nov. 1 benefit cut. (AP)

The record number of Americans relying on federal aid to put food on the table will have to make do with less starting today, as a recession-era boost to food stamps officially expires.

Benefits are being reduced by about 5 percent beginning Nov. 1 for all of the nearly 47.7 million Americans on the Supplemental Nutrition Assistance Program. A family of four will receive $36 less each month because of the reduction, according to the U.S. Department of Agriculture. A household of eight would see benefits reduced $65 a month. The average monthly benefit per household for all 50 states and the District of Columbia last year was $278. 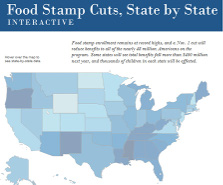 The cuts severely curtail the federal funds that have flowed into local communities and businesses through the states. Georgia, for example, will see total benefits cut by $210 million, according to an analysis by the Center on Budget and Policy Priorities, a left-leaning think tank. Illinois' share of the cut will be $220 million. For Ohio, it's $193 million. All told, $5 billion less in food stamp benefits will be paid over the next year.

The reductions will be acutely felt in states with a higher food stamp population, particularly in the dozen states where one in five residents is collecting benefits.

Vulnerable populations will be especially affected. In New York, more than 1 million elderly people or those with disabilities will feel the impact, according to the center's analysis. About 2.3 million children in both California and Texas will be affected.

(For state-by-state data on the distribution of the cuts and how many people are affected in each state, see Stateline's interactive.)

The expiring benefits were always intended to be temporary, and some say calling the end of the benefits boost a “cut” is disingenuous. Congress approved a higher level of food stamp benefits for all recipients as part of the American Reinvestment and Recovery Act, the stimulus bill enacted in 2009.

“It's a boost that was only meant to be temporary,” said Rachel Sheffield of the conservative Heritage Foundation. “They're not cutting the program.”

But despite an improved economy, demand for assistance remains at record levels — almost three times what it was in 2000. The cost of the program has ballooned as well. A decade ago, federal spending on food stamps topped $20 billion annually. In the last fiscal year, the U.S. spent a record $78.4 billion. In Washington and in many states, Republicans have backed efforts to curb spending, cut benefits and trim enrollment in SNAP.

The persistent demand and skyrocketing costs have prompted calls from some policymakers to cut spending on the program. Others say reductions are premature and will hurt those still reeling from the recession.

“We know that it's going to increase the people that come to us,” said Page Crosland of the Capital Area Food Bank, which serves Washington, D.C. — where nearly one in four are on food stamps — along with parts of Virginia and Maryland. “We're working around the clock to meet this anticipated increased demand.”

The issue is one of the central disputes in the congressional debate over the farm bill, which ramped up again this week. House Republicans have proposed nearly $40 billion in cuts to SNAP over the next decade. The Congressional Budget Office has said such a cut could end benefits for nearly 4 million people next year alone. Senate Democrats have backed a $4 billion cut.

That larger dispute has contributed to a relative quiet over the reductions taking effect today. While Democrats and the White House blasted Republicans when they backed deep food stamp cuts in their farm bill proposal, there was no significant effort to stem the reductions now taking place.

Republicans and Democrats will continue to debate their respective farm bill measures, along with broader tax and spending disputes under the plan that ended the government shutdown last month.