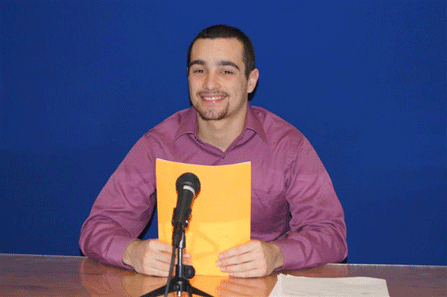 As a high school senior, Skyler Lopez, 18, wasn't sure he was college material. He changed his mind after a campaign to encourage low-income and would-be first-generation college students to apply for college reached his hometown. (Priscilla Sweitz)

As a senior at Taft High School in Lincoln City, Oregon, last year, Skyler Lopez didn't spend much time thinking about his future.

Skyler's identical twin Tyler had been aiming for Western Oregon University since the eighth grade—a daunting goal, since nobody in the Lopez family had ever graduated from college. But Skyler struggled in high school and had to scramble to even graduate. For him, college seemed like a stretch.

When a campaign to encourage low-income and would-be first-generation college students to apply for college reached Lincoln City, a small tourist town on the coast of Oregon, Skyler's school counselors urged him to apply.

He first applied to the local community college. But over the summer, he decided on a whim—again, with the encouragement of his counselors—to apply to Western Oregon University, the four-year college where Tyler would be starting school in the fall.

Today, Skyler, 18, has joined his brother as a freshman at Western Oregon, and hopes to become a high school counselor so that one day he can inspire students the way he was inspired.

Without the school counselor, “I wouldn't be where I am now,” Skyler said. “That's why I want to do that.”

Last year, close to 130,000 students in 24 states and the District of Columbia submitted more than 195,000 college applications as part of the American College Application Campaign, the effort that reached Skyler.

The initiative encourages students whose parents are low-income or who didn't go to college to apply to at least one college or university. Started in 2005, it is funded by philanthropic foundations and coordinated by the American Council on Education, which represents the presidents of U.S. colleges and universities.

High schools can customize their college application weeks to meet students' needs, but all of them schedule time during school hours for seniors to submit applications, often aided by volunteers trained to answer questions.

Schools try to drum up publicity and enthusiasm by holding raffles for students who submit applications, handing out “I applied” stickers and urging teachers to decorate their doors with photos and pennants showing their own alma maters. The Oregon University System created a YouTube video featuring people's responses when they asked them to explain—in five words or less—why students should apply to college.

“It's all about creating a college-going culture in our communities,” said Kate Derrick, a spokeswoman for the Tennessee Higher Education Commission, which coordinates the college application weeks in that state. “For us, it means for our students, it's not a matter of if they'll go to college, but where and recognizing that here in Tennessee, the jobs of the future will require college degrees.”

The American College Application Campaign began at a single high school in Siler City, N.C., and has since spread across the country. This year, about 2,000 schools in 39 states and the District of Columbia are participating.

National College Application Week is Nov. 11-15 this year, but many schools hold their events earlier so students can take advantage of early action and scholarship deadlines.

Many states have jumped in to help. In some, state employees coordinate the application drives, and some governors have signed proclamations to promote college application weeks. 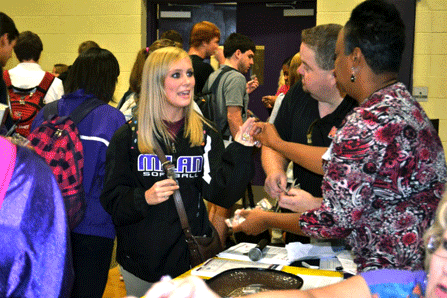 A student from Milan High School in Tennessee receives a free USB drive loaded with information about going to college, part of the Gibson County “No Excuses Tour” during the school's College App Week. (Crystal Burns)

The Burden of Being First

Bobby Kanoy, who directs the expansion of the campaign to new states, said that research shows the nation's economy needs more college graduates. The percentage of 25- to 29-year-olds with at least a bachelor's degree grew from 23 percent in 1990 to 33 percent in 2012, according to the U.S. Department of Education. Even so, the U.S. isn't producing enough graduates with the skills to thrive in the country's evolving economy.

“Unless we increase the number of students coming through the pipeline, we're going to come up short,” of workers who are educated enough for the jobs of the future, Kanoy said. “If we come up short of people who can do these jobs… we either have to send the jobs offshore, or we have to import the talent.”

Matt Rubinoff, executive director of I'm First, an initiative of the Center for Student Opportunity, a nonprofit aimed at supporting first-generation college students, said that while low-income students in middle school aspire to go to college at the same rate as their higher-income peers, they don't matriculate at nearly the same rate.

Research indicates that a parent's education is the greatest predictor of how well a student does in school and the level of education he or she achieves. Once enrolled, first-generation college students are four times more likely to drop out than peers whose parents have college degrees, Rubinoff said.

“Because of a lack of familial support and support in schools and in their communities, low-income first-generation students generally lack good information and support to navigate the college application process and the colleges that are most committed to their success,” Rubinoff said.

While the college application is only one step among many for low-income and first-generation college students, experts say it is a critical hurdle.

“Studies show that if students do apply, they have a high likelihood of enrolling,” said Margaret Cahalan, acting director of the Pell Institute for the Study of Opportunity in Higher Education.

The barriers for first-generation college students may be big or small, real or perceived.

Several high school counselors involved with the American College Application Campaign say that while most students have the desire to go to college, many first-generation students worry about not working to help support their families or fear taking on student loan debt, particularly in an uncertain job market.

Others, lacking the support of someone at home who has been through the college application process themselves, may be deterred by something as seemingly insignificant as not knowing what to put down for “permanent address” on an application form, or by an inability to pay application fees, which are often waived by colleges for low-income students.

At Ottawa Hills High School in Grand Rapids, Mich., college adviser Gabe Pena, who was the first in his family to graduate from college, said that some students are drawn to work at one of the assembly-line jobs in southeast Grand Rapids, which beckon students with wages of $10 an hour.

“The majority of kids want to go to college,” Pena said. “There's this grand idea of college – it seems like something unattainable, but they want to get there. I help familiarize them with all the options.”

Laura Klinger, a college adviser at two high schools in rural St. Claire County, Mich., said that filling out a college application is often the easiest part of applying to college. But going through that process and receiving a notice of acceptance can boost a student's confidence, she said, and motivate them to continue through the red tape of orientations, housing deposits and financial aid forms.

“I think the value of having an adviser in the school is to try and help them with that process,” Klinger said.

Skyler said some of the students from his high school who don't go to college get involved with “bad stuff” like drinking, drugs and partying.

“I probably would have lived at home,” he said, reflecting on how different his life might be today. “I probably wouldn't have gone (to college) and a lot of things would be a lot different.”