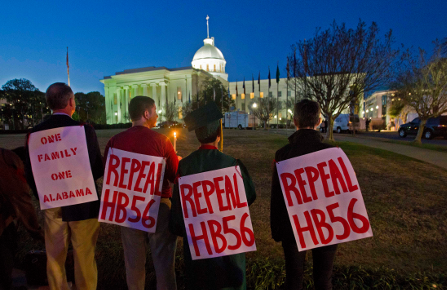 Demonstrators protest Alabama's immigration law at the Alabama capitol in 2012. State officials agreed to a settlement this week that would block many of the most controversial parts of the law. (AP)

After a string of legal defeats, Alabama officials who backed an ambitious law to deter illegal immigration now have agreed to scrap its most controversial aspects.

Luther Strange, Alabama's Republican attorney general, signed off on a settlement proposal that bars the state from enforcing may key provisions of the law; pays $350,000 in attorney fees to immigrant rights groups that challenged it; and restricts when local police can check the immigration status of suspects in custody.

“The attorney general's office has vigorously defended our state's immigration law in both the federal trial and appellate courts. The courts have upheld most of the act but have also made clear that some provisions are invalid. We have a duty to follow the law as set forth by the courts,” Strange said in a statement.

Many of the pieces of the law, known as House Bill 56, had already been blocked by federal courts. Several were similar to parts of an Arizona law, known as Senate Bill 1070, that were struck down by the U.S. Supreme Court last year.

Among the parts of the Alabama law that would be permanently blocked are provisions that would have:

The agreement also severely limits the law's “stop and verify” provisions — derided by critics as a “show your papers” law — that allow local police to check the immigration status of criminal suspects.

Alabama was the first state where that law went into effect, but it got off to a slow start. Under the agreement, police can not “stop, detain, arrest or prolong the detention of any person” to run an immigration check.

The court's majority let stand Arizona's immigration checks, but it did so with a warning.

“Detaining individuals solely to verify their immigration status would raise constitutional concerns. And it would disrupt the federal framework to put state

officers in the position of holding aliens in custody for possible unlawful presence without federal direction and supervision,” the court ruled.

Even after the settlement, a few parts of Alabama's law still remain in effect. The law, for example, requires Alabama businesses to use a federal database called E-Verify to ensure new hires are in the country legally. It blocks unauthorized immigrants from attending public colleges. And even after lawmakers tweaked the law last year, it still prevents unauthorized immigrants from seeking business licenses and other documents.

But Graunke said the agreement blocked the worst parts of the law.

“We really see it as this point as remnants and scraps remaining. We have really gutted the most harmful parts of the law in this litigation,” she said.

Other immigrant rights groups praised the deal as well.

“Today's settlement should remind legislators in both Montgomery and Washington that a person's constitutional rights may not be legislated away,” said Linton Joaquin, general counsel of the National Immigration Law Center, in a statement.

“Supporters of attempts to nationalize racial profiling policies such as Alabama's HB 56 should be warned: We will fight these efforts at the capitol and, if necessary, in the courtroom,” Joaquin said.