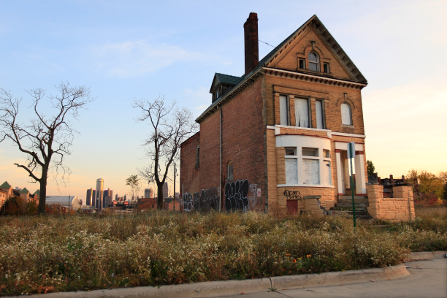 This home in Detroit represents a typical “zombie” because the property is still going through the foreclosure process but the resident has already fled. Zombies can drag down property values. (AP)

Vampires and zombies aren't just for Halloween and Hollywood.

The real estate industry uses these terms to describe certain kinds of foreclosed homes. And unfortunately for some states, these “monsters” could haunt their recovering housing markets.

Virginia, Nebraska, Alaska and Oklahoma have the highest rate of “vampire” property, referring to foreclosed homes that the banks took over but the homeowners still live there.

Missouri, Indiana, Oregon and Nevada had a higher percentage of “zombies,” or homes that are still going through the foreclosure process but are vacant. The homeowner who is being foreclosed moved out, but the bank hasn't yet taken over the property.

This is according to September figures from RealtyTrac, the online firm that tracks housing trends. 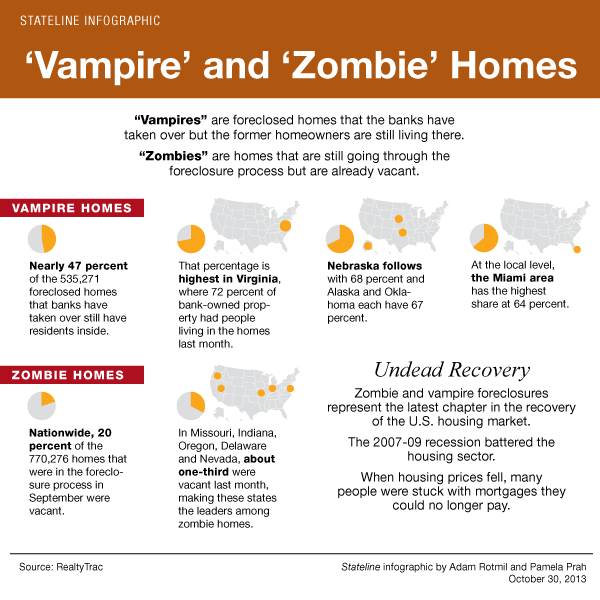 Of the two scary types, zombie homes are probably better known because they are more visible. These abandoned homes often aren't being maintained. Windows are broken. The lawn needs cutting.  The properties are more likely to be vandalized. The homeowners may have left unaware that they are still on hook for upkeep and taxes while the house goes through foreclosure.

“Those zombies also drag down the value of the surrounding neighborhood and lower tax revenue for the local governments,” Daren Blomquist, vice president at RealtyTrac, said.

Meanwhile from the outside, “vampire” properties often look like normal homes since people are still living in them.  The tenants may still be there for various reasons. The banks could have a backlog of foreclosures and just haven't kicked out the tenants yet. Or the foreclosure cases could be caught up in litigation. These properties represent added costs to whoever buys the property from the bank if the bank has to pay to evict the tenants from the home.

Vampire homes are more prevalent than zombies and the rates are much higher in some states.

Nearly 47 percent of the 535,271 foreclosed homes that banks have taken over still have people living in them, the latest RealtyTrac data show. That percentage is highest in Virginia, where 72 percent of bank-owned property had people living in the homes last month. Nebraska follows with 68 percent and Alaska and Oklahoma each have 67 percent, according to RealtyTrac. At the local level, the Miami area has the highest share at 64 percent.

Nationwide, 20 percent of the 770,276 homes that were in the foreclosure process in September were vacant, RealtyTrac said. That figure was highest in Missouri, Indiana, Oregon, Delaware and Nevada, where about one-third were vacant last month, making these states the leaders among zombie homes.

Some experts fear that the housing sector's recovery could be derailed if all of these nearly 400,000 vampire and zombie properties hit the market at once. The vampire properties, for example, “particularly are holding back inventory from the market, helping to make the market look better than it actually is,” Blomquist said.

On the flip side, these properties could be a bargain for savvy investors, particularly vampire bank-owned homes since other buyers may be unaware that the property will soon be listed.