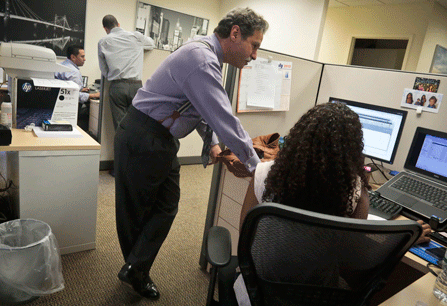 David Rosenbaum, president of Real-Time Computer Services, confers with a staffer in New York. States that have tried to tax technological services have run into fierce political resistance. (AP)

As the nation moves from a tangible goods-based economy to a service-based economy, a few states are trying to keep revenues robust by taxing technological services such as software upgrades and cloud computing. But a backlash from the high-tech industry has quashed most efforts.

As a result, the U.S. has a patchwork quilt of state taxes on technological services. Some states that have tried to impose such taxes have failed spectacularly, and most have not tried at all.

According to the Tax Foundation, a nonpartisan think tank that studies taxes, only 10 states (Connecticut, New Mexico, Hawaii, South Dakota, Mississippi, Missouri, Nebraska, Tennessee, Texas and West Virginia) and the District of Columbia tax all writing or updating of software. Only New Mexico, Hawaii and South Dakota levy their general sales taxes on all software services.

States with sales taxes do, however, levy those taxes on software that is sold on CDs or other hard storage materials. About half the states also tax “canned” (non-altered) software that can be downloaded, according to the Tax Foundation.

Elia Peterson, an analyst with the foundation, said in a recent paper that states are reluctant to tax computer services in large part because it “is an especially mobile industry and could easily move to a lower tax state.”

Massachusetts illustrates the point.  Last August, the Massachusetts legislature passed – and then repealed, in a matter of weeks – a tax on computer services and modifications to equipment and software. The tax was approved as part of a plan to fix roads, subways, buses and bridges. Lawmakers decided to plug a $160 million hole in the budget with a 6.25 percent sales tax on tech services.

The legislature approved the bill overwhelmingly—then tech lobbyists discovered what had happened to them.

Andrew Bagley, director of research and public affairs for the Massachusetts Taxpayers Foundation, an anti-tax group, said the tax caught most business people by surprise, largely because it was part of a transportation bill, not the regular budget bill. At the time, Bagley said, proponents argued that it wouldn't be a big deal because many other states tax software.

But on closer examination, it turned out that the 6.25 percent tax Massachusetts was different: It taxed software services, not the software a customer can buy at a retail store, and it was a rare tax on business-to-business services.

In addition, the 6.25 percent tax Massachusetts was implementing was significantly higher than similar taxes in other states. Neighboring Connecticut, for example, has a 1 percent on technological services.  And New Hampshire doesn't have any sales tax at all.

Bagley put together a coalition to oppose the tax. It was led by restaurateurs who update their software almost daily as they add new items to the menu or offer specials. Bagley's group threatened a referendum drive to repeal the tax.

“We told them (state officials), ‘You have no idea. You are striking right at the core of what makes every company here competitive in a global environment,'” Bagley said. “It turned around in 60 days.”

The state Senate voted unanimously to repeal the tax, while in the House the vote was 156-1. The lone holdout, Democratic state Rep. Angelo Scaccia of Readville, said he was concerned about replacing the lost revenue.  So far, state officials haven't said exactly how they plan to do so, though they have talked about “shifting” funds from other sources.

Almost the exact same thing happened in Maryland in 2007, when the state tried to levy a 6 percent tax on computer services that would have gone into effect in 2009. A year after the new tax was approved, the Maryland House of Delegates and Senate voted to repeal it.

The same arguments that killed the Massachusetts tax were put forward in Maryland, according to Abba David Poliakoff, a lawyer who was on the board of the Greater Baltimore Technology Council at the time. “We brought to their attention that by taxing software services they were restricting the growth of one of the pre-eminent growth industries in the state,” he said.

Poliakoff said Maryland's technology industry was not well-organized in 2007. Now, however, the industry is actively pushing for tax breaks, rather than defending itself against tax increases. Tech lobbyists have scored some significant victories, especially for companies that specialize in cybersecurity.

Joseph Henchman of the Tax Foundation noted that the sales tax base on goods has shrunk from 60 percent of the U.S. economy in the 1960s, to 30 percent of the economy today. Nevertheless, most states continue to exempt services from sales taxes. According to the foundation,  21 states tax repair services, 19 tax landscaping, 18 tax cleaning services, six tax lobbying, three tax legal services and two tax medical services.

States have now gone about as far as they can in increasing sales taxes on tangible goods, leading them to look for other sources of revenue.  The reward can be substantial: In 2006, New Jersey began taxing about a dozen services, including tanning, tattoos and limousine rides, boosting its annual revenues by about $400 million.

Ronald Alt of the Federation of Tax Administrators also emphasized the difficulty of enacting new taxes on services. “There hasn't been a lot of broad scale expansion. There's been a big political backlash against those.” Alt cited proposals in Ohio and Nebraska, among others, that didn't go anywhere this year. Part of the reason, he said, is that “traditionally, economists believe that it leads to pyramiding – pass it on, and the consumer ends up paying a whole lot more taxes.”

Meanwhile Michigan, which now imposes sales and use taxes on cloud computing, is debating measures that would eliminate that tax, in the name of competition. The two bills have passed the state Senate. Last week, the House Tax Policy Committee approved them unanimously, sending them to the full House.

A spokesman for Gov. Rick Snyder, Republican, said the administration opposes the bills “because the language is too broad” and could cost the state “$12 million in lost tax revenue – and that number would grow higher as cloud computing increases,” Dave Murray said in an email. 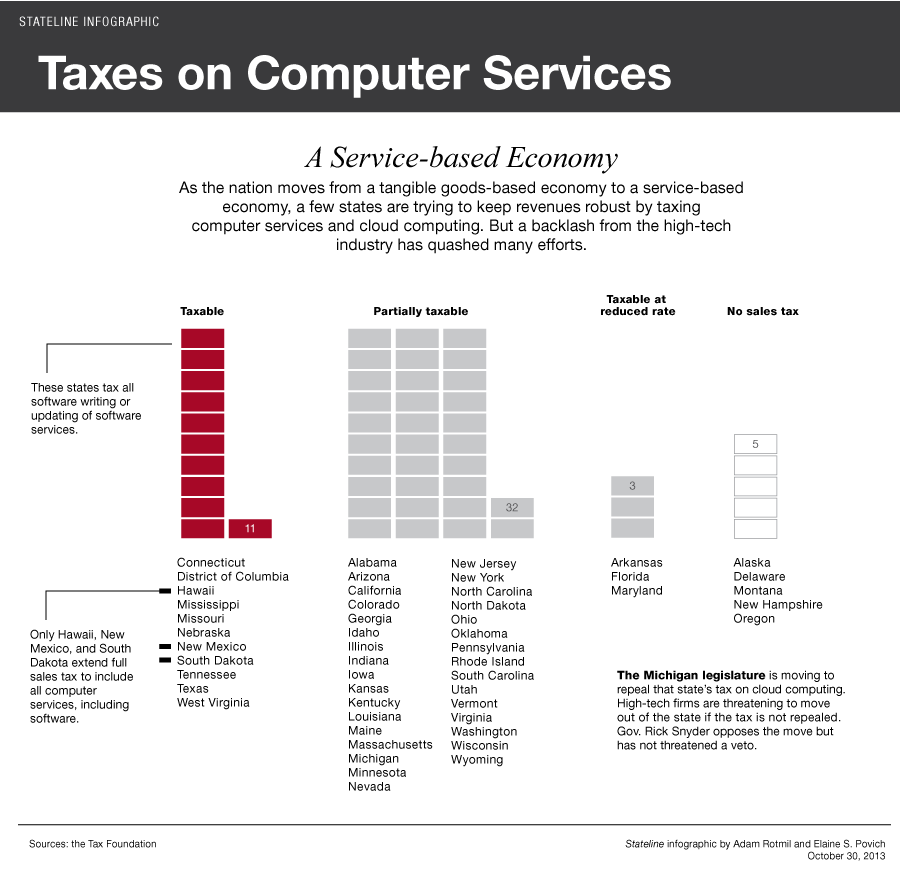