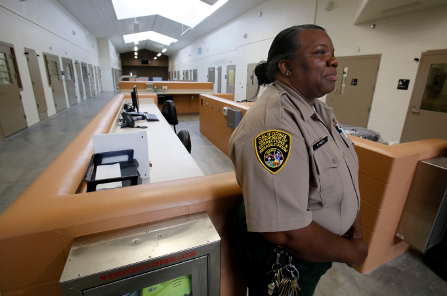 State spending on prisoner health care increased in 42 states between 2001 and 2008, with a median growth of 52 percent, according to a new report from The Pew Charitable Trusts. The primary driver of the cost spike is bigger and older prison populations.

“Health care is consuming a growing share of state budgets, and corrections departments are not immune to this trend,” said Maria Schiff, director of the State Health Care Spending Project, an initiative of Pew and the John D. and Catherine T. MacArthur Foundation. 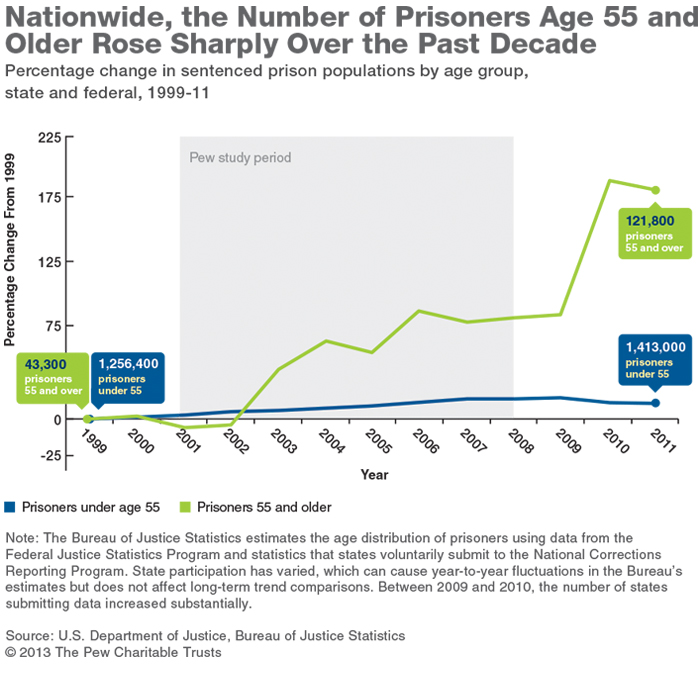 Pew analyzed inflation-adjusted correctional health care expenditures collected by the U.S. Department of Justice from 44 states that participated. Overall, these states spent $6.5 billion on inmate health care in 2008, up from $4.2 billion in 2001. Average per-inmate spending also grew in 35 of the states during the same period at a median rate of 32 percent.

Of the states in the study, prisoner health care costs in Illinois and Texas decreased. Those not included in the study are Georgia, Kansas, Kentucky, New Mexico, Vermont, Wyoming and Washington, D.C.

Although sentencing changes have resulted in a recent decline in the prison population, the number of people held in state prisons ballooned over the last 30 years. During the study period, it grew by about 200,000, a 15 percent increase.

During the same period, the number of state and federal inmates age 55 and older grew from 40,200 to 77,800, a 94 percent increase. Since 2008, the number of elderly inmates has continued to grow to 121,800 in 2011. The aging of the prison population is the result of a large number of inmates living out longer sentences and an uptick in the number of older people who are sent to prison.

Like the the population on the outside, elderly prisoners are more likely to have chronic medical and mental conditions that require expensive treatments. The health care costs for inmates age 55 and older with a chronic illness is on average two to three times that of the cost for other inmates, according to the study. 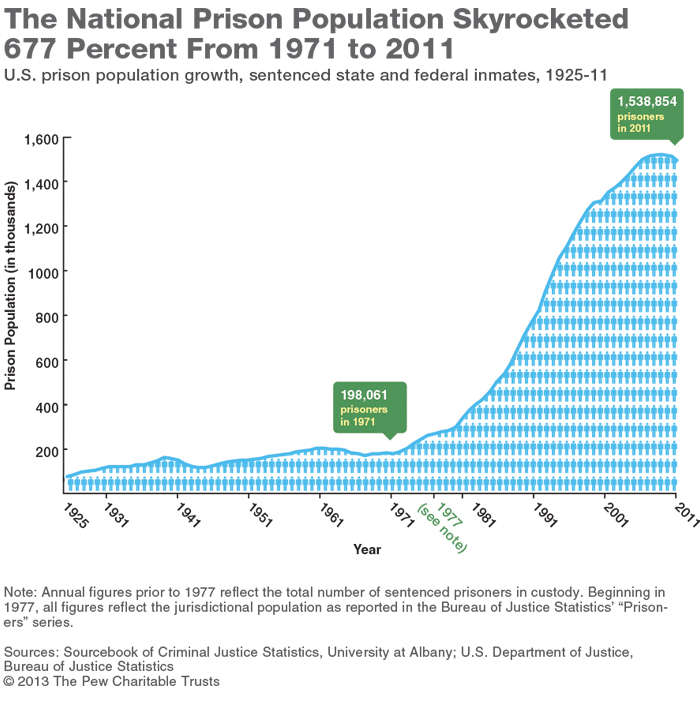 States have developed a number of strategies to mitigate the rising cost of caring for prisoners, including increased use of telemedicine and the outsourcing of medical services to state universities and other providers, according to the report.

In addition, a small number of states have made limited use of Medicaid to help finance rising prison health care costs. The potential benefits of Medicaid financing will increase substantially in 2014 when the Affordable Care Act takes effect, but only in states that expand their programs.

Currently, most state Medicaid programs cover very few childless adults, who make up the bulk of the prison population. In most cases, only pregnant women and disabled inmates are eligible for Medicaid.

By expanding Medicaid to all adults with incomes up to 138 percent of the federal poverty line ($11,490 for an individual), virtually everyone who is incarcerated will qualify for the federal-state program. The federal government will pay 100 percent of costs for newly eligible adults from 2014 through 2016 and gradually decrease its share to 90 percent by 2020.

For inmates, Medicaid pays only for health care services provided outside of prison walls. But those charges – for inmates admitted for 24 hours or more to a hospital, nursing home or psychiatric center – are often substantial.

In Ohio, where Republican Gov. John Kasich recently circumvented the GOP-led legislature to approve the expansion, the state estimates it will save $273 million in prison health care costs in the first eight years. Michigan expects to save about $250 million on inmate health expenses in the first 10 years, and California expects to save nearly $70 million each year.