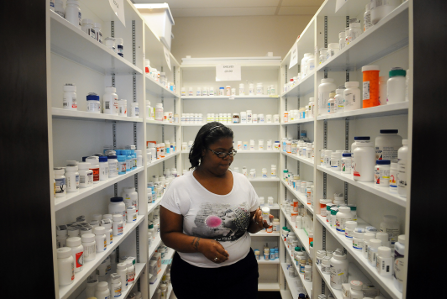 Anya Chapman manages the prescription drug inventory at Washington D.C.'s Whitman-Walker Clinic, which treats patients with HIV. The Affordable Care Act likely will have a huge impact on people who have HIV or AIDS. (Getty Images)

The Affordable Care Act will broaden health care coverage for many of the 1.1 million Americans infected with HIV, especially those who live in the 25 states and the District of Columbia that have opted to expand Medicaid. In those states, the larger Medicaid programs will cover about 60 percent of the mostly uninsured patients currently receiving help from federal-state HIV programs.

Medicaid will cover all of their health needs, not just their AIDS/HIV treatments.

Nationwide, another 30 percent of the people receiving HIV services now will qualify for tax subsidies to help them purchase insurance on exchanges, according to data from the National Alliance of State & Territorial AIDS Directors.

As a result, state officials who run so-called Ryan White programs that provide health care and other services for HIV-infected residents are preparing for a major shift in the type of benefits they offer and possibly the level of future investment.

What are the biggest ACA benefits for people with HIV?

In addition to expanding Medicaid, the ACA prevents insurance companies — whether they are on the exchanges or not — from dropping or denying coverage or charging higher rates for people with pre-existing conditions such as HIV/AIDS.

Currently, at least 30 percent of HIV infected people are uninsured. That compares to 15 percent in the general population, according to a study from the Kaiser Family Foundation. Until the ACA was enacted, private insurers often dropped people diagnosed with HIV, and it was difficult for people with the virus to purchase health insurance at an affordable price.

Top 10 States and Territories by Concentration of HIV Diagnoses

How do HIV/AIDS programs work now?

Under a 1990 law named after Ryan White, an Indiana teenager who died of AIDS, the federal government gives block grants to states to provide a variety of services for people with HIV/AIDS. In 2012, federal funding totaled $900 million. States are not required to contribute, but many do. Total state funding in 2012 was $275 million.

The bulk of the money has traditionally gone to a program called the AIDS Drug Assistance Program, under which states purchase antiretroviral drugs for people with HIV who can't afford them.

Over the last decade, however, states have used more of the money to purchase health coverage for uninsured HIV clients, instead of directly purchasing drugs. This practice has saved money and resulted in better health outcomes, including fewer hospitalizations and longer lives. The AIDS Drug Assistance Program is not intended to provide comprehensive health care in the way Medicaid or private insurance do.

Will the ACA cause major changes to HIV/AIDS programs?

The answer is not yet known. In calculating the budget implications of expanding Medicaid, many states assumed a reduction in state funding for a variety of adult health care programs, including Ryan White. Some even questioned whether the program would be necessary after 2014.

But those calculations were only theoretical.

When Massachusetts expanded its Medicaid program in 2000 to include low-income HIV-infected adults, it maintained its investment in existing HIV treatment programs. It did the same when it implemented its health care reforms in 2006, resulting in nearly universal health care coverage. Instead of cutting back, Massachusetts was able to offer assistance to more people, precipitously reducing the spread of AIDS.

However, in the 23 years since the Ryan White program began, states have adopted widely varying approaches to the structure and funding of HIV programs.  A similar patchwork is expected in the future.

Is the federal government expected to maintain AIDS funding?

Yes. In 2011, the results of a randomized clinical trial showed that treatment of HIV/AIDS with a cocktail of antiretroviral drugs reduced the risk of sexually transmitting HIV by 96 percent. In response to this landmark study, state and federal officials decided to redouble their efforts with the goal of stamping out the deadly disease altogether.

Historically, federal funding has kept pace with inflation, but not with the spread of the disease, advocates say. Congress' most recent authorization of the Ryan White law expired Sept. 30, although the law will stay in force indefinitely.

The Obama administration, advocates and state officials have agreed to wait to see how much the ACA benefits people with HIV before making any major changes to the federal Ryan White law.

What about Medicaid expansion under the ACA?

Medicaid expansion is the top priority for AIDS advocates, said Ronald Johnson, vice president of policy for advocates AIDS United.  If more states decided to expand Medicaid, it would have a major impact on the overall health of people with HIV.

About half of all Americans with HIV live in the South, where GOP governors and lawmakers have almost uniformly opposed the expansion. Louisiana, Florida, Georgia, Mississippi and Texas are among the top 10 states and territories with the highest concentration of HIV diagnoses. None of those states has agreed to expand Medicaid as part of the ACA.

In states that are expanding Medicaid, Johnson said his organization and others are urging states to provide an adequate transition period for Ryan White clients who become newly eligible for Medicaid. Advocates also want states to more closely integrate new Medicaid benefits with Ryan White services than they have in the past.

When are states expected to recalibrate Ryan White programs?

It remains to be seen. A lot will depend on how many states ultimately decide to expand Medicaid and how many HIV infected people enroll in the program. Similarly, shifts in the program will hinge on how many HIV-infected people ultimately sign up for private insurance on the exchanges and whether they will be able to pay the relatively high deductibles and co-payments the policies will require of all customers.

Another unknown is exactly how well public and private insurance will cover the complex health care needs of those with HIV. For example, many insurers currently do not provide adequate coverage of the transportation, case management and dentistry needs of HIV-infected people, said Amy Killelea of the National Alliance of State & Territorial AIDS Directors.

It is not clear whether coverage gaps will improve as states interpret the ACA's essential benefits requirements, she said. “The case is being made that Ryan White and other AIDS programs cannot be offset,” Killelea said. For now, states are trying to figure out where exchange coverage and Medicaid stops and where Ryan White should start.