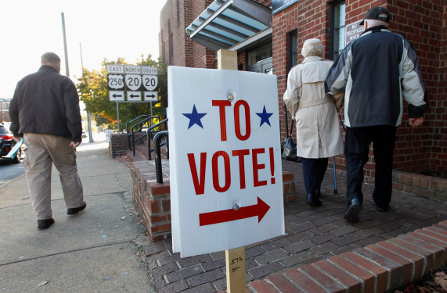 Voters walk into the Key Center to cast their votes in Charlottesville, Va. last year. Voters will decide state legislative races in Virginia, Washington and New Jersey next month. (AP)

Voters are sick of politicians, and their disillusionment is making it tricky for state legislative candidates on the Nov. 5 ballot.

The office seekers are mostly talking about local issues, in the wake of a two-week federal government shutdown and years of partisan conflict in Washington and state capitols. But they are also mindful that their races could have broader implications.

A big shake-up is probably a long shot, but outside interests are spending millions of dollars in fights over control of the state senates in New Jersey and Washington. The Virginia House of Delegates, firmly in Republican control, features several hard-fought races. There is even a chance a domino effect from the November elections could put the Republican-held Virginia Senate into Democratic hands.

“People are really tired of (politicians) who don't compromise. They want more moderate government, and they want government to function better for them,” said Democrat John Bell, who is running for a state House seat in the Virginia suburbs of Washington, D.C.

“People are turned off. People do not want Washington-style politics in Virginia. They have enough of it across the river,” Ramadan said. “From day one, I said these partisan politics need to end. People are appreciating that position.”

Both candidates say they want to focus on everyday issues, like how to improve transportation in their traffic-snarled district.

While the issues differ from state to state, the mix of parochial concerns and antipathy toward overt partisanship are familiar themes.

Their focus is on the state Senate, where Democrats hold a 24-16 edge. Republican control of the Senate could make Christie's job easier during a second term.

Despite the governor's popularity, Democrats say they are in a good position to hold both the House and the Senate.

“You are seeing a governor with absolutely no coattails,” said Dan Roth, a spokesman for the Democratic Legislative Campaign Committee, a national group supporting Democrats running for state legislative seats.

Roth said New Jersey voters agree with Democrats on key policy questions, which is why they support Democrats for the legislature even as they back Christie for governor.

A September poll from Rutgers University's Eagleton Institute of Politics showed that half of likely voters said they favored Democratic candidates for the legislature, compared to 38 percent who preferred Republicans.

“Right now (voters) seem to be quite happy to split their tickets, supporting a Republican governor and a Democratic legislature,” said poll director David Redlawsk.

Chris Jankowski, president of the Republican State Leadership Committee, a national group that supports state GOP candidates, said it is too early to tell what Christie's impact will be.

“You measure coattails on 11 o'clock on election night, and not before that point,” Jankowski said.

This year's elections mark the first time that New Jersey elections officials have allowed unlimited fundraising from outside political groups that do not directly coordinate with candidates.

The group that pushed for the changes in New Jersey — the Fund for Jobs, Growth and Security — has spent more than $2.5 million this year to weigh in on legislative races and ballot measures, supporting Democratic positions.

On the Republican side, Americans for Prosperity, a conservative group, spent $400,000 and the RSLC spent $268,000 by mid-October, according to the commission.

The governor's race in Virginia is closer than New Jersey's, but no major changes are likely in party control of the legislature. Senate seats are not on the ballot this year, and Republicans will likely hold on to their lopsided majority in the House of Delegates.

Geoffrey Skelley, a political analyst at the University of Virginia's Center for Politics, said it would be “virtually impossible” for Democrats to pick up the 19 seats they would need to take over the House.

Statewide elections, however, could cause a power shift in the state Senate, where Republicans and Democrats both hold 20 seats. Republicans functionally control the chamber, because ties are broken by the Republican lieutenant governor.

But three state senators are running for higher office this November: two are facing off in the attorney general's race and a third is running for lieutenant governor. So control of the Virginia Senate could depend on the outcome of special elections held to replace any senators who win statewide office. There is no specific deadline for such an election to be held, and it could happen after the legislature's 2014 session.

The gubernatorial contest between Democrat Terry McAuliffe and Republican Ken Cuccinelli, the state's attorney general, could affect the outcome of races farther down the ticket. Recent polls show McAuliffe ahead, although both candidates are unpopular.

“The impact there (on House races) will be more about turnout of Republican base voters. … If the base does not feel like we are winning, or are not motivated, that can impact your whole ticket,” Jankowski of the RSLC said.

Roth, from the national Democratic group, said Virginia voters are turned off by Cuccinelli's reputation for fighting the Affordable Care Act and for promoting conservative positions on social issues, including abortion.

“It's been a repudiation of the far-right issues that the Virginia General Assembly has been so focused on… and a real desire to move on to these pragmatic issues that Democrats have been pushing,” Roth said.

A special Washington state Senate election this November has attracted $2.5 million in donations, making it the most expensive legislative contest in the state's history.

Republicans control the chamber now, but only with the help of two Democrats who caucus with them. If Republicans take the seat, based in the Kitsap Peninsula southwest of Seattle, they would secure a firmer grasp on the chamber and would be only one seat away from taking control outright.

November's contest pits Democratic state Sen. Nathan Schlicher, an emergency room doctor who has held the seat since January, against Republican state Rep. Jan Angel, who wants to move to the upper chamber. (Whoever wins would have to run again in a regular election next year to hold on to the seat.)

Angel placed first, ahead of Schlicher, in the August “top-two” primary that Washington uses to narrow fields of candidates.

But a flood of outside money has since elevated the profile of the race. California billionaire Tom Steyer, who supports environmental causes, has funneled at least $400,000 into the contest to help Schlicher, the Democrat.

Keith Schipper, a spokesman for the Angel campaign, said because of Steyer's money, people in the district “are being bombarded with unfortunate lies.” Voters in the district are wary of the outside money being spent in the race, Schipper said.

On the campaign trail, Angel is talking about blocking tax hikes proposed by Democrats to comply with a state Supreme Court ruling mandating that the state spend more money on schools.

Schlicher said he is focused on issues such as school funding and transportation. He criticized the Republican-led majority caucus for brinksmanship over the state budget, calling it a precursor to the federal government's shutdown this month.

“That kind of irrational hostage-taking needs to stop,” he said. “(Voters are) tired of career politicians on both sides of the aisle.”