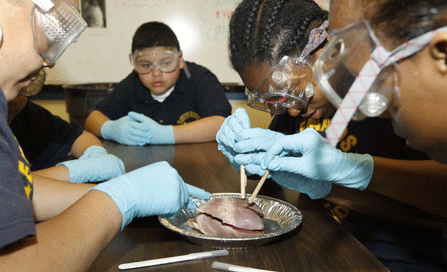 Students at a Boston middle school study a guinea-pig heart during their science class. A new study shows that Massachusetts eighth-graders rank highest in science and math, and compare favorably with their international counterparts. (AP Photo/Bizuayehu Tesfaye)

Comparing American students to their international peers typically prompts hand-wringing over the failures of U.S. schools. But a new study shows that when compared to their foreign counterparts, U.S. eighth-graders attending public schools in 47 states are actually above average in science.

Americans also fare well in math, with students in 36 states above the international average.

The study by the federal National Center for Education Statistics used scores from American eighth-graders who took the National Assessment of Education Progress (NAEP) in 2011 to predict what their performance would be on the Trends in International Mathematics and Science Study (TIMSS), a highly respected gauge of academic ability.

Researchers used the actual TIMSS scores of students in nine U.S. states to test their predictions.

Although most U.S. states were above average, the study showed wide disparities among them. And even the U.S. state with the highest scores, Massachusetts, produces far fewer top-performing students than the top-ranked education systems: Nineteen percent of eighth-graders in Massachusetts were rated “advanced” in math, compared to about half the students in Taiwan, Korea and Singapore.

In 2011, students from more than 60 countries and subsections of countries participated in TIMSS.

“We conducted this study because it's important to know how students educated in U.S. states are performing against international standards,” said NCES Commissioner Jack Buckley.

In math, average state scores ranged from 466 in Alabama to 561 in Massachusetts. The average score in the U.S. was 509. Korea, Singapore, Taiwan, Hong Kong and Japan all outperformed Massachusetts.

Among the 36 states with average scores of at least 500 in math, the proportion of students scoring high or advanced ranged from 29 percent in Arkansas to 57 percent in Massachusetts.

In science, average state scores ranged from 453 for the District of Columbia to 567 in Massachusetts. The average score in the United States was 525. Singapore was the only education system with a higher science average than Massachusetts.

Among the 47 states with average scores of at least 500 in science, the percentage of students scoring high or advanced ranged from 31 percent in Hawaii to 61 percent in Massachusetts.

Maria Ferguson, executive director of the Center on Education Policy at George Washington University, said that while interpretations of the data will vary, “Massachusetts is clearly doing a couple of things right, even if you're not one of the people who believes test scores dictate everything.”

Ferguson said policymakers should explore why Massachusetts might be performing at such a high level, citing the quality of the state's teachers and its education spending as possible factors in its success.

NAEP, known as the nation's report card, is the largest nationally representative and continuing assessment of American students in reading, math, science, writing and other subjects. TIMSS tests fourth- and eighth-grade students internationally in math and science. Students are ranked below low, low, intermediate, high and advanced. The study by the National Center for Education Statistics looked only at eighth-graders.

When the 2011 TIMSS scores were released last December, U.S. Education Secretary Arne Duncan said that the results showed that “demography is not destiny in our schools.”

“State and local policy matter – and can have a powerful influence in advancing or slowing educational progress,” Duncan said at the time.