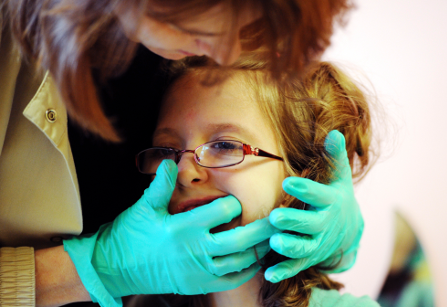 A speech language pathologist in Evansville, Ind., teaches a girl born with Pierre Robin Sequence, a congenital defect characterized by a small jaw, to chew and swallow. Many insurers will have to cover such “habilitation” services under Obamacare. (AP)

“To rehabilitate,” according to the Merriam-Webster dictionary, means “to restore to a former capacity.”

But what if that capacity — be it walking or talking or brushing one's teeth — was never there in the first place?  In that case, you aren't talking about “rehabilitation” but “habilitation.”

People need habilitation when they have a congenital defect or disease that impairs the development of basic life skills. For example, autism may leave a child unable to speak. Cerebral palsy may result in language deficits and severe physical limitations. Birth defects may leave a child deaf.

Thanks to the Affordable Care Act (ACA), habilitation services will now be widely covered for the first time in private insurance plans. Rehabilitative and habilitative services are among the 10 “essential benefits” that must be provided by all plans sold on all the state and federally run health insurance exchanges. Starting in 2014, all individual and small group health policies sold outside the exchanges also will have to cover habilitative services.

But as is the case with some of the other “essential benefits,” the federal health law mandates coverage of habilitation services without spelling out exactly what that means. The states, together with insurers and advocacy groups, will have a big say in what, and how much, is covered.

The computer deficiencies that have plagued the exchanges since they opened on Oct. 1 have further muddied the picture, since few people have read what insurers on the exchanges are offering. “How this all plays out very much remains to be seen,” said Daniel Brown, senior state policy analyst for the American Occupational Therapy Association.

The number of people who might benefit from such services also is uncertain, Brown said. However, 15 percent of children between the ages of 3 and 17 have one or more developmental disabilities, according to the Centers for Disease Control and Prevention.

The cost of habilitative therapy varies widely, but can be quite expensive. One form of therapy used to treat those with autism, “applied behavioral analysis,” can cost $50,000 or more a year.

Before the ACA, habilitative services were inconsistently covered in health insurance plans. Most insurers took the view that teaching skills to the developmentally disabled was an educational matter rather than a health care concern. But as the disabled movement has gained influence over the last 50 years, that view has become far less than universal, even among insurers.

For one thing, it has become clear that financially strapped school systems do not have the resources or expertise to meet the habilitation needs of their students. In response, Medicaid in 1989 added habilitative services to its benefits menu, and dozens of states began to require insurers operating in their states to offer habiliative benefits. However, the coverage requirement varies widely from state to state, and many states have limited it to children with autism.

That was the situation when the ACA was being crafted in 2009 and 2010. For part of that time, people with disabilities had a formidable ally on Capitol Hill in Sen. Edward Kennedy of Massachusetts, who died in August 2009. Kennedy, whose sister Eunice Shriver founded the Special Olympics, was a longtime champion of services for the developmentally disabled.

When the details of the insurance plans sold on the exchanges finally emerge, advocates will scrutinize the limitations imposed on the habilitative services offered.

For example, they would oppose a lifetime cap on the number of therapeutic visits patients are entitled to under habilitative services. They also are wary of combining rehabilitative and habilitative visits under one cap, because a person could exhaust all visits for habilitation and have nothing left for rehabilitation. Brown said children with congenital problems sometimes suffer falls or other accidents that require rehabilitation.

“We wouldn't want (insurers) to say, if you get rehab you don't need hab,” said Laurie Alban Havens, who advocates for insurance policy changes for the American Speech-Language-Hearing Association (ASHA), a professional organization representing various types of therapists.

Advocates also will be surveying plans to make sure “maintenance” services are included. After reaching a certain level of ability, a person typically needs help to keep that ability. ASHA and similar organization argue that maintenance often requires skilled therapy rather than the custodial level of care that insurers prefer to provide.

“We wanted parity but the question was, ‘what does that mean?'” said Cynthia Crone, a deputy insurance commissioner in Arkansas. For example, an insurance plan might provide 60 days of in-patient rehabilitation without specifying whether habilitation, which doesn't usually require in-patient care, is covered.

However the states interpret habilitative services, it will certainly be subject to challenge by consumers, regulators and the courts. Jan. 1, when the ACA officially takes effect, will mark only the start of that process.