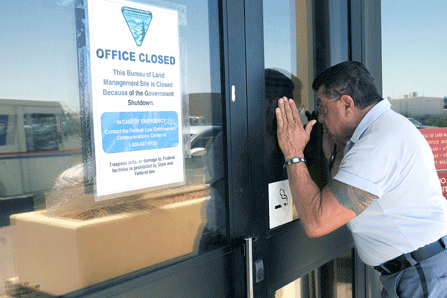 U.S. Postal Service letter carrier Jacob Ribald peers into the window of the closed Bureau of Land Management office in Las Cruces, N.M. New Mexico is among the states hardest hit economically by the shutdown. (AP)

States with large military installations and major research institutions will suffer the greatest economic hit from the 16-day federal shutdown – especially the Washington, D.C. area, New Mexico and Alabama, according to  new estimates from Moody's Analytics.

Outside of the capital region, Moody's Analytics projected New Mexico's economy could suffer an 0.63 percentage point drop in the fourth quarter and Alabama 0.55 percentage points.

The national economy will likely be back to recovery by early 2014 after Congress and the White House reached a bipartisan deal that reopened the federal government and raised the debt ceiling, according to Steven G. Cochrane, managing director of Moody's Analytics.

But the fallout will hurt states long after the federal workforce is up and running again. States like Hawaii and New Mexico are affected in an outsize way because of the concentrations of research institutions and civilian employment attached to military bases.  The economies of Arizona, Colorado, Idaho, Utah and Washington State are also affected more because of large concentrations of federal agencies related to natural resources and land management, Cochrane said.

The fact that civilian defense workers returned to work one week into the shutdown will help soften the blow. “But some spending on services cannot be made up, and the multiplier impacts from federal contractors shutting down will be more pernicious,” Cochrane said in his latest regional forecast.

Alabama, Kentucky, Mississippi and Georgia also will feel some impact, but again, that will be reduced by the early end of defense-related furloughs.

“The next question is how much uncertainty from the new deadlines … lead to a broader slowdown in the economy,” he said. “Given the statements from the congressional leadership and probably the fatigue in Congress of just going through this, they will find ways to breeze through those January and February deadlines without creating any issues. I don't think anyone wants to relive the events of the past three weeks so soon again.”

States could suffer further if Congress doesn't reimburse the costs for re-opening national parks. The bill to reopen the government, which passed early Thursday, did not include funds to pay back states that opened national parks from Liberty Island in New York to the Grand Canyon in Arizona.

Sen. Lamar Alexander, R-Tenn., has introduced a bill that would compensate the states for the money they spent in reopening the national parks within their borders. But there is no exact amount included in the bill and passage is not guaranteed.

Mike Saccone, press secretary for Sen. Mark Udall, D-Colo., who is co-sponsoring the bill, said it would refund the states for the funds they used to open the national parks. In Colorado, he said, opening Rocky Mountain National Park was essential, not just for the economic benefit, but because the roads in the park circumvent U.S. 34 and U.S. 36, which were washed away in the recent severe flooding suffered by the state.

Visitors spend about $76 million a day in communities near national parks, the National Park Service estimated.

Among the states that ponied up funds to keep the parks open:

The bill to open the government and lift the debt ceiling did include back pay for federally funded state workers who were kept on the job during the shutdown. Any states that used their own money to pay these workers will be reimbursed, according to an analysis by the National Association of State Budget Officers. 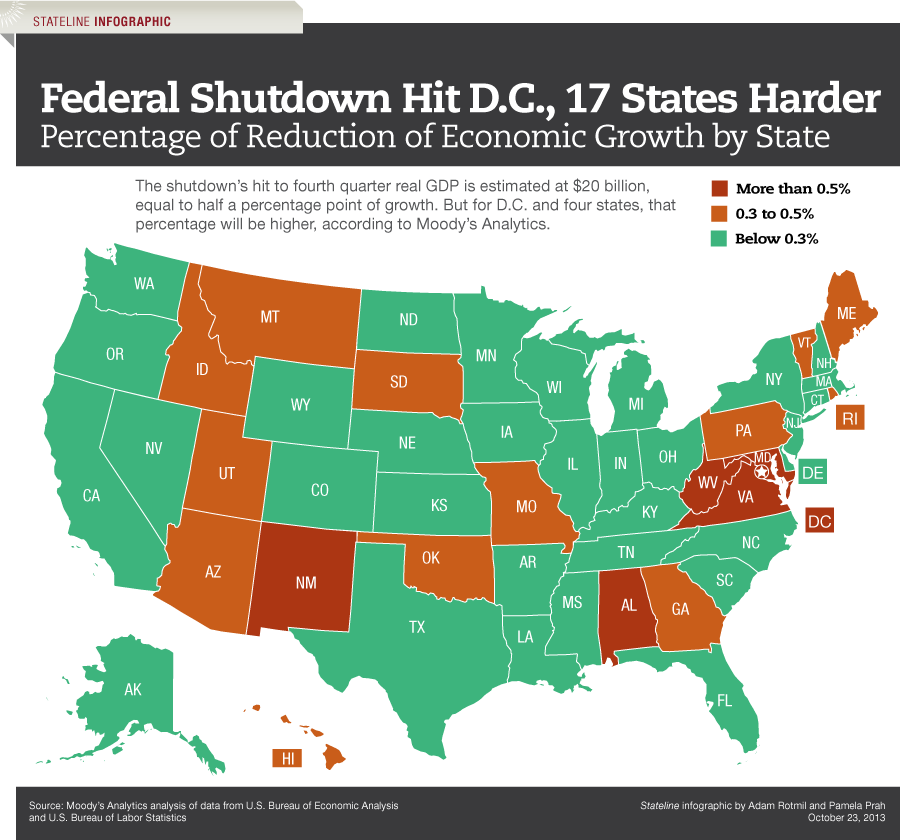