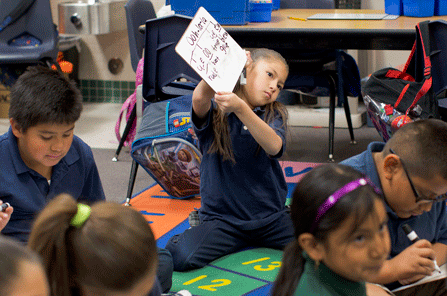 A student at a Las Vegas elementary school where 83 percent of the incoming kindergartners don't speak English. States are striving to come up with a common definition of “English language learner.” (AP)

If a U.S. student learning English were to drive across the country, he would find that in some states he would be classified an “English-language learner,” eligible to receive extra support.  In other states,  the same student would not qualify for the special designation—or the additional help.

In California, for example, English-language learners spend part of the day focused on learning English. The rest of the day, teachers help them learn the same material as native English speakers, with some modifications. For example, they might be divided into smaller groups with other limited English speakers, or receive a preview or review of the lesson in their native tongue.

The label matters, because under the federal Civil Rights Act, schools are required to provide English-language learners with additional services to ensure they master English as well as the material other students are learning.

The wide variety in policies also creates headaches for students who move from state to state, or even from one school district to another, as they may suddenly find themselves lumped into a new category.

Now that nearly all the states have agreed to adopt common standards in English and math, known as the Common Core State Standards, some states are striving for a common definition of an English-language learner. The task likely will take years, given the political and policy thickets that need to be cleared.

A common definition would help English learners to receive better educations, said Robert Linquanti, project director for English Learner Evaluation and Accountability Support at WestEd, a nonprofit education research organization based in California, and one of two co-authors of a recent report.

“If I'm a parent with a kid who's been designated [an English learner], I want to know that the educators at the school have enough understanding about where my kid's language proficiency is and where they're aiming to have my child go,” Linquanti said. “If we have varying definitions…it's much less likely my students will get a coherent set of services.”

California, which has about 1,000 school districts, has “1,000 different definitions of what's an English learner,” Linquanti said. “A kid could be an English learner in one district, cross the road into another and be considered not an English learner. It has an effect on the quality of instruction a kid can receive.”

From the school years 2002-03 to 2009-10, the number of limited English proficient students in K-12 nationwide grew by 7 percent, to 4.65 million. California has the highest percentage of English-language learners with 23 percent of enrollment in public schools in 2010-11.

Among those prodding the states to agree on a definition is the federal government, which gives money to the states to help English learners but struggles to evaluate how well states are using it.

The U.S. Department of Education's latest biennial report to Congress on Title III funding to states for English learners cautions, “Each state has its own standards, assessments, and criteria for ‘proficiency,' for both English proficiency and academic content proficiency, as well as its own identification and exit criteria for English proficiency. Thus, the same child could be designated ‘proficient' in English or in mathematics in one State, but not in another.”

The federal government cannot force the states to agree to a common definition of English learners, but it has created financial incentives for states to do so.

States that belong to any of the four groups that are developing standardized tests for either the Common Core or to measure English language proficiency have agreed to establish a common definition within those groups of an English learner as a condition of federal grants. The two groups that are developing tests for the Common Core are Smarter Balanced and Partnership for the Assessment of Readiness for College and Careers (PARCC). The two groups that are working to develop tests to measure English language proficiency are English Language Proficiency Assessment for the 21st Century (ELPA21) and Assessment Services Supporting ELs through Technology Systems (ASSETS). Most states belong to at least one of the four groups.

Those working on developing assessments for the Common Core will have to decide what kind of accommodations to allow for English learners – no easy task when school districts and states have such varying definitions. Under No Child Left Behind, English learners are allowed to take standardized tests for language arts in their native language for up to five years, for example. Other accommodations for English learners may include extra time to take tests, dictionaries and having access to recorded instructions in their native language.

The Council of Chief State School Officers has been working on the issue as well. The organization, which represents the top education officer from each state, has a task force on English-language learners and in September convened a group of experts and stakeholders on the subject of a common definition of English learners. The group recently released a report to outline important issues and chart a path for discussions.

The report outlines a four-stage process for English learning: an initial screening to identify students who might be eligible for services, an evaluation to confirm whether a student is an English learner, determining a standard for English proficiency, and deciding how and when a student can graduate out of English learner status.

Currently, even the first step of that process – typically a written survey sent home to parents to determine if a child might be eligible for English support services – varies tremendously. Some states ask parents three or four questions and some ask more than 20. The wording on such surveys also has major implications. Parents may wonder, for example, if a questionnaire is aimed at determining citizenship status, which could influence how they respond.

Similarly, deciding when a student no longer needs additional support is a complicated and critical decision. How advanced should the student's reading, writing, listening and speaking skills be, and how much weight should be given to each?

According to the CCSSO report, taking a student out of English learner status too soon might set him up for failure. But keeping him in too long “can limit educational opportunities, lower teacher expectations, and demoralize students.”

“Having uniformity on criteria is really important,” said Kenji Hakuta, a national expert on teaching second languages at Stanford University.

Another complication is that while states such as California, Texas, Florida, New York and Ohio have large populations of English learners, others have very few. H. Gary Cook, a research scientist with the Wisconsin Center for Education Research who co-authored the CCSSO report, said that 70 percent of the school districts in World-Class Instruction Design and Assessment, a consortium of 33 states working on English language learning issues for which he directs research, have fewer than 100 English learners.

Daniel Wiener, administrator of inclusive assessment in the Massachusetts Department of Elementary and Secondary Education, would like to see more consistency across state lines—but he doubts a common definition is attainable.

“There are laws about which tests can be translated, if any, how you get in to EL status, how you get out – it seems unlikely that we're all going to be able to come to agreement on all of this,” Wiener said.

Still, he said the conversations are worth having.

“It seems like a noble effort that will be useful but may not end up where we want it to end up.” 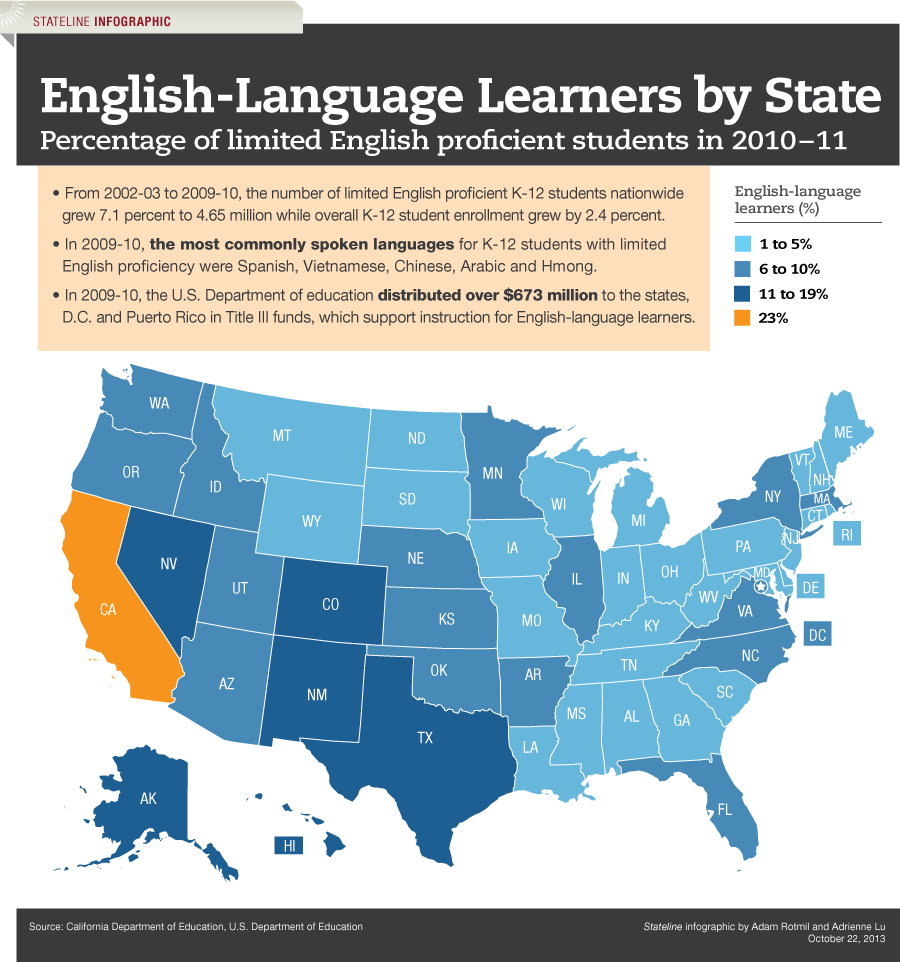