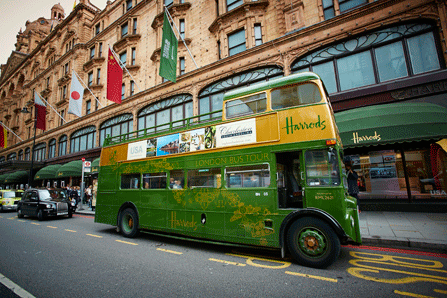 This ad ran in print and online media outlets throughout the U.K. to lure visitors to Florida. The campaign was a collaboration between Visit Florida and Brand USA, a federal initiative aimed at increasing tourism to the U.S. (Courtesy of Visit Florida)

Shoppers at London's famed Harrods department store saw something a bit unexpected this fall:  ads, videos and even a coveted display window promoting Charleston and the beaches of South Carolina. More of the same appeared on Harrods' green tour buses.

Both efforts are part of state tourism campaigns launched with the help of a federal initiative to attract foreign visitors. Called Brand USA, it's a nonprofit, public-private partnership created by legislation President Barack Obama signed in 2010 “to promote the United States to world travelers.”

The program is funded by the private sector, mostly the tourism-related industry, with matching federal funds of up to $100 million a year from a $10 fee that international travelers pay when they visit the U.S.

Last year, the first full year of operation, Brand USA received $60 million in private-sector funding. That more than doubled to $130 million this year.

The program promotes all 50 states on their various websites and in promotional material. States can supplement that support by sending in additional funding from state tourism organizations and local chambers of commerce to pay for targeted programs arranged by Brand USA, as Louisiana and South Carolina did.

“There's no better `Good Housekeeping' seal of approval for a quality product in the United Kingdom than Harrods department store,” he said. “They don't accept marketing partnerships with everyone coming through the door.”

His state was the first to work with Brand USA on its language content program, which provides materials in other languages, Dardenne said. He pointed to a two-minute video done in French, German and Spanish that appears on Brand USA's website, Travel South USA, and on LouisianaTravel.com.

The nonprofit Visit California also invested $9 million with Brand USA last year to promote the state. Half of that was in the form of “in-kind” contributions, such as digital images for the Brand USA website, and $4.5 million was in cash, according to Brian Wright, senior director of communications for Visit California.

Brand USA is the first national travel promotion program designed to attract more international travelers to the U.S. And now that the federal government shutdown is over, the program is working to make sure foreign visitors are aware that many of the prominent federal sites closed during the budget impasse have re-opened.

“We will be promoting the fact that America is open for business; the parks, the treasures are all waiting to be seen,” said Anne Madison, a Brand USA spokeswoman. “We already have so many things in the works to support the national parks that have not been launched yet,” she said. “The timing works really, really well.”

From Times Square to the Grand Canyon to Disney World and Hollywood, “tens of millions of tourists from all over the world come and visit America,” Obama said last year after signing an executive order aimed at increasing foreign tourism. “And the more folks who visit America, the more Americans we get back to work.”

As part of its national travel and tourism strategy, the Obama administration hopes to attract 100 million international visitors to the U.S by 2021, compared with 67 million in 2012. A 1 percent increase in tourists from Canada, Japan and the United Kingdom would add more than $500 million annually to the U.S. economy, according to Brand USA.

After the Sept. 11, 2001 terrorist attacks, the U.S. share of the international travel market fell to 11 percent in 2010, from 17 percent in 2000, figures show. The U.S. Travel Association, an advocacy organization for the travel industry, estimated in 2011 that the drop cost the country an estimated $606 billion in traveler spending and 467,000 jobs.

“The U.S. was, until recently, the only major country that didn't have a marketing arm to attract tourism. Brand USA was created to address this,” said Lucy Nashed, a spokeswoman for Republican Gov. Rick Perry of Texas. “Our focus is on encouraging travel to Texas from around the country and around the world, so Brand USA supports our efforts by marketing Texas.”

Brand USA calls its “Discover America” website the “official USA travel site.” Visitors to the site can't use it to make transportation or hotel reservations, but it has information on all 50 states and U.S. territories translated into seven languages—an effort not every state tourism department could afford. Brand USA's magazine “Inspiration Guide” is also in seven languages.

It has spent $2.6 million so far this year on advertising in Canada, $2 million in Japan, and $8.5 million in the U.K., featuring major destinations in the states.

Critics of the program, including some Republican congressmen, argue that taxpayer dollars shouldn't be spent promoting U.S. tourism. Will Seccombe, president of Visit Florida, the official consumer website of the Sunshine State, disagrees. “It's not U.S. taxpayer dollars,” he said, stressing that the federal contribution comes from international visitors.

States are especially interested in attracting the expanding middle and upper classes of the developing world. Tourists from countries such as Brazil, Russia, India and China tend to spend more than visitors from other nations.

This summer, Brand USA opened offices in Beijing and Shanghai and launched its gousa.cn website that promotes U.S. venues in Chinese.

It's not just big states such as Florida and California that benefit from Brand USA, supporters say. While sites such as Disney World and Broadway are the gateways that bring in foreign visitors, once they are here, Brand USA can point them to other venues.

For example, Loudoun County, Va., 25 miles from Washington, D.C., is using Brand USA to lure foreign visitors, particularly those from Germany. The draw is the wineries in Loudon County, which promotes itself as “D.C.'s Wine Country.” Some 55 flights a week from Munich and Frankfurt come into Dulles airport, located in Loudoun County.

“We know that we would not be the primary purpose for visiting the United States,” said Patrick Kaler, president of Visit Loudoun. “We hope to be an add-on.”