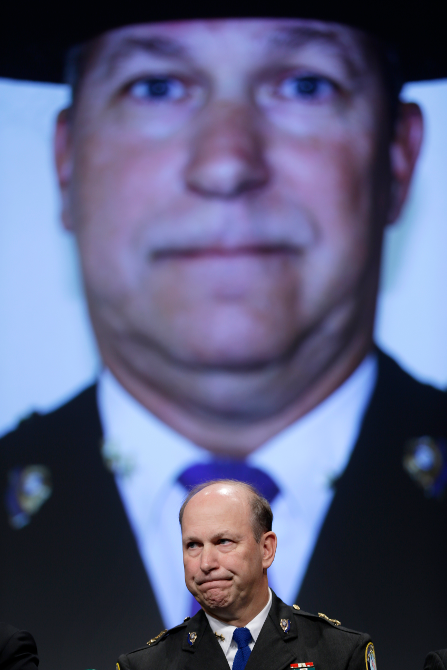 Newtown, Conn. Police Chief Michael Kehoe listens as he is honored at the International Association of Chiefs of Police annual conference Monday in Philadelphia. Attorney General Eric Holder told the group that local authorities, who are often the first responders to mass shootings, can play a vital role in ending them. (AP)

PHILADELPHIA—Making sure police officers have the tools to respond to mass shootings is a top priority, Attorney General Eric Holder said Monday.

“We've seen in the last year, it's almost always patrol officers who are responding to active shooters, not SWAT teams,” said Holder, referring to the mass shootings in Newtown, Conn., Aurora, Colo., and the Washington Navy Yard. Already this year, there have been 12 mass shootings, Holder told more than 1,000 state and local officers at the International Association of Chiefs of Police meeting.

The Department of Justice is developing guides for schools and churches to respond to active shooters and is already providing training for local officers on how to respond to such incidents.

“We strongly disagree with the recent decision not to challenge the marijuana laws in Washington and Colorado,” said Craig T. Steckler, association president and retired chief of the Fremont, Calif., police department, to spontaneous applause.

The Justice Department announced in August that it would allow state marijuana legalization to go forward and advised U.S. attorneys to prosecute marijuana users or businesses only if they were involved in trafficking or giving marijuana to minors.

“We are disappointed with the decision,” Steckler said. “We think we've opened the floodgates to people who want to fully legalize all drugs.”

“I don't think folks understand the coming impact of sequestration on the FBI and our partnerships with state and local law enforcement,” said Comey, who noted that those partnerships were essential during the Navy Yard shooting Sept. 16, his first day in his new position.