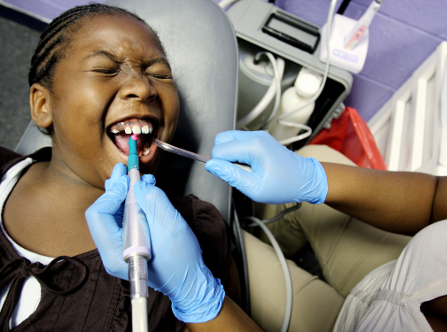 Heavenlea James, 9, gets her teeth cleaned at Christ Community Health Services in Memphis. Community health centers in states that decline to expand Medicaid under the Affordable Care Act stand to lose more than half a billion dollars in revenue in 2014. (AP)

Community health centers in states that have rejected Medicaid expansion under the Affordable Care Act will forgo more than half a billion dollars in new revenue in 2014, according to a new report from the George Washington University School of Public Health and Health Services.

States where the highest percentage of community health center patients have incomes below the federal poverty level:

The study for the first time quantifies the “spillover” effect of states' failure to expand Medicaid. In 2014, the study estimates, community health centers in the 25 states that have chosen to expand Medicaid will gain an estimated $2 billion in Medicaid money from newly eligible patients.  By contrast, the 25 states that have opted out will miss out on an estimated $555 million.

“Health centers in opt-out states can be expected to struggle, falling further behind their expansion state counterparts in terms of service capacity, number of patients served (both insured and uninsured), and in their ability to invest in initiatives that improve the quality and efficiency of health care,” the report states.

The nation's 1,128 federally-funded community health centers operate in more than 8,000 locations, and provided care to an estimated 20.2 million patients in 2011. Another 100 so-called “look alike” centers that receive state and local funding served another 1 million patients.  Nationally, 72 percent of all patients who receive care at health centers have family incomes below the federal poverty level, and 36 percent of them are uninsured.

Previous research has shown that when patients who frequent a health center become insured, the center's revenues increase. The new money may allow the center to serve more patients, add new services such as dental and mental health care, or expand to additional locations.

Without the new money, the study concludes, health centers in the non-expansion states will continue to struggle.

“It's a huge loss for the whole community” said Sara Rosenbaum, a lead author of the study, “Not just for the patients who are uninsured. The health centers doors are open to everyone.”

The mostly Southern states that have opted out of the Medicaid expansion have the nation's highest uninsured rates, lowest median incomes and poorest overall health.  Overburdened community health centers in those states serve the highest percentage of patients with incomes at or below the federal poverty level, which is $11,490 for an individual.

“The immediate spillover is revenue loss for the community, which translates into services and jobs,” Rosenbaum said. “But in the long term, in a whole swatch of the country, these are the health centers that are going to be held back in their ability to improve and expand.”

Neighbors Maryland and Virginia illustrate the point: In Maryland, which is expanding Medicaid, more than 39,000 health-center patients will gain Medicaid coverage, generating an estimated $33 million in revenue in 2014. In Virginia, which has opted not to expand Medicaid, health centers will forgo an estimated $17 million in revenues from 35,000 uninsured patients who would have qualified for expanded Medicaid.