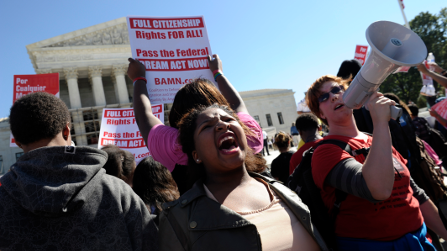 Nakia Wallace, center, a Cass Technical High School student in Detroit, and others demonstrate outside the Supreme Court in support of affirmative action. The court heard arguments on whether the University of Michigan can consider race in its admissions process. (AP)

The nation's highest court weighed affirmative action once again on Tuesday, this time hearing arguments about whether voters should be allowed to ban consideration of race and other factors in public education and public employment.

In 2006, 58 percent of voters in Michigan approved a ballot measure—known as Proposal 2—to ban the use of race, ethnicity, gender and other factors in college admissions and public employment and contracting.

Eight states ban the use of race in public college and university admissions—in addition to Michigan, they are Arizona, California, Florida, New Hampshire, Nebraska, Oklahoma and Washington.

In Schuette v. Coalition to Defend Affirmative Action, Michigan Solicitor General John J. Bursch argued that Michigan's constitutional amendment represents the desire of the people of Michigan “to move past the day when we're only focused on race.”

Bursch said that while the benefits of diversity were not in dispute, the University of Michigan could use tactics other than affirmative action to improve diversity on campus, such as eliminating preferences for children of alumni and seeking out socioeconomic diversity.

Justice Sonia Sotomayor questioned Bursch about the impact of Proposal 2 on diversity on campus. Bursch said the number of underrepresented minorities dipped slightly in the first year after the change, but he said it is difficult to assess the impact in subsequent years because the university now allows students to select more than one race. Bursch said that in California, which banned affirmative action through Proposition 209, the number of underrepresented minorities increased at 16 of 17 public college campuses along with graduation rates for those students.

Sotomayor said the Supreme Court places a high bar for racially-based policies, but “What you're saying is if all those other measures fail, you're by constitution saying you can't go to the remedy that might work.”

Mark D. Rosenbaum, a lawyer for the American Civil Liberties Union which opposes the ban, said that under Michigan's policy, minority applicants seeking to change the admissions process face a higher hurdle than other groups because they must amend the constitution in order to even discuss race. On the other hand, applicants who seek special consideration because of geography or alumni connections, for example, can make their arguments without any special burden, Rosenbaum said, leading to separate and not equal playbooks for applicants.

The 6th U.S. Circuit Court of Appeals previously ruled Michigan's amendment, as it applies to higher education, unconstitutional. The appeals court said the ban made it harder for minority applicants to seek the consideration of race in admissions while applicants seeking for other factors to be considered could do so more easily.

A number of the justices, including Chief Justice John Roberts and Antonin Scalia, asked questions that seemed to hint that they approved of the approach of banning racial preferences altogether. Justice Elena Kagan recused herself.

Ada Meloy, general counsel for the American Council on Education, which filed an amicus brief with the group opposed to the Michigan ban, said it is difficult to say whether a ruling would impact affirmative action bans in other states.

“The bans in other states are not all constitutional amendments and they have different terminology involved, so we don't know whether it will have an impact beyond the state of Michigan at this point,” Meloy said.

Among the states that could be impacted is California, where voters approved Proposition 209 in 1996.

In June, the Supreme Court sent another highly-anticipated affirmative action case, Fisher v. University of Texas at Austin, back to a lower court, directing it to review the case by a tougher legal standard to determine whether race can be used in college admissions. At the time, the court seemed to support the broader objective of creating a diverse student body but warned that race should only be considered when no “race-neutral alternatives” would work.

Fisher represented the top court's first major affirmative action case since 2003, when the court allowed the University of Michigan Law School to consider race as a factor in admissions for individual applicants but ruled against an admissions policy at the University of Michigan's undergraduate level that gave minority students additional points.