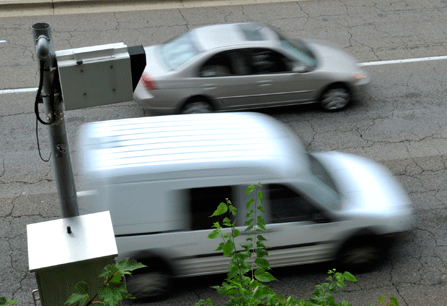 Traffic moves past a red-light camera in Knoxville, Tenn. Red-light cameras reduce traffic accidents, at least on some corners. But critics say they are mostly designed to generate millions of dollars in revenue for cities and states. (AP)

Florida drivers who were caught by red-light cameras paid more than $100 million in traffic fines last year. But whether the cameras made Florida's roads safer—or just swelled state and city coffers—is an open question.

“Three years ago, these red-light cameras were pitched as safety devices,” said state Sen. Jeff Brandes, a St. Petersburg Republican who has proposed a state ban on the cameras. “Instead, they've been a backdoor tax increase.”

A 2012 audit in St. Petersburg showed the number of dangerous side-impact collisions did decrease at intersections where the red-light cameras had been installed. However, rear-end collisions actually increased at those intersections, as more drivers stopped short to avoid violations.

In addition to identifying drivers who run through a red light, the cameras tag those who fail to come to a full and complete stop before turning right on red.

Communities in 24 states and the District of Columbia have at least one red-light camera, according to the Governors Highway Safety Association.  The Insurance Institute of Highway Safety recently counted more than 500 communities with the cameras.

Overall, people like them: In a 2011 poll conducted by the insurance institute, two-thirds of drivers in 14 big cities with cameras expressed support for them.  And last November, voters in Longview, Wash., and Pohatcong, N.J., rejected ballot measures to remove the cameras.

Cameras that catch drivers who violate red-light laws are far more popular than cameras that catch speeders. Only eight states and the District of Columbia use speeding cameras, and a dozen states have enacted laws banning them.

Nevertheless, resistance to red-light cameras may be growing. Nine states already prohibit them, and lawmakers in Ohio are considering a ban, even though the cameras generated $16 million for Ohio cities last year.

Lawmakers in Iowa, New Jersey and Colorado also considered turning off the cameras this year, though those efforts fell short.

“The state shouldn't be counting on people to violate laws in order to pad their budgets,” Brandes said.

One of the main stumbling blocks in the states that considered and rejected bans this year was opposition from cities receiving money from them. Tickets generally cost drivers about $100, according to data from the Governors Highway Safety Association. California has the nation's highest red-light fine at $490 per violation.

“They are used to having that money in their budget,” said Iowa state Rep. Walt Rogers, a Republican who has tried for the last two years to pass legislation to limit the cameras. Last year, his proposal to require a traffic study at an intersection before installing a red-light camera failed to get out of committee. His ban bill made it out of the House in 2012, but died in the Senate.

State legislation typically sets the ground rules for the use of the cameras, and then cities negotiate the specifics of the deal with the camera vendors. The vendors, which include American Traffic Solutions and Redflex Traffic Systems, install the cameras and generally charge communities a flat fee for camera rental each month. Texas mandates flat-fee contracts to avoid encouraging ticket-writing.

At an intersection with a camera, sensors in the road cue the cameras whenever a violation occurs. The camera shoots video of the offender and sends it to analysts at the camera company for closer examination. If the analysts think the situation merits a ticket, they forward the video to local law enforcement agents, who review it again. Law enforcement officers have the final say about whether or not a driver receives a ticket.

Some states limit where any excess revenue generated from the program can go. In Texas, for example, any revenue in excess of what it costs cities to run the program goes to trauma care centers that treat car crash victims and local transportation expenses. In Pennsylvania, the excess money is sent back to the state transportation department, which then parcels the money into competitive traffic safety grants for cities.

The rest of the money went to cities' general funds and to traffic camera vendors.

“If the state needs additional tax revenue, the legislature needs to be fair and honest about how it gets that revenue,” said Brandes.

He and other opponents say the diversion of camera revenue into general state and city budget coffers is proof the programs are about money, not safety. In a policy paper from the Transportation Research Board at the National Academy of Sciences, researchers recommended that camera revenues be used exclusively for transportation projects.

The International Association of Chiefs of Police recommends the same thing. “Red-light cameras should be implemented only to benefit public safety,” Richard Ashton of the group recently wrote in Police Chief magazine. “Unfortunately, too many jurisdictions have obtained red-light cameras to generate revenue.”

Still, it's not as though everyone is getting the tickets, said Charles Territo, spokesperson for American Traffic Solutions. “There are any number of excuses individuals will use to explain why they break the law,” said Territo.  “But at the end of the day, there is no revenue generated from red-light safety cameras if drivers obey the law and stop on red.”

Safety Depends on the Corner

The National Highway Traffic Safety Administration has found that intersections with red-light cameras have fewer severe collisions, such as “T-bone collisions” in which a driver or passenger takes the full impact of an oncoming car.

But new research from the Texas A&M Transportation Institute shows that red-light cameras do not reduce all kinds of accidents in every location. After studying 254 intersections in 32 Texas towns, researchers observed that when cameras were placed at intersections where drivers frequently ran through red lights, the number of serious crashes declined by up to one-third. But there was an increase in dangerous rear-end collisions.

Meanwhile, at intersections where red-light violations were infrequent, installing cameras just increased rear-end collisions, without reducing the number of other kinds of accidents.

A seven-year study of red-light cameras in six communities in northern Virginia found similar results: collisions that occurred because drivers ran red lights were down by about 42 percent in all six areas, but the cameras caused a 27 percent increase in rear-end collisions. The increase in rear-end collisions meant that the actual total number of crashes went up during the seven years.

Instead of cameras, some advocate longer yellow lights, which would give drivers more time to slow down and not have to make a snap decision about whether or not to accelerate through an intersection. Increasing the length of a yellow light by even a half-second can dramatically decrease the number of crashes at an intersection, according to researchers at Virginia Tech.