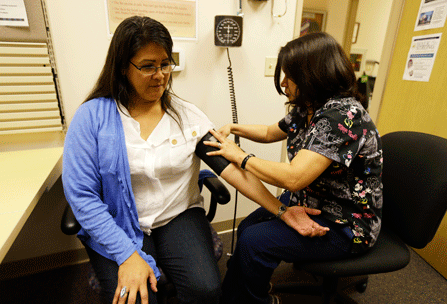 For most uninsured Americans, the motivation for checking out the health insurance exchanges is simple – they could face stiff penalties if they don't sign up. For Native Americans, the decision is more complicated.

Longstanding treaties with the federal government guarantee all Native Americans free health care. As a result, the Affordable Care Act exempts them from paying a penalty if they choose not to purchase insurance. More than 2 million Native Americans receive free health care at federally supported Indian health facilities. Many others receive care from tribal facilities and urban Indian organizations.

So why would an American Indian or Alaska Native sign up for reduced-rate insurance on the exchanges?

Indian health advocates said the benefits are many. “It's an unprecedented opportunity,” said Roxane Spruce Bly, who is working with New Mexico's health insurance exchange to provide outreach to Native Americans. “It's the biggest thing to happen in Indian health in my lifetime. It solves so many problems for Indian people.”

Although tribal members are entitled to free health care, most Indian health facilities do not offer a full array of services. When patients need major surgery or cancer treatments, for example, they are referred to specialists outside of Indian lands. At least two-thirds of those referral claims are rejected, Bly said. That puts Indians at risk of either paying major medical bills themselves or doing without needed treatments. In addition, about half of Native Americans live in urban areas that are great distances from tribal health facilities.

As a group, the nation's 5.2 million Native Americans have poorer health and less access to health care than the rest of the U.S. population. Their uninsured rate is nearly 30 percent, compared to 15 percent for the country as a whole. And nearly half of all Indians have incomes low enough to qualify for Medicaid in states that have chosen to expand coverage, according to the Center on Budget and Policy Priorities. More than 1 million Native Americans are already enrolled in Medicaid.

Still, Bly and others said the idea of purchasing health insurance, even if deeply discounted, is a foreign concept for most tribal members. Even optimistic advocates for Indian enrollment in the exchanges said convincing tribal leaders and individuals to sign up could take years. Bly's goal is to sign up 10 percent of New Mexico's eligible Native Americans by the end of 2014.

The ACA includes provisions for American Indians and Native Alaskans that make purchasing insurance on the exchange an even better proposition than it is for everyone else. They can sign up at any time – there are no open enrollment deadlines. Tribal members with incomes below 300 percent of the federal poverty level ($34,470 for an individual) are exempt from paying deductibles and copays, so they can purchase the cheapest plans without worrying about out-of-pocket expenses. All tribal members, no matter what income level, are exempt from out-of-pocket payments if they receive services from Indian health facilities. And unlike employers, tribes can pay exchange premiums for their members without paying taxes.

In addition, a separate law that has governed Native American health care for decades – the Indian Health Care Improvement Act – was amended when the ACA was signed. New provisions make it easier for Indian health facilities to accept payments from other insurers, including Medicaid, Medicare and private insurance. The new law also expands the types of services the facilities can offer and requires inclusion of behavioral health and substance abuse treatments.

For Indians enrolled in Medicaid, Indian health providers receive a fee-for-service that is much higher than other providers receive. In addition, they can collect fees from private insurers if Native Americans take advantage of the exchanges.

The new income sources are expected to help Indian health facilities expand and improve their services. Some, for example, do not now include dentistry or deliver babies. Few offer preventive services. According to a 2011 Centers for Medicare and Medicaid (CMS) report, the Indian Health Service budget—$4.2 billion in 2010—“is only sufficient to provide about half the necessary health services required.”

Ed Fox, a member of a tribal advisory group to the CMS, estimates the ACA could result in as much as $4 billion in additional revenue for Indian health services. But that's only if tribal leaders take advantage of it, he said.

A tribal member himself, Fox conducts outreach meetings with tribal leaders in Washington state. He said so far the leaders he's talked with plan to wait and see what other tribes do about the health insurance exchanges before they make a decision.

“They haven't had the greatest experience with government programs in the past,” Fox said. If he walks into a meeting and says, “I'm with the federal government and I'm here to help you,” most tribal leaders simply laugh.

In states that expand Medicaid in January, enrolling newly eligible Native Americans will be less of a challenge than selling the exchange concept. But it will still take substantial state and federal outreach and education, an effort that is required by the ACA.

According to a report from the Government Accountability Office, Native American enrollment in Medicaid could double under the expansion.

But the GAO said the CMS and the Indian Health Service are not doing enough to spread the word about health insurance exchanges and new Medicaid coverage. States are also responsible for getting the word out.

In New Mexico, Medicaid director Julie Weinberg said members of her staff have been crisscrossing the sparsely populated state since August and have visited more than 200 tribal locations. The agency has also purchased radio, print and television ads. “It ends up being fairly costly,” Weinberg said. “We're digging way down deep into our administrative budget to do the outreach.”

Montana and California have received a federal Medicaid waiver to directly reimburse tribal leaders for Medicaid expansion outreach efforts.  Alaska and Washington have pending waiver requests, and three other states are interested, according to the GAO report.

“The most important thing for state administrators,” said Carolyn Ingram of the Center for Health Care Strategies, “is to talk to tribes early and often.” She and others agree that most individual Native Americans are not likely to take full advantage of the health law without the support of their tribal elders.