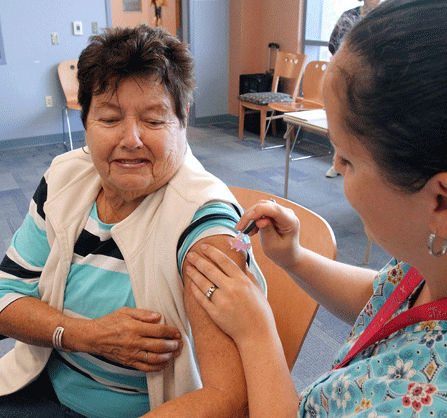 Louise Hannings , left, receives a flu shot from Kelly Frame, a public health nurse with the Cape May County Health Department, at a senior center in New Jersey. State health officials are concerned that the federal shutdown will harm the fight against the flu. (AP)

This week more than 11,000 U.S. Muslims are expected to join millions of other pilgrims in Mecca for the annual Hajj pilgrimage. When the Americans return home, the Centers for Disease Control and Prevention and state and local health departments will be watching for any sign of the MERS virus that has caused severe acute respiratory illness in 140 people since 2012, killing about half of them.

But because of the shutdown of the federal government, about 9,000 of the CDC's 15,000 workers have been furloughed. James Blumenstock, chief of public health practice for the Association of State and Territorial Health Officials, said states are concerned that the absence of those workers might slow down identification and response to MERS cases if the virus spreads to the U.S.

Since the shutdown, the CDC's bi-weekly conference calls with state health officials to share new information about MERS and other emerging global threats have stopped, Blumenstock said. “Since Oct. 1, we have not scheduled one or had the opportunity to talk to anyone about scheduling the next one.”

MERS is just one of many possible public health risks state health officials are worried about handling without the full support of the CDC and other federal agencies. Another big one within U.S. borders is the flu season that began Oct. 1.

In a Wednesday conference call with state health officials from across the country, CDC Director Tom Frieden assured states that the agency would be available to assist in emergency situations, but acknowledged that its response might be slower because of the shutdown.

“We have been told that that if we needed support for a large-scale event, it would require pulling staff back in, and that the response time could be delayed,” said Wendy Braund, Wyoming's state health officer. “That is a very real concern to us.”

CDC in the States

States rely on the CDC to step in when outbreaks cross state lines and for technical support and lab testing when unusual situations arise. The federal agency also helps fund and staff a range of programs, embedding its own experts in state health agencies to help with a range of programs from immunizations to AIDS prevention. Many of these people have been furloughed.

Also, certain public health functions rely heavily on federal grants, which will become more critical if the shutdown continues. Hawaii State Epidemiologist Sarah Park was handling multiple investigations when she learned that her work may be interrupted because her division gets 90 percent of its money from the federal government.

“Basically, toward the end of last week, it was realized that … the state had only sufficient federal funds drawn down to make the Oct 5th payroll," she said in an email.

“If the federal shutdown doesn't resolve soon,” she said, “we could be facing a major crisis whether because staff have to be laid off and/or because we aren't able to place vaccine orders or have them completed because the federal system is down.”

CDC officials acknowledged the challenges the shutdown has created for its partners at the state level. “We're actually really concerned about what is happening with the states, and down the road if this continues,” said John O'Connor of the CDC's National Center for Emerging and Zoonotic Infectious Diseases.

The CDC can call back employees to respond to emergencies, according to Barbara Reynolds, a CDC crisis communication specialist. For example, the U.S. Department of Agriculture on Monday issued a public health alert for an outbreak of an antibiotic-resistant strain of salmonella linked to chicken produced by Foster Farms in California. The outbreak has sickened 278 consumers in 17 states. In response, the CDC called back two-thirds of the 30-person team that tracks foodborne illnesses. It has updated its website with details of its ongoing investigation into the outbreak, including a map detailing cases by state.

Still, Reynolds acknowledged it's not the same as when the CDC is fully functioning. "We have 9,000 people from CDC furloughed, which means 9,000 fewer people to answer the phones and take phone calls from people in state agencies,” she  said. “Some of that collaboration is just gone right now."

In Oregon, eight salmonella cases have been linked to the outbreak. Katrina Hedberg, the state's chief epidemiologist and health officer, said the CDC's national databases connected the salmonella strain to Foster Farms based on evidence from cases in other states. “Looking at our Oregon cases, it wouldn't be obvious that they were linked,” she said.

But the state received less information than it would have from a fully functioning CDC. “Normally we'd be hearing about this before, and we'd be having conference calls beforehand,” she said. Instead, Hedberg said the general public learned about the outbreak only shortly after she and her staff did – and from the USDA's Food Safety and Inspection Service rather than the CDC.

One of the most significant looming public health threats is the flu. State health officials are concerned about how the shutdown will affect their ability to fight its spread, since they rely on the CDC to track and monitor cases to better prepare their public health response.

Michael Cooper, Alaska's deputy state epidemiologist, said his department has received “a flurry of emails about how CDC influenza monitoring and surveillance staff would be at minimal levels and online applications might not be functional for recording data that demonstrates national/state activity related to influenza.”

Blumenstock, of the Association of State and Territorial Health Officials, said there are critical flu-related functions the CDC cannot currently perform because of the shutdown.

For example, at this point in the season, the CDC typically tests early flu strains to see how well they match with the seasonal vaccine. That information gives public health officials important clues about what to expect from flu season and how to adjust their strategies. The CDC also conducts an annual public awareness campaign, tests early cases of the flu to determine resistance to antivirals and provides regular surveillance information to states.

Much of that assistance simply isn't happening, Blumenstock said. “Depending on how bad flu season turns out to be, that could provide increased risk of illness or death if CDC doesn't get back in business.”