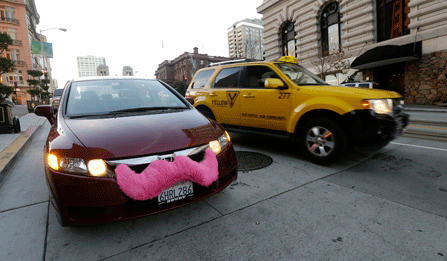 Lyft driver Nancy Tcheou waits in her car after dropping off a passenger as a taxi cab passes her in San Francisco in January 2013. Internet-enabled ridesharing services such as Lyft, Uber and Sidecar are challenging the business models of regulated taxi and limousine companies, and state regulators are being asked to referee the disputes. (AP)

Companies that let people use their smartphones to find rides have racked up several recent victories with state regulators, despite intense opposition from taxi and limousine companies.

Outfits such as Uber, Lyft and Sidecar all have sprung up in the last four years, and now operate in cities as far-flung as Honolulu and Berlin.  Using the apps, customers can pick what kind of car they want, ensure that drivers will take them to their destination and pay drivers (including tip) with their phones, instead of using a physical credit card or cash.

California, where all three companies are based, has gone the furthest of any state, approving regulations last month specifically tailored to those companies.

The new rules from the state's Public Utilities Commission are widely seen as a victory for the upstart companies. Indeed, they represent a remarkable turnaround from an agency that had issued cease-and-desist letters to the companies just last year.

Sidecar called the commission's action “a landmark decision that gives rideshare the green light once and for all.” The new rules, the company added, “will pave the way for transportation innovation nationwide.”

Under the new California rules, the companies must insure their drivers, train and perform criminal background checks on drivers, enforce a zero-tolerance policy for intoxicated drivers, monitor drivers' traffic offenses and ensure that drivers have their vehicles inspected every year.

As ridesharing apps grow in popularity, other states also are stepping in to regulate the nascent industry:

Despite its victories in some states, the app-based ride-hailing companies still face stiff resistance in many cities, including New York, Philadelphia and Austin. The International Association of Transportation Regulators has supported local efforts to “curb the unsafe, unregulated expansion of rogue car service apps.”

Taxi and limousine companies argue it is unfair for Uber and its competitors to sidestep local rules that ensure passengers travel in safe vehicles, are ferried by qualified drivers and are covered by insurance in case of an accident.

Alfred LaGasse, who heads the Taxicab, Limousine and Paratransit Association, questioned whether California's new regulations will keep passengers safe and protect them against discrimination. Companies such as Uber and Lyft target affluent customers with smartphones and credit cards, LaGasse said. He noted that while taxi services must serve poor, elderly and disabled passengers, Uber and Lyft generally do not use vehicles equipped for disabled passengers.

One of the key questions for regulators is whether Uber, Lyft, Sidecar and similar outfits provide technology or transportation services. If they are transportation companies, they must obey more stringent rules for cabs or limousines. Even in their California victory, car-hailing businesses suffered setbacks on that key legal question.

Lyft and Sidecar claim they are ridesharing applications, the digital equivalents of a break-room bulletin board that brings together strangers who want to carpool. The companies actively promote the informal vibe: Passengers of both services sit in the front seat with the driver. Lyft drivers, who adorn their cars with pink mustaches, greet passengers with a fist bump. Although the companies suggest how much passengers should pay drivers, they say any payment is voluntary.

But California regulators did not buy the theory that the services amount to digital carpooling. The commissioners determined that because the companies benefit financially and offer prearranged rides, they can be regulated by the Public Utilities Commission.

The officials went a step further with Uber, because of how it runs its main service for hailing black sedans. Uber drivers do not use their own cars; they are off-duty limousine drivers who use commercial vehicles to shuttle passengers while they are off the clock with their primary employer.

The commission said it would look into whether Uber should be regulated like a limousine company later. (The commission also determined that UberX, the company's low-cost ridesharing program, falls under the same rules as Lyft and Sidecar.) The commissioners also rejected Uber's argument that it provides technology rather than transportation. The company says it links customers with a service, like a restaurant reservation app.

“Uber by its name alone is selling a type of car service,” the commissioners wrote.  “Because Uber is profiting from this service, it should be held responsible if the driver is negligent or not applying Uber safe practices.”

California regulators expressed concerns that existing insurance coverage for the companies is inadequate. They singled out Uber, because it relies on its limo drivers' existing commercial coverage to cover potential claims. The problem is that insurance companies could deny claims for accidents that occur while the driver is working for Uber rather than a limousine company, the regulators said.

“Until this decision becomes effective, there is a real possibility that parties suffering losses in an incident would find there is no insurance available to cover their potential claim,” the regulators wrote.

Drivers relying on personal coverage also might not be covered. Geico recently denied coverage for a Lyft driver involved in an accident with a Yellow Cab taxi in San Francisco, said a spokesman for the Taxicab, Limousine and Paratransit Association.

LaGasse, the group's CEO, said the new companies have avoided more regulation because they are heavily backed by allies on Wall Street and Silicon Valley. He predicted the public will demand changes to the industry as it matures.