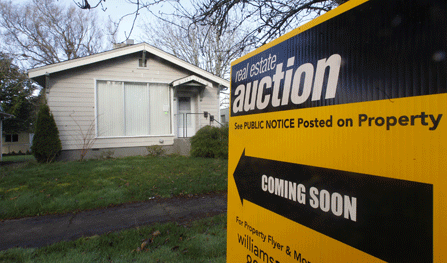 An auction sign in front of a home in Salem, Ore. Foreclosure starts in the state increased more than 250 percent in the third quarter. During the same period, Kentucky had the largest increase in the number of bank repossessions of foreclosed homes, with 67 percent. (AP)

The number of U.S. homes entering the foreclosure process hit a seven-year low between July and September, but bank repossessions were up 7 percent from the previous quarter, with Kentucky seeing the biggest jump, up nearly 70 percent, new data show.

Even with its sharp increase in repossessions, Kentucky's overall foreclosure rate—which includes default notices, scheduled auctions and bank repossessions—ranked 36th among the states in the third quarter, according to a new data released Thursday (Oct. 10) from RealtyTrac, which follows real estate trends.

Daren Blomquist, vice president at RealtyTrac, figures that that now that Kentucky's housing market is recovering, lenders are finally clearing out some of the properties that started the foreclosure process a year or two ago.  “Some of those are finally being foreclosed and repossessed by the banks,” he said.

Nationwide, more than 119,000 properties were repossessed by lenders in the third quarter, putting the nation on pace for close to half a million total bank repossessions for the year, RealtyTrac said.

Maryland's foreclosure starts increased 259 percent in the third quarter, helping to boost the state's overall foreclosure rate to third highest among the states.

Nationwide, the number of U.S. homes entering the foreclosure process during the July to September quarter totaled more than 174,000, a 13 percent decline from the previous quarter and a 39 percent decrease from a year ago, the lowest level since the second quarter of 2006, RealtyTrac said.

“While foreclosures are clearly becoming fewer and farther between in most markets, the increasing time it takes to foreclose is holding back a more robust and sustainable recovery,” Blomquist said. 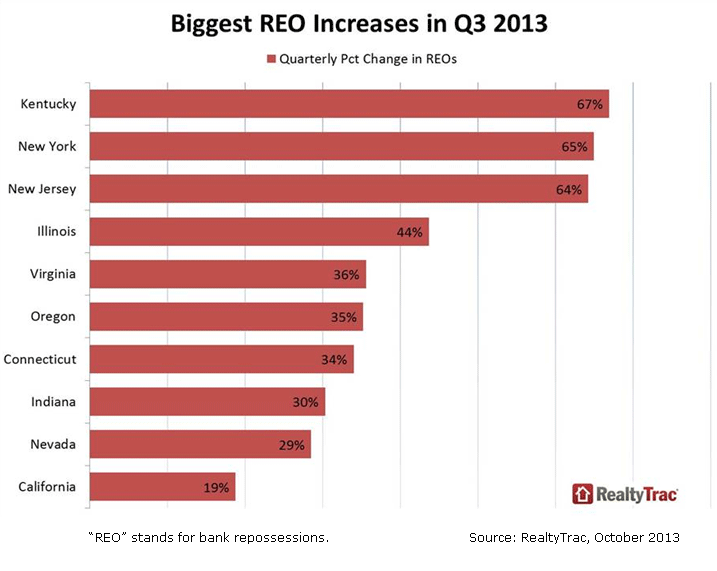