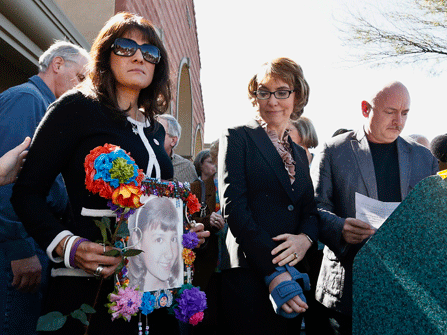 Former U.S. Rep. Gabrielle Giffords of Arizona, center, looks at a photo of Christina-Taylor Green. A man who may have been psychotic shot Giffords and 18 others in a Tucson mall parking lot in January 2011, killing six people, including 9-year-old Christina. Maryland recently opened a new center that aims to identify and treat people at risk of psychosis. (AP)

Maryland was one of several states that reacted to last year's mass shooting at a Newtown, Conn., school by boosting mental health spending or tightening gun control laws for people with severe mental illness.

Unlike the other states, Maryland also is focusing directly on psychosis, the specific symptom that makes violence more likely.

The Maryland General Assembly this year approved Democratic Gov. Martin O'Malley's $1.2 million request to establish a “Center for Excellence on Early Intervention for Serious Mental Illness.” The program is aimed at identifying young people between the ages of 12 and 30 who are either in full psychosis or at high risk for becoming so, and getting them into immediate treatment.

The hope is that the program will contribute to a better understanding of psychosis, what triggers it, and how to treat it. Most of all, it is an effort to intervene as early as possible, to perhaps salvage lives that might otherwise be lost.

“There's a lot of evidence to suggest that the sooner a person with psychosis gets into treatment, the better the outcome for that person's well-being, for that person's chances of living and working in the community, for them living the life they want to live,” said Jason Schiffman, a psychologist at the University of Maryland/Baltimore County and a member of the new center's staff.

The unusual aspect of the initiative is that it doesn't target a particular illness—for example, depression, bipolar disorder or schizophrenia—but a symptom associated with those diseases in their most extreme form. Most studies show that in general the mentally ill are no more likely to commit acts of violence than the general population. But the probability that people with mental illness will become violent increases significantly if they reach psychosis, particularly if they are also abusing drugs.

This year, Maryland was one of a handful of states—California, Illinois, Oregon, South Carolina and Texas were the others—that managed to scrape together additional resources for mental health. They bucked a national trend: Between 2009 and 2012, state mental health spending shrunk by a total of $4.35 billion, according to the National Association of State Mental Health Program Directors. The states that spent more money typically added psychiatric beds, trained police to help them navigate crises involving the mentally ill, and bolstered psychological services in schools.

Maryland went further by creating the center. It owes its existence to the massacre at Sandy Hook Elementary School in Newtown, where 20 first-graders and six educators were gunned down. Robert W. Buchanan, a professor of psychiatry at the University of Maryland School of Medicine and the director of the center, said it had been in the planning stages since 2011, but had no funding. After Sandy Hook, O'Malley introduced a series of gun control measures in the General Assembly and asked his Department of Health and Mental Hygiene for recommendations pertaining specifically to mental health. Soon after, state lawmakers approved money for the center.

While details are far from complete, mental illness seems to have been a factor in several recent mass killings. Evidence suggests, for example, that the shooters at Virginia Tech, the Tucson shopping mall, and the Washington Navy Yard last month may have had delusions or hallucinations, which are suggestive of psychosis. Last week's incident in Washington, D.C., in which a young mother was shot to death after trying to drive through a barricade near the White House, also may have involved psychosis. Authorities said they found antipsychotic medication at the Connecticut home of the woman.

Psychosis is defined in medical terms as a lack of contact with reality, usually including false beliefs about what is actually taking place or hearing or seeing things that aren't there. Although it is commonly ascribed to those with schizophrenia and related disorders, people with untreated forms of depression or bipolar disease may also exhibit psychosis. Drug and alcohol abuse, dementia and other diseases also can cause psychosis.

The center will operate on several fronts, Buchanan said. One is to increase outreach to schools, family organizations, pediatricians and others involved with young people to acquaint them with the symptoms that someone with a high risk for developing psychosis may have, and to direct them to the center for help. Another is to expand two clinics—one in Baltimore and the other just outside the city—dedicated to the diagnosis and treatment of people at high risk for psychosis or those experiencing the first episode of psychosis. The center also will establish telemedicine links to remote parts of Maryland to pass on best practices and to consult on individual cases.

It is a tricky business trying to determine who might develop psychosis. Children do not generally have schizophrenia or related disorders, let alone full-blown psychosis. The outbreak of those diseases usually occurs later in life, generally in the late teens and early twenties. But Schiffman and other experts said that symptoms present in childhood may make a person a high risk for developing psychosis later.

“The person may say that the passage of time feels faster or slower than usual,” said Schiffman. “Familiar surroundings can seem strange confusing or unreal. They might say they've heard things others can't hear like people whispering or talking. They might say they mistake shadows for people or noises for voices. They might report seeing things on TV or reading in the newspaper that they think has special meaning to them. They often pick up hidden threats or putdowns in what people say or do. Some say they sometimes use words in unusual ways.”

Some of these people might be on their way to full-blown psychosis without intervention, and others may never develop psychosis. Either way, Schiffman said, they need mental health help and the earlier the better.

Those associated with the new center do not promise an immediate solution to the violent attacks that inspired the initiative in the first place. “But we can have an impact on the amount of violent and self-injurious behavior that people in these psychotic and pre-psychotic states have,” said Buchanan. And perhaps, those people and the families who love them might be spared the ravages of the most extreme forms of mental illness.