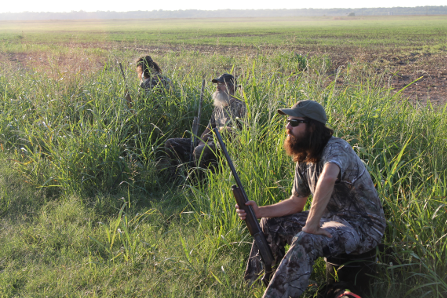 Phil Robertson, Si Robertson, and Jase Robertson in "Duck Dynasty," a show about a family that makes duck hunting equipment and calls. Hunters are upset the federal shutdown has thrown them off public lands during hunting season. (AP)

As hunters gear up for the fall season, governors are trying to help sportsmen pursue their prey, even on federal lands that are shut down. Essential question: How do you close the Mississippi River or the Alaska wilds? Answer: You really can't.

But the federal government can block access to rivers and lands. Some governors are suggesting that hunters seek their prey on state lands or private areas. In most states, hunting licenses for this season already have been issued by the states, so it's not an issue of revenue loss. But hunters are pretty upset about the closures and community businesses are losing out.

The National Shooting Sports Foundation says hunters and anglers spent $38.3 billion in 2011 on equipment, travel and more, as well as $11.8 billion in fees, mostly licenses, most of which goes to states.

Seven sportsmen's organizations joined a conference call this week to protest the shutdown and discuss what to do.  Almost 35 million Americans hunt or fish, according to the U.S. Fish and Wildlife Service – more than half of them on federal lands at some point in their lives. Four federal agencies administer 609 million acres of land, most of it in the western states.

“If you are a hunter, the beginning of October is prime time,” said Whit Fosburgh, president and CEO of the Theodore Roosevelt Conservation Partnership (Motto: “Guaranteeing You a Place to Hunt and Fish”). Fosburgh was on the call.

In Wisconsin, Gov. Scott Walker ordered the state Department of Natural Resources to remove barriers to a boat launch access to the Mississippi put up by federal officials. His reasoning, according to Wisconsin Natural Resources Secretary Cathy Stepp, is that the river access, along with the parkland that abuts the waterway, is funded 18 percent by the state and the rest by the federal government. That gives the state a say.

“It's duck hunting season coming up, we've got the migratory birds flying over,” Stepp said. “If we are able to fill the gap, the governor said, let's do it. Eighteen percent – that's a lot of money. We stand to lose tremendously more if we shut the park.

“I don't know how you close off a forest or how you barricade the Mississippi.”

She said hunting season means family time for many Wisconsin residents. While it's not exactly “Duck Dynasty,” the reality television show about a family of Louisiana hunters in the duck decoy and duck call business, it's a tradition. She noted that deer season is coming up and the questions she is getting from hunters are about, “Will I be able to go to my favorite traditional spot? These are lifelong family events for many people.”

A National Park Service official said closing the boat ramp came about as a result of a “misunderstanding” about how much control the state of Wisconsin has over the access, which, according to local officials, is more like a wide spot in the trees.

Patricia Trap, Midwest deputy regional director of the National Park Service, said the federal agency values its partnership with Wisconsin. “If this was a boat launch on the Mississippi, it likely would have been the Mississippi National River and Recreation Area and there are a lot of other partners and places that access to the Mississippi, not just ours,” she said.

She said closing federal lands overall is challenging: “In many parks you will see a barricade along a road that might lead down to a boat launch on federal property.” She said a deeper concern is that hunters or other recreational users of the waterway will require assistance and there will be few officers on federal territory to help.

“A lot of our rangers that are at work like those on the St. Croix National Scenic Riverway (in Wisconsin) are really first responders in any emergency. We are really thinned staffed and worried about public safety. You can't close the Mississippi,” Trap said.

Alaska Gov. Sean Parnell doesn't think you can close the 225 million acres of federal land that make up 60 percent of his state either. He wrote federal Interior Secretary Sally Jewell and demanded access to the lands for hunters, fishermen and recreational users. He cited federal laws, including the Alaska National Interest Lands Conservation Act, that say federal lands and waters are to be open and accessible without fees or permits.

“Whether it's for hunting, fishing, or subsistence, Alaskans' access opportunities cannot lawfully be curtailed due to a federal government shutdown,” Parnell said in a statement. “We will fight to ensure our people have rightful access to federal lands during the shutdown.”

Local news reports said wilderness guides had been advised they cannot lead treks into the lands during the shutdown. Larry Bell, acting director for the Fish and Wildlife Service in Alaska, told the Fairbanks Daily News-Miner that the closure was made according to the agency's contingency plan.

Bill Horn, director of federal affairs for the U.S. Sportsmen's Alliance and a former assistant secretary of the Interior in the Reagan administration, called the federal response to the shutdown of federal lands “haphazard to say the least.” In Alaska, he pointed out, there are multimillion-acre parcels of land  “accessible by float plane but are suddenly ‘closed.'”

In Florida, where Horn was visiting this week, “We have this big wedge of water called Florida Bay” in Everglades National Park. “The bay is ‘closed.' You can't go fishing in the bay. But there are no boundary signs in the bay, you don't know when you're in the park or out of the park. There are no buoys. It's theater of the absurd. You go up there in a boat, there's no gate.”

In the Big Cypress National Preserve, hunting season is scheduled to open up in a few days, he noted, for white tail deer, black bear and duck. The seasons are set by the state of Florida and licenses have been issued. “You don't have to go through a gate, you just have to have a hunting license,” he said.