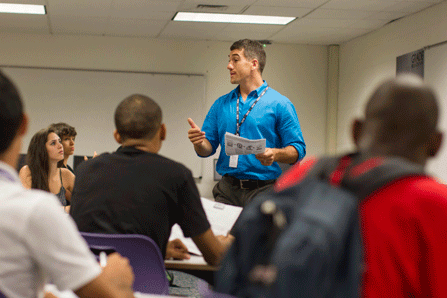 Ivan Silverberg teaches his American Studies class at Niles North High School in Skokie, Ill. This is the first school year that 34 Illinois school districts beyond Chicago will begin grading teachers on whether their students' test scores are improving. (AP)

In the drive to hold teachers more accountable for student learning, states are revolutionizing how they evaluate teachers.

This year, for example, 34 school districts in Illinois will begin evaluating teachers based in part on student test scores for the first time. (Some Chicago teachers have already been evaluated this way.)

Tennessee recently joined a handful of other states in tying student scores to whether their teachers' keep their licenses.

A new report from the Center for Public Education, an initiative of the National School Boards Association, found that states are tackling teacher evaluation in a variety of ways. For example:

Jim Hull, a senior policy analyst for the Center for Public Education and author of the report, said that until very recently, many teachers and administrators considered teacher evaluations to be useless exercises in bureaucracy.

“It was a missed opportunity to help improve our teachers,” Hull said. “The point of any evaluation is to ensure that your employees keep improving and provide them with support to fulfill the goals of the organization. It was obvious that wasn't happening.”

Policy makers started viewing teacher evaluations differently a few years ago when Republican lawmakers began demanding accountability for teachers at the same time that the federal government began providing incentives to states to redesign teacher evaluation systems through Race to the Top and No Child Left Behind. A 2009 report by The New Teacher Project, now known as TNTP, which was highly critical of teacher evaluation, was among the factors driving the national conversation, Hull said.

While there is bipartisan support for improving teacher evaluations, holding teachers accountable for student test scores has been controversial. Teachers' unions and some supporters caution against placing too much weight on student exams. They argue, for example, that student scores can vary considerably from year to year, which means a single year's data can yield little meaningful information.

Hull also found that states use the information collected about teachers in a variety of ways, including:

Most of the report's information, collected this past summer, came from the Center on Great Teachers & Leaders at the American Institutes of Research's Database on State Teacher Evaluation Policies.

Hull noted that many states are continually tweaking how they implement and use teacher evaluations, because they are so new and still developing.

“These are almost like living documents, living policies, where they are constantly being adjusted,” Hull said. “This is a very new concept and a very dramatic change in education policy, so there's no way to get it right immediately.”