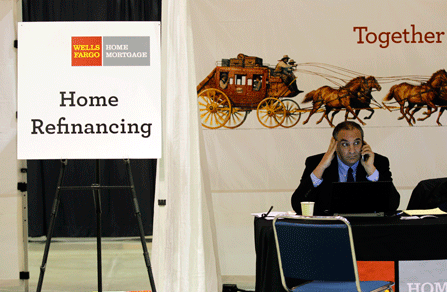 A home mortgage consultant with Wells Fargo staffs a booth at a “Home Preservation Workshop.” Instead of helping homeowners, states used at least $1 billion of the $2.5 billion they received in a legal settlement with major mortgage lenders to plug budget holes or pay for other non-housing projects. (AP)

Instead of helping homeowners, states used at least $1 billion of the $2.5 billion they received in a legal settlement with major mortgage lenders to plug budget holes, pay for pet projects or promote economic development.

The $2.5 billion is in addition to an estimated $51 billion in relief that Bank of America, Citigroup, JPMorgan Chase, Wells Fargo and Ally Financial (formerly GMAC) will provide to homeowners to settle states' charges that lenders were using improper mortgage practices. Those included “robo-signing” documents in foreclosure proceedings that resulted in widespread errors that pushed some people out of their homes unnecessarily.

States have no role in providing the $51 billion in relief to homeowners. But states do have wide discretion over the additional $2.5 billion, which was intended to ameliorate the housing crisis.

Instead, according to a state-by-state list compiled by the National Conference of State Legislatures, many of them found other uses for the money:

Other states, however, did use the money for housing-related initiatives. Connecticut, for example, used $22 million of its $26 million on emergency mortgage assistance. Colorado spent nearly half of its $50 million to help homeowners modify their loans, and the rest of the money on counseling and legal services. And Pennsylvania has set aside 90 percent of its $67 million for its housing finance agency, NCSL said.

Andrew Jakabovics of Enterprise Community Partners, a national affordable housing group, estimated states are spending only $1.4 billion of the $2.5 billion for housing-related purposes. Jakabovics co-authored an October 2012 report on how states were spending the money. At that point, six months after the mortgage settlement, states had announced plans to spend $966 million for housing and foreclosure-related activities, and had diverted $988 million to their general funds or spent it on other non-housing activities.

Iowa Attorney General Tom Miller, who took the lead in the joint state-federal investigation into the banks' mortgage practices, said state lawmakers have the authority to do what they want with the money.  “If policymakers in a particular state decided that the foreclosure crisis caused significant damage to their economy, one could make the case that that state should be able to use some of the settlement money to address that harm,” Miller said.

He also noted that by design, most of the settlement relief had gone not to state budgets but directly to borrowers.  “Let's not lose perspective on the overall settlement amounts,” he said.

The $51 billion figure that banks said they have provided in consumer relief has not yet been verified by the state and federal authorities who are monitoring the settlement. Under the settlement, the banks agreed to help all borrowers meeting certain eligibility requirements, rather than pledging to pay a specific lump sum. However, they are obligated to provide at least $25 billion in relief.

Nearly $30 billion of the $51 billion is helping borrowers keep their homes by forgiving principal or interest payments, according to a report from the Office of Mortgage Settlement Oversight.

States hit hardest by the housing crisis got the biggest chunks of the money.  California got the most money of any state, $20 billion, distributed among 187,000 homeowners.   Some 119,000 borrowers in Florida received some $9 billion in relief, and nearly $2 billion went to Arizona and Nevada, respectively. Combined, the money will help 46,000 consumers in those states.

The monitor's office of the National Mortgage Settlement has state-by-state data available and an interactive map.

Together, the five banks that agreed to the settlement control two-thirds of the nation's mortgage-servicing market, and state attorneys general said there was evidence of improper practices in every state. Only Oklahoma opted not to join in the settlement, choosing to settle separately with the five banks for $18.6 million.

But not everyone thinks the billions in “relief” to borrowers did much to help state housing markets or economies. Christopher Thornberg, founding partner of Beacon Economics, a research and consulting firm in Los Angeles, called California's share “chump change” in a state that has a $1.5 trillion economy.  The banks may have been sloppy in their lending practices, he said, but the settlement simply allowed politicians “to thump their chest and rail against the big evil banks,” he said.

Joseph A. Smith Jr., a former North Carolina banking commissioner who is supervising the settlement along with a committee of state and federal authorities, expects to issue a final report later this month, but his office said “the banks have or soon will meet their consumer relief obligations under the settlement. “

The settlement also for the first time laid out more than 300 national "servicing standards” aimed at making it easier for homeowners to seek loan modifications, including better  communication with borrowers, standards for executing documents in foreclosure cases and ending improper fees.

New York Attorney General Eric T. Schneiderman announced last week that he is suing Wells Fargo for failing to meet these standards.  He also said his office has dropped filing a similar lawsuit against Bank of America because that lender has agreed to make changes. Well Fargo has denied not adhering to the settlement's standards.

The mortgage agreement is the second largest civil settlement ever obtained by the state attorneys general. The $206 billion that tobacco companies agreed to pay the states in 1998 was larger, but those payments were spread over 25 years.