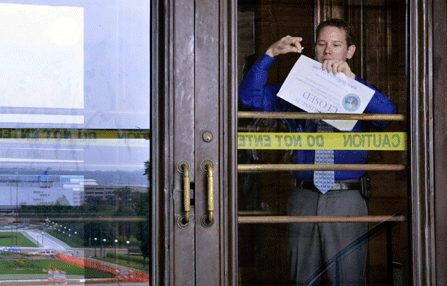 A Minnesota state Senate employee removes a “This Building is Closed” sign from one of the capitol's main entrances in July 2011, after an 18-day government shutdown. The state constitution required that Minnesota lawmakers be paid while 22,000 state workers were furloughed. (AP)

Members of Congress deadlocked over the budget are taking heat for receiving paychecks during the federal government shutdown. Given recent experience at the state level, it is no surprise.

The 27th Amendment, the most recent addition to the U.S. Constitution, protects congressional salaries. It says that Congress cannot make immediate changes to its own salaries; any changes must wait to be implemented after the next election.

The amendment took effect in 1992, but it was proposed along with the rest of the Bill of Rights in 1789. The idea has been around a long time, and states have included similar language in their own constitutions.

“No law, varying the compensation for the services of the Senators and Representatives, shall take effect, until an election of Representatives shall have intervened.”

“A member shall receive a salary and allowances as provided by law, but changes in the salary of a member shall not take effect during the term for which he has been elected.”

“In any year in which  the budget bill is not passed by the Legislature by midnight on June 15, there shall be no appropriation from the current budget or future budget to pay any salary or reimbursement for travel or living expenses for Members of the Legislature during any regular or special session for the period from midnight on June 15 until the day that the budget bill is presented to the Governor. No salary or reimbursement for travel or living expenses forfeited pursuant to this subdivision shall be paid retroactively.”

Illinois is one of those states, and a trial court ruled last month that Gov. Pat Quinn could not veto legislators' salaries. Quinn, a Democrat, wanted to dock lawmakers' pay until they passed a bill to reduce the state's pension costs. The Democratic leaders of the state House and Senate filed a lawsuit to block Quinn's move.

The governor said debates during the state's 1970 constitutional convention showed delegates were mainly concerned about legislative salaries being increased, not decreased.

“I understand where his heart is, but that's politics. That's not the law,” Cook County Circuit Judge Neil Cohen said in his ruling, according to CBS 2 in Chicago. “The governor violated the constitution. He had no right to do that, despite benevolent intent.”

Minnesota is another state that protects legislative pay in its constitution, so lawmakers continued collecting checks when state government shut down for three weeks in July 2011.

The standoff between Democratic Gov. Mark Dayton and Republicans who then controlled the legislature temporarily put 22,000 state employees out of work.

Roughly a third of Minnesota legislators voluntarily gave up their pay, as did the governor, although several collected back pay once the shutdown was over.

Voters in California tried in 2010 to link legislators' pay to their ability to pass a budget on time, after years of frustration in Sacramento over blown deadlines and deficits. Their efforts were initially successful, but the legal fallout puts the law's effectiveness in question.

The 2010 constitutional amendment, known as Proposition 25, tried to hit legislators in the pocketbook for not finishing a budget by June 15.

The next year, it was put to the test.

The official in charge of writing state checks, Controller John Chiang, a Democrat, relied on the new law when he docked legislators' pay in 2011. Legislators passed a budget on time, but Chiang said the budget plan had a $2 billion hole.

California's constitution requires budgets passed by the legislature to be balanced, so Chiang decided lawmakers had not met the requirements to get paid. He docked $583,000 in legislative pay, and 12 days later, lawmakers passed a new budget.

After the showdown, though, the Democratic leaders of both the House and Senate sued Chiang for overstepping his role. A trial judge agreed with them. “Wise or unwise,” the judge ruled, the controller's decision to dock legislators' pay was “an unwarranted intrusion into the legislature's budget deliberations.”

Chiang appealed the decision, and the appeal is still pending. In each of the last two years, California legislators have passed a budget on time.

Maine legislators considered a measure this year that would dock their pay in case of a government shutdown, but the proposal stalled.

Back in Washington, at least 138 members of Congress are currently working without a paycheck, either by refusing the money or donating it to charities, according to The Washington Post. Rank-and-file members earn $174,000 a year, while leaders make more. The U.S. House passed a bill Saturday to ensure federal workers would receive back pay when the shutdown is over.