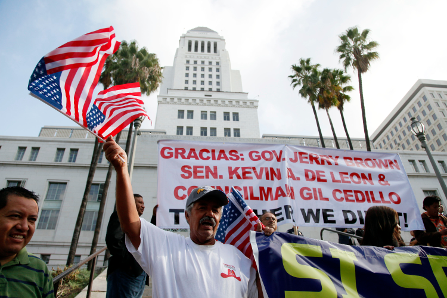 California, home to an estimated 2.5 million unauthorized immigrants, is backing out of a nationwide program to screen criminal suspects in jail for immigration violations.

Gov. Jerry Brown signed the so-called Trust Act on Saturday, along with several other immigration-related bills. The measure would block local police from holding suspects for immigration agents when they would otherwise be free to go, except in cases when the suspects are accused of certain major crimes.

“While Washington waffles on immigration, California's forging ahead,” Brown said in a statement. “I'm not waiting.”

Brown also signed a bill to allow unauthorized immigrants to practice law. He approved measures cracking down on immigration fraud. And he signed bills protecting immigrants against retaliation or extortion from people threatening to report their immigration status to authorities.

Immigrant rights groups backed the Trust Act, and policies like it, because they said the federal Secure Communities program leads to the deportation of too many people who do not pose a threat to society.

“The more the public learns about the failed  Secure Communities deportation program,  the more clear it becomes that it should be ended,” said Pablo Alvarado, the president of the National Day Laborers Organizing Network, which supported the Trust Act.

Last year, Brown vetoed a measure similar to the one that reached his desk last month, because he said it would allow too many people arrested for serious crimes to go free.

But the Trust Act received some unexpected support last week from the person who led the national effort to roll out Secure Communities.

Janet Napolitano, the recently installed president of the University of California, told the governor she supported the measure. Before heading the university, Napolitano was the U.S. secretary of homeland security who told states they could not opt out of sending the federal government suspects' fingerprints for immigration checks.

Brown's signatures on the Trust Act and other immigration proposals cap an eventful week for immigrant rights groups in California. On Thursday, Brown signed a measure that will allow unauthorized immigrants to get driver's licenses by 2015.

California is the 11th state to permit unauthorized immigrants to drive, and the seventh state in the West to do so. At the beginning of 2013, only three states granted them that privilege.

Brown signed the Trust Act the same day immigrant groups held more than 180 demonstrations throughout the country to support an overhaul of the nation's immigration laws and to call for more immigrant-friendly policies at the state and local level.