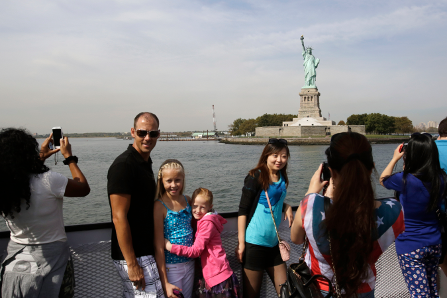 Tourists take photos of the Statue of Liberty while riding a tour boat in New York Harbor, but can't visit the statue because of the government shutdown. (AP)

Visitors spend about $76 million a day in communities near national parks, the National Park Service estimated before the federal government partially closed down because of failed budget talks between Congress and President Obama.

From the Grand Canyon to the Statue of Liberty, the closing of 401 national parks isn't just disappointing campers, school children and wedding parties. Local communities and states are losing millions of dollars in lost tourism and tax revenue as the federal budget impasse lingers.

Miriam Robbins, a spokeswoman for the nonprofit Grand Canyon Association, said her organization is losing about $30,000 a day because it can't operate its seven stores in the park or offer classes or hiking trips in the park. The proceeds go back to the Grand Canyon.

October is peak season for many tourists who want to see the changing autumn leaves and for weddings in some national parks. Four weddings scheduled for the first week of the shutdown at Yosemite, for example, face cancellation, according to this interactive map from the NPCA.

The shutdown is costing the National Park Service $450,000 a day in lost revenue from fees collected at entry stations and fees paid for activities in the park, such as camping, boat ride and cave tours.

Every federal dollar invested in national parks generates $10 in economic activity, the NPCA said. The parks also support more than a quarter-million jobs and more than $30 billion in private-sector spending each year, the group said. 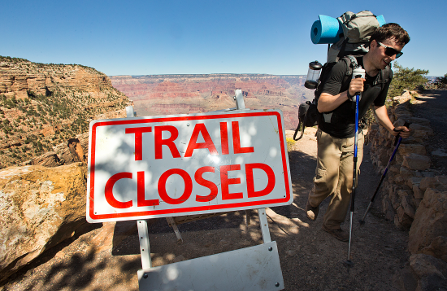 A hiker is told the Grand Canyon National Park is closed because of the federal budget crisis. (AP)