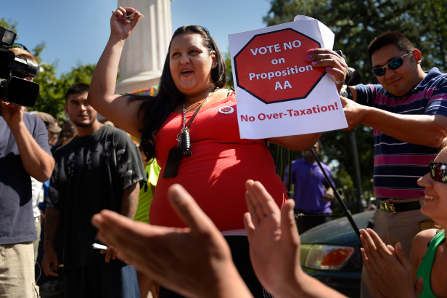 Janet Osborn, 27, was the first person to get her free marijuana joint at Civic Center Park in Denver during the formal launch of “No on Proposition AA” campaign, which opposes the highest tax increase in Colorado history—a 30 percent state tax on recreational marijuana. (Getty Images)

In Colorado, voters will consider a huge tax hike on newly legal marijuana. New Yorkers could expand gambling. And Washington voters are in the midst of a multimillion-dollar campaign over the labeling of genetically modified foods.

Voters in six states will consider a combined 31 ballot questions on Nov. 5, according to the National Conference of State Legislatures. Many are non-binding advisory votes or relatively minor bonding questions. But in a light year for elections, some have sparked near-record-breaking levels of campaign spending.

Stateline looked at some of the most consequential or controversial issues on the ballot this fall.

One of the more expensive ballot fights is in Washington, where supporters and opponents have poured almost $24 million into a campaign over whether genetically modified foods, known as GMOs, should have to be labeled.

The Washington debate is similar to the fight that played out in California last year, when voters rejected a similar measure that was fiercely opposed by agricultural and food-business interests and backed by environmentalists and other liberal groups.

“It's really a proxy battle over genetically modified food, generally,” said Mark A. Smith, a political science professor at the University of Washington. Those opposing the labeling often see the proposals as a watershed: If one state adopts them, the theory goes, more will follow.

With that in mind, the opposition is mobilized. More than two-thirds—$17.2 million—of the total raised is for the opposition. But supporters have millions as well.

The outcome could hinge on turnout. In much of the state – including more conservative rural areas – there are few if any high-profile matters on the ballot to draw people to the polls. But in liberal Seattle, residents will also decide a closely contested mayoral race, which could boost turnout for those who support labeling.

Colorado: Taxes in the Balance

A pair of tax measures—one levying taxes on newly legal marijuana, the other altering the state's income tax system to support education—could make history in Colorado.

On marijuana, the question is whether the state should tax marijuana sales in two different ways, potentially bringing in a windfall of revenue but also driving up the cost of the drug. Opponents call it the biggest tax increase in state history.

The first $40 million from a 15 percent tax on the wholesale price of retail marijuana would go toward education. The second 10 percent sales tax would be in addition to the state's 2.9 percent sales tax, with proceeds earmarked for regulation, public health and police activities related to the legal pot market. Of those revenues, 15 percent would go back to the cities and counties where the sales occur.

A vocal campaign against the higher marijuana taxes has taken shape in the state, with some arguing it unfairly targets marijuana users. Others say taxing too much will just drive the business back underground. Supporters say the new taxes are necessary to fund the regulation of the new market.

The second tax measure would replace the state's flat income tax system with two tiers, with the proceeds earmarked for education. It would collect nearly $1 billion, according to state estimates. It would also require 43 percent of all state tax revenue to go toward education.

Democrats see the income tax measure as an opportunity for two significant victories: One, to open the door to progressive taxes in the state; and two, to bolster education for years to come.

But in Colorado, where the state has enacted a Taxpayer Bill of Rights that requires all tax hikes to pass a popular vote, anti-tax sentiment runs deep. Thad Tecza, a professor at the University of Colorado, said that history, combined with conservatives' high-profile victory in a pair of recent recall elections that turned on gun regulation, have emboldened right-leaning activists.

“Both of these, there's going to be lots of money spent in favor of them, and not a lot of money opposed to them,” Tecza said. “But the general mood of the state is anti-tax.”

Gov. Andrew Cuomo's desire to attract more tourists—especially to upstate New York—is behind his push to expand gambling. This fall, New Yorkers will consider a constitutional amendment that would allow lawmakers to “authorize and regulate” up to seven casinos. The amendment doesn't specify whether the state will tax privately-run casinos or open its own. Either way, supporters say the new casinos would create jobs and generate tax revenue that could be used to boost school funding or lower property taxes.

Business interests have lined up behind Cuomo, but people traditionally wary about expanded gaming are concerned. A statement from the New York State Catholic Conference raised familiar worries: “With their flashing lights, free-flowing alcoholic drinks, all-night hours and generally intoxicating atmosphere,” the statement said, “casinos are more likely than other gambling options to lead to bad decisions and catastrophic losses.”

A Siena College poll released this week shows varying support depending on how the question is posed. When asked generally about expanding gambling, 46 percent of respondents said they supported it, and 46 percent said they opposed it.

But when respondents were asked the specific wording of the ballot question—which says the casinos would be built “for the legislated purposes of promoting job growth, increasing aid to schools, and permitting local governments to lower property taxes through revenues generated”—support jumped to 55 percent and opposition fell to 42 percent.

A lawsuit filed this week by a Brooklyn attorney says the phrasing is unconstitutional.

New Jersey could become the 11th state with a minimum wage that increases automatically if voters approve a constitutional amendment this fall.

The amendment would set the rate at $8.25 per hour, up from the current $7.25, and provide for annual increases. It also would require the state to increase its own minimum if the federal minimum (currently $7.25 per hour) ever exceeds it.

As Stateline previously reported, more states are adopting minimum wages that are indexed to inflation or increases in the cost of living. Arizona, Colorado, Florida, Missouri, Montana, Nevada, Ohio, Oregon, Vermont and Washington already have such policies, and in all of them except Vermont the moves were approved at the polls.

Texas: Questions on Water and Housing

With drought a continuing concern, Texas voters this fall will consider a constitutional amendment that would tap the state's rainy day fund for $2 billion to pay for water infrastructure projects. The measure would grant the Texas Water Development Board, appointed by the governor, the power to direct funds to priority projects.

There are eight other amendments on the ballot, but as University of Texas professor and former state legislator Sherri Greenberg said of the water issue, “This is big.”

“There will be a tremendous push to pass that one,” she said.

The state's Proposition 6 has spawned strange political alliances, with Republican legislators backing its passage along with business interests and environmental groups such as the state's chapter of the Sierra Club. The opposition is a mix of rural Texans, tea-party-style fiscal conservatives and staunch conservationists.

The divide is rooted in long-running disagreements over water rights in the state.

Supporters say the state has waited too long to enact a water management plan. Business leaders see the additional funding as an investment in the future, with the state's growth potentially hamstrung until a long-term water solution can be implemented. But opponents contend the arrangement would disregard the concerns and input of local residents.

A poll released this week by the nonpartisan Texas Lyceum found that 49 percent of likely voters support the plan, while 36 percent are opposed. Because turnout is expected to be extremely low, the results could be much closer.