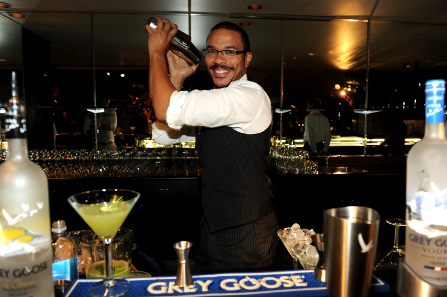 States raised tobacco and gambling taxes in recent years and even taxed marijuana in two states. Another “sin” tax— on alcohol— has largely escaped change in recent years thanks to a strong liquor lobby which reframed the liquor tariff conversation from “sin” to “hospitality.”

In New Mexico, for example, Santa Fe area officials wanted the legislature to approve a “local option” bill to allow them to raise taxes on alcohol, just in their specific city and county.

The legislature nixed it, arguing that the state's liquor taxes were not going for their original purpose, to provide alcohol counseling and treatment, and now was not the time to allow any jurisdiction to add to the problem. Taxes stayed the same at $1.70 per gallon of wine, $6.06 per gallon of hard liquor and 41 cents per gallon of beer.

In Minnesota, Rep. Karen Clark, a Democrat, proposed hiking the liquor excise tax by pennies a glass and using the extra revenue – an estimated $190 million – toward health care costs associated with alcohol abuse. But the legislature would have none of it, preferring to stick with the current rates of $1.20 per gallon of wine, $8.83 per gallon of hard booze and 48 cents per gallon of beer, 10th highest in the nation, according to the anti-tax Tax Foundation.

In both states, as in others around the country, restaurants, hotels, the tourism industry and the powerful liquor lobby rose up to challenge the proposals. And then there's the fact that more than half of American adults admit to being “regular” drinkers, and many more have an occasional drink, such as champagne on New Year's Eve or a beer at a baseball game.

“I don't know if anyone has ever proven this, but I think that as more people are subject to a tax, the more unpopular it gets,” said Joe Henchman, vice president of legal and state projects at the Tax Foundation. “Cigarette taxes have grown more popular as the number of people paying them has dwindled. Beer and alcohol are essentially universally consumed.”

According to the Distilled Spirits Council of the United States (DISCUS), which is active in nearly every state that attempts a liquor tax increase, 335 out of 364 major alcohol tax “threats” in the states were defeated since 2001.

An exception was Washington state which privatized liquor sales in 2012. Privatization most times results in a decrease in alcohol prices, but Washington coupled it with a tax increase on distilled spirits of up to $35.22 a gallon, according to the Tax Foundation.

The National Institute on Money in State Politics, which tracks political contributions and lobbying in the states, reported that the liquor industry spent nearly $16 million on state political candidates in 2012, across all states except Wyoming. While there's not necessarily a straight line from donations to the quashing of liquor taxes, it shows the industry is active in state politics.

Denise Roth Barber, managing director of the institute, said: “What you do know is that the industry was definitely working the legislature. Whether or not that had an influence on the lawmakers' decisions is not known.”

Efforts to kick up the alcohol tax failed in most states in 2013, including:

Rhode Island was an anomaly of sorts. The state increased the alcohol excise tax by $1.65  a gallon on liquor and by lesser amounts on beer and wine, but repealed the alcohol sales tax, presumably to compete with neighboring Massachusetts.

Massachusetts imposed a 6.25  percent sales tax on alcohol in 2009, but repealed it just a year later in a ballot initiative. At the time, media reports said the liquor industry and its allies contributed $2 million of the total $2.5 million spent by lobbyists.

In each of the states where a liquor tax hike was proposed, lobbyists went to work.

“It's a constant effort because you have new people coming into the legislatures,” said Frank Coleman, senior vice president of DISCUS. “We change the conversation from ‘sin' taxes to ‘hospitality' taxes. We are a very serious part of the hospitality industry.”

Back in New Mexico, Santa Fe City Councilor Patti Bushee told local reporters she was disappointed in state representatives from her area for voting against allowing communities to raise the liquor excise tax and accused them of being “beholden to the liquor industry.”

Nonsense, said Democratic Rep. Carl Trujillo, one of those Bushee singled out. “I'm not beholden to anybody,” he said. “I'm beholden to what's right for New Mexico.” He voted against the measure because he said it was another example of the problem of tax revenue not going where it was intended, he said. The legislature, he said, has chipped away at the original intent of the tax, to the point where only about 30 percent goes toward treatment.

Democratic Rep. Jim Trujillo, another Santa Fe representative and Carl Trujillo's uncle, also said liquor industry contributions had nothing to do with it. “To my campaign, they contribute very little. I didn't take that into consideration at all,” he said, pledging to reintroduce legislation to get more money for treatment centers.

He also said that having different liquor taxes across the state would have been “a nightmare for restaurants and hotels.”

According to the National Institute on Money in State Politics, representatives of the beer, wine and liquor industry gave about $49,000 to New Mexico assembly candidates in 2012. Jim Trujillo got $1,000; Carl Trujillo received $300.

In Minnesota, Clark's bill would have increased excise taxes on beer from $2.40 to $13.97 on a 31-gallon barrel, or about three cents a drink. Wine taxes would have gone up nine cents a glass and liquor 10 cents a drink.

The distilled spirits lobby papered the state with a flier insisting that any increase would result in the loss of an estimated $30 million in retail sales and the jobs of 3,700 “hard working employees.” The National Institute on Money in State Politics shows alcohol interests gave $47,000 to state legislative candidates in 2012.

“The tax was defeated by a large hospitality coalition effort,” said DISCUS spokesman Ben Jenkins. “We highlighted how increasing the excise tax would destroy hospitality jobs among those who need them most.” 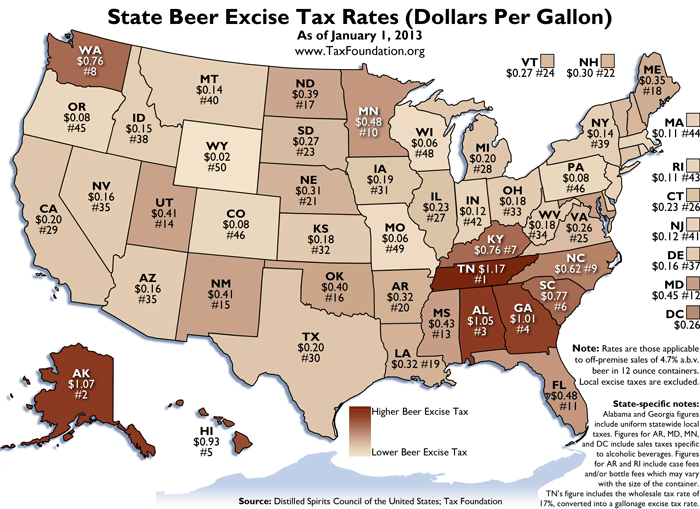 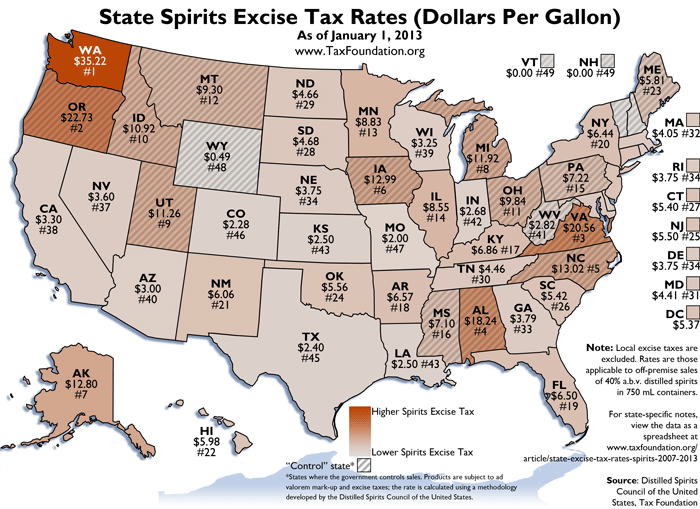 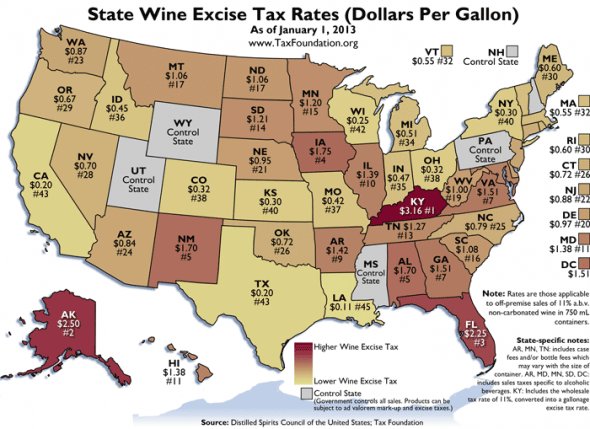 Maps are courtesy of Tax Foundation.