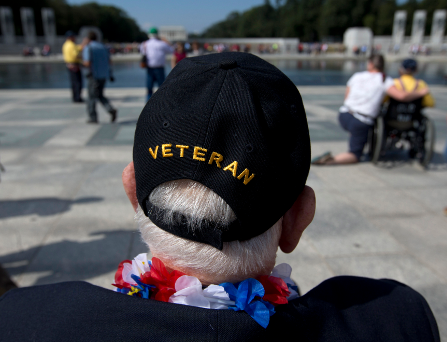 Veterans like World War II Veteran George Bloss, from Gulfport, Miss., crossed barricades to visit the National World War II Memorial in Washington on the first day of the government shutdown. Some veterans benefits could be at risk if the shutdown continues for long. (AP)

Veterans, who already face a lengthy backlog in getting help, risk not getting their disability and pension benefits at all next month if the federal government shutdown lasts several weeks.

The Department of Veterans Affairs said it has enough money to process veterans' claims for pensions, compensation, education and vocational rehabilitation programs through late October, but a prolonged shutdown would suspend those programs once the money runs out.

And while veterans' medical care is protected, some call centers and hotlines have already been suspended under the budget impasse between Congress and the White House.

“B/c of #shutdown, @VAVetBenefits overtime ends today. After decreasing backlog 30%, we project it will start increasing,” Tommy Sowers, assistant secretary for public and intergovernmental affairs at the VA, tweeted on the first day of the shutdown.

States play a key role in ensuring that veterans receive their benefits. Ever since World War II, each state has developed its own department or agency specifically to manage veterans' affairs.

Once the state processes a veteran's pension, compensation and disability claim, that claim is then sent to the federal VA “and at that time, it's out of our control,” said Robert Horton, spokesman for the Alabama Department of Veterans Affairs, with the federal VA either approving or rejecting the claim.

State veterans agencies can offer additional programs to veterans. Collectively, states contribute more than $6 billion annually for veterans and their families, according the National Association of State Directors of Veterans Affairs, an organization that dates back to 1946.

“If the federal VA has to lay off employees, then claims won't be processed and veterans possibly won't receive their benefits or payments for pension and compensations, but right now there is no effect on the state VA,” Horton of the Alabama VA said.

Which VA Services Are Protected?

All VA medical facilities and clinics will remain fully operational during the federal shutdown, including VA hospitals. In 2009, Congress passed a law to fund the VA one year in advance. This allows the VA health care system to plan ahead and ensures that VA health care is funded for an additional year beyond the government shutdown, according to a  “Government Shutdown FAQ” from Tom Tarantino, chief policy officer for the Iraq and Afghanistan Veterans of America (IAVA), a nonprofit, nonpartisan organization for new veterans.

“While veterans may be more protected than other constituencies, a government shutdown does not bode well for top priorities within the veterans' community,” Tarantino wrote.

Among the VA services that are affected under the shutdown:

Bill Allman, project analyst at the Washington state's veterans benefit enhancement projects, called the shutdown unfortunate. His department has spearheaded a project that has moved nearly 10,000 veterans from the state's Medicaid rolls to the VA's health care system using a federal database known as the "Public Assistance Reporting Information System," or PARIS.

Allman said the federal manager of the PARIS system has been furloughed until a budget resolution can be reached.  “This may drag on much longer than any of us predicted,” he said. “It really drives home the impact that the shutdown has on people's lives, as well as the additional work that it creates for others.”