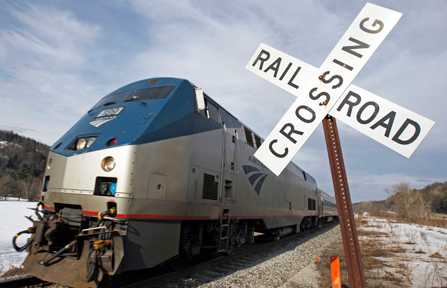 The Amtrak Vermonter heads south in Middlesex, Vt. in March 2013. A day before the deadline, Vermont was one of seven states still negotiating with Amtrak Monday (Sept. 30) to keep service on short passenger routes past mid-October. (AP)

Four states missed a Tuesday deadline to reach agreements with Amtrak to fund shorter routes, but the railroad still hopes to keep trains on those routes running beyond the middle of October.

“We continue to work with the other states and are hopeful for a positive outcome,” said Amtrak spokeswoman Kimberly Woods.

California, Indiana, Illinois and New York still do not have agreements. Fifteen states already have inked deals with the company, which is subsidized by federal money.

The Oct. 1 deadline was the same as the cutoff date for Congress to reach a budget deal to avert a government shutdown, but the Amtrak deadline was unrelated to that fight. Instead, it is the result of a 2008 law that pushes states to help pay for 28 routes shorter than 750 miles. Those routes, which cross 19 states, carry over half of Amtrak's passengers.

Amtrak says service will stop on the routes on Oct. 16 if new agreements are not finalized. The company has already notified employees that service may end.

Negotiations stretched into the eleventh hour for several states: