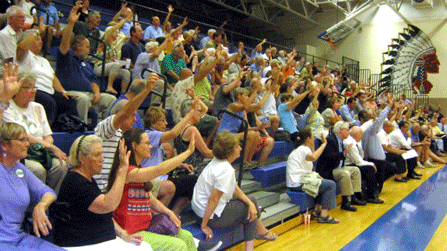 Residents opposed to the consolidation of Michigan towns Saugatuck and Douglas raise their hands at a community meeting on the merger. Local governments across the country are considering consolidation to help survive the Great Recession. (Credit: Lindsey Smith / Michigan Radio)

In Saugatuck and Douglas, two quaint cities on the coast of Lake Michigan, people have sent their children to the same schools and cheered for the same teams since the 1960s. They share police and fire services, a transit system, a library, water and sewer services and a harbor authority.

Together, they have a total population of about 2,200.

But an upcoming vote on whether to take the relationship to the next level by officially merging the two towns has divided residents.

The campaign slogans for and against the merger are, respectively, “We're Better Together” and “We're Already Together.” Points of contention range from the impact on snow removal to which community would bring greater assets to the new union.

Debates about the right size of government raged during the Great Recession, as shrinking revenues squeezed budgets at every level. But over the last five years, the total number of governments increased slightly, according to the U.S. Census of Governments, a five-year count of every unit of government in the country. 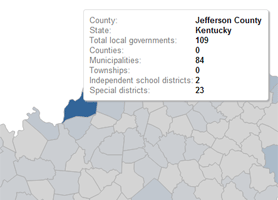 How many local governments are there in your county? In your state? Find the answer in this interactive visualization of the Census of Governments.

The total number of governments increased slightly because of an uptick in the creation of special districts that serve one specific function, like trash pickup or mosquito control. But the number of towns and school districts declined between 2007 and 2012. The census showed 159 towns or townships disappeared during that time.

Though it might seem counterintuitive, fiscal duress helped shrink the overall number of local governments and increase the number of special districts.

Hasina Squires, government affairs director for the Special Districts Association of Oregon, said her organization has seen a surge in inquiries from local governments about how to form special districts.

Researchers attribute the drop in the number of towns and school districts almost entirely to consolidation, the same proposition throwing Saugatuck and Douglas into upheaval.

"There's no easy consolidation, but if the people in these communities wanted to make this work it shouldn't be so hard to do," said Eric Lupher, director of local affairs for the Citizens Research Council of Michigan, which was commissioned by the two cities to study the potential impact of a merger. The report estimated annual savings of $467,191, which is about 12.1 percent of the two cities' combined annual budgets.

The fiscal realities driving the proposed Saugatuck and Douglas merger are a symptom of the Great Recession, which ravaged state and local government budgets and forced the discussion of consolidation in all layers of government, including towns, school districts and special districts.

Before governments can consolidate, the plans are subject to at least one popular vote. They often fail.

“You often see popular votes go down in dramatic fashion,” said Donald Boyd, senior fellow at the Nelson A. Rockefeller Institute of Government. “It's easy for opponents to sow uncertainty over what's going to happen. It's easy for voters to become worried about possible changes without really understanding potential benefits.” 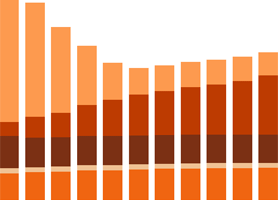 How has the number and mix of local governments changed? Explore trends from 1942 to 2012.

The decline in the number of towns and school districts in 2012 actually could have been larger, given the enormity of the effects of the recession on state and local finances, said Molly Jackman, a fellow in governance studies at Brookings Institution.

“Any time you create government, you develop entrenched interests in sustaining that institution, so even in tough fiscal times, overcoming that interest is really difficult,” Jackman said.

Beginning in 2007, lawmakers in New York, New Jersey, Indiana, Illinois, Ohio, Michigan and Maine passed legislation and created commissions to make it easier for local governments to merge, and in most cases offered hefty financial incentives to governments willing to try it out.

But none of those states saw a significant dip in the number of governments. For instance, in New York, school districts willing to consolidate can get up to a 40 percent increase in their state funding, plus additional money to build new school buildings. Still, between 2007 and 2012, New York shed only one school district.

In Illinois, which has the most governments of any state, consolidation efforts have been opposed by local elected officials afraid of losing their own jobs—and the jobs they dole out to supporters.

“The situation is a classic example where the wishes of the majority are not very intense and wishes of the minority are very strong,” said state Sen. Daniel Biss, a Democrat who sponsored a state law passed in August that will allow for the consolidation of the city of Evanston and township of Evanston.

“I got freaked-out emails from township officials all across the state over this little bill about Evanston," he said.  "That tells you the level of anxiety that the township lobby feels."

Bryan Smith, executive director of Township Officials of Illinois, said township officials can see and respond to the needs of their communities in ways that aren't possible with bigger forms of local government.

“Townships are able to provide the services that they do very efficiently and more effectively than any other governments could,” he said. “A larger unit of government is going to lose touch with the people that they serve and the quality of service is going to diminish."

Preserving towns is not always a priority. In places such as Kansas, growing cities often annex towns that get in the way of expanding city boundaries.  In Kansas, 85 towns disappeared from 2007 to 2012, which is likely due to annexation, said Xan Wedel, an information specialist with the Institute for Policy and Social Research at the University of Kansas who specializes in Kansas census data.

“Kansas has a lot of unincorporated land, so cities are constantly changing boundaries as they go,” Wedel said.

Consolidations and mergers are the most severe choices, but they're not the only ones. Think of consolidation as a continuum: at the beginning is a shared services agreement, like sharing a fire department or public health director.

This far more common type of consolidation doesn't register in the Census Bureau's count and isn't very controversial. Municipalities testing the consolidation waters generally ease into agreements by sharing more and more services, until consolidation seems like a natural step.

Take Princeton Borough and Princeton Township in New Jersey, the first governments to merge under a 2007 law which made it easier for local governments to consolidate. The governments had been talking about merging since the 1950s and by the time they finally agreed to merge in 2011, the communities already had 13 shared service agreements.

“The only services we hadn't merged were the police and public works departments,” said former mayor of Princeton Township Chad Goerner. After about 70 public meetings and dispelling myths about how a merger might force a massive cultural change in the community of about 30,000, voters approved it.

“People finally realized that the community's identity does not rest in the town hall,” said Goerner. “It's based on neighborhoods, and those don't change with consolidation.”

The merger was the largest consolidation in New Jersey in more than a century. The state committed to paying 20 percent of the costs associated with the merger.

So far, tax bills are lower for individual residents, and the consolidated government will save about $4 million each year compared to the costs of maintaining two governments, according to Goerner, who now works as a consultant for governments considering consolidation.

Still, government consolidation doesn't always produce actual cost savings. One reason is taxes: if two towns have different tax rates, the leveling of tax rates can eliminate any savings towns could achieve. Employee contracts can be another hurdle, if, for instance, one town's contracts are more generous than another.