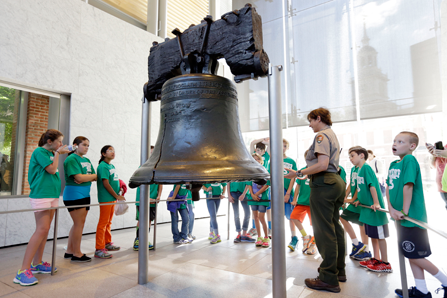 School children visit the Liberty Bell in Philadelphia on Monday. Independence National Historic Park is just one of the hundreds of federal parks and monuments that will close in a federal government shutdown. (AP)

The civilian federal workforce of 1.85 million people scattered across all 50 states will feel the fallout of the government shutdown immediately. Governors warned of dire economic consequences.

With no agreement on a spending blueprint, the government must shut down all but essential activities. If past crises are a guidepost, about half of federal workers will be sent home. Federal parks and monuments will close.

Governors called on Congress to solve the budget crisis, which springs from Republican opposition to paying for the Affordable Care Act. State leaders said a shutdown will jeopardize states' fragile recovery from the recession.

“Unfortunately, the possible consequences to state economies of a federal shutdown or not increasing the national debt limit are severe,” the National Governors Association wrote to congressional leaders Monday.

“A lack of certainty at the federal level from a shutdown therefore translates directly into uncertainty and instability at the state level. That uncertainty can lead to the suspension of programs and services, increased borrowing or even layoffs,” said the letter, signed by NGA chair Mary Fallin, the GOP governor of Oklahoma, and NGA vice chair John Hickenlooper, Democratic governor of Colorado.

Not all states are created equal, in terms of pain from the shutdown. The heaviest concentration of federal civilian workers is near the heart of the federal government—more than 1 in 5 live in Virginia, Maryland and the District of Columbia.

The Office of Personnel Management issued a 27-page document providing guidance for shutdown furloughs. Agencies were notifying their staffs about who is essential and who is non-essential during a shutdown.

As the midnight deadline passed to fund the federal government, states began to tote up potential losses:

Visitors to Arizona's national parks, including the Grand Canyon, spend $2.7 million a day, revenue that would evaporate in a shutdown. In Colorado, where the federal government is the state's largest employer, officials fretted about federal disaster aid pending to address millions in dollars in property and infrastructure losses from recent floods. In New Jersey, where Superstorm Sandy devastated the coastline almost a year ago, rebuilding efforts could be delayed if federal funds slacken.

In Oregon, the state's deputy chief financial officer worried about federal dollars drying up for safety net programs, saying “It's all about cash flow.” And in Virginia, state officials contemplated drawing on their state contingency fund to offset dollar losses from Washington.

There is a roadmap of sorts from the effects of the 1995-1996 shutdown, according to the Congressional Research Service. Then, work on more than 3,500 bankruptcy cases was suspended as was the hiring of 400 border patrol agents. Almost 370 National Park Service sites were shuttered, at a loss of 7 million visitors, and another 2 million visitors were turned away from closed national museums and monuments. Up to 30,000 applications by foreigners for visas were unprocessed each day, as were 200,000 American applications for passports.