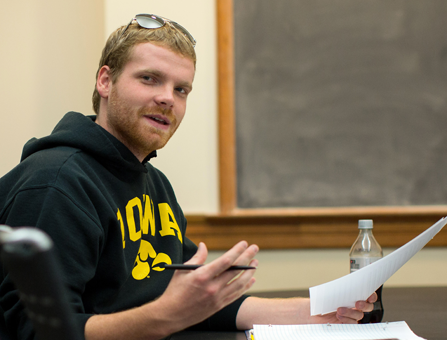 Afghanistan veteran Dan Tallon of Davenport, Iowa talks during a class at the University of Iowa. A growing number of colleges, universities and states are giving veterans college credit for their military training and experience. (AP)

At least 26 states have passed legislation directing their boards of education to develop statewide policies to provide academic credit to the largest influx of veterans since the end of World War II, according to the National Conference of State Legislatures. The Education Commission of the States, a Denver-based nonprofit organization, says 19 states have enacted related legislation in the last two years alone.

“There's a lot of interest in a lot of different circles [in helping] veterans,” said Cathy Sandeen of the American Council on Education (ACE), which represents the presidents of U.S. colleges and universities.

More than 2,300 schools rely on ACE to review various types of military training and experience and recommend how to translate them into academic credits.  But as is the case with AP exams or transfers from another school, each school makes the final decision on how much credit, if any, to award.

“The problem is it's just a recommendation, and schools can choose whether or not to accept it,” said Michael Dakduk, who heads the Student Veterans of America, a coalition of student veterans groups on college campuses. Dakduk served as a Marine in both Iraq and Afghanistan.

These states have enacted policies to award college credit for military experience and training since 2012, according to Matthew Smith, a policy analyst with the Education Commission of the States:

Veterans on college campuses face obstacles their fellow students do not. Many are coping with physical or mental injuries that make studying a struggle. Others flounder without the structure and camaraderie of the military, or have trouble relating to 18-year-olds more interested in partying than schoolwork.  Some veterans have to balance their academic responsibilities with families, jobs, or additional deployments.

Some colleges have tried to ease veterans into campus life by hiring counselors trained in the military culture, or by creating centers where veterans can share stories or hold study groups. A 2011 report by the American Council on Education lauded the effectiveness of those services.

Such steps have become increasingly vital since the 2008 passage of the Post-9/11 G.I. Bill, which provides education aid to the 2 million service members who have served in Iraq and Afghanistan.  Under the law, veterans get up to 36 months of education benefits, payable for 15 years following their release from active duty. In addition to tuition aid, benefits include a monthly living allowance and a book stipend of $1,000 per year.

Since the law took effect in 2009, close to 1 million service members have received more than $25 billion in aid, which can be used to attend any public or private school.

“The one word speech I usually give is graduate, graduate, graduate,” Veterans Affairs Secretary Eric K. Shinseki told a gathering of student veterans earlier this year. “If I sound like your dad, I am. I'm paying most of your bills.”

What is Military Service Worth?

As veterans have flooded the nation's campuses, efforts to translate military training and experience into academic credit have taken on new urgency. But the challenges for colleges and universities are considerable. Schools often struggle to determine exactly what was covered in a military training course, or whether the instructor would pass academic muster. Sometimes military training doesn't correspond to any course a school offers.

Some decisions are easy: A former medic probably received training relevant to a nursing degree, and a student pursuing a degree in mechanical engineering probably deserves credit if she served in the military as an aircraft technician. But what if she worked as a public relations officer?

Clackamas Community College in Oregon has tried to tackle the problem by creating 21 “bridge” courses to fill in the gaps that may have been left by military instruction. Veterans can combine the courses with their military experience to earn credits in areas as varied as law enforcement, business administration and English.

Ken Sauer of the Indiana Commission for Higher Education said the collaborative is trying to figure out what kinds of student data that institutions and states should collect to track veterans' academic success. Meanwhile, some schools in the participating states are plowing ahead.

In Illinois, community colleges have designed a new course for basic medical corpsmen to become licensed practical nurses. And in Indiana, veterans who served in the military police or in military prisons can receive credit toward an associate's degree in criminal justice at Ivy Tech Community College.

Minnesota has created a web site to help veterans determine the credits they might qualify for in state colleges and universities, based on their branch of service, occupation, training dates and rank. For example, a combat engineer in the Army at the rank of E6 might be eligible for credits in business administration, finance management, management and marketing at North Hennepin Community College.

“These examples benefit all parties,” Sauer recently told a congressional committee. “They save money for both the veteran and the taxpayer, they help ease the transition from military to civilian life—which can be especially difficult for veterans who have seen combat—and they also contribute toward a better educated workforce.”

Dakduk argues that colleges and universities that manage to find ways to award academic credit to veterans will end up reaping the benefits.

“By providing academic credit for military experience schools can attract more veterans to their campus which ultimately adds diversity to, and enriches, the student community,” he said.